Trump: Madoff is a 'sleazebag' 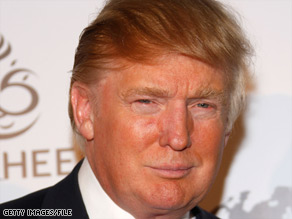 Donald Trump said investors who lost money in a Ponzi scheme were victims of their own greed.

Trump recently hosted a party at his Palm Beach, Florida, estate, Mar-a-Lago, that was attended by several people who say they were victims of an alleged $50 billion Ponzi scheme run by Madoff.

Madoff, 70, is a former chairman of Nasdaq. He was charged last week with fraud.

CNN: How angry are people at this situation with Madoff?

Donald Trump: ... The people in Palm Beach, many of those people have been just ripped off by this sleazebag, and they'll never see the kind of money that they've seen. You have some people gave 100 percent of their net worth to him in trust, because they trusted him, they trusted his family, they trusted everybody, and now they literally are selling their houses in order to live. And some of them mortgaged their houses in order to give that money to this Madoff. And it's really a terrible thing. I'd see him around Mar-a-Lago, I'd see him around Palm Beach -- and he's a disgrace.

Watch the possible ramifications of the Madoff case »

CNN: ... How did he get away with this? How did so many smart people entrust somebody -- and we keep hearing over and over again, 100 percent of their money going to this guy. Would you ever let 100 percent of your money go to something, even if you trusted the person?

I mean, he was a Svengali for rich people. There are Svengalis for women; this guy was a Svengali for rich people -- very rich people. But when you think of a person putting up 100 percent of their net worth and even mortgaging their house, even though they had a lot of cash -- mortgaging their house to get more cash to this guy -- and now they're going to have to go out, literally, and maybe work in a drugstore. I don't know what they're going to do.

CNN: Did you lose money from Madoff?

CNN: Some are blaming the [Securities and Exchange Commission], saying for years they did not investigate any claims. Chairman Christopher Cox said there were some credible accusations against Madoff made nearly a decade ago that were never referred to the commission to act. So what's your take on the oversight, how the SEC and government handled this?

Trump: I would not blame the SEC. This guy was a total crook. The people in his own organization supposedly didn't know about it. Now, that's another thing; I find that hard to believe. He's got two sons, and they didn't know about it? And they worked there for years? I think the whole thing is a swindle. I think even that's a swindle: The father said, "Look, you guys turn me in and pretend you don't know anything and I'll save my two sons." But it's impossible for me to believe that his sons didn't know about this.

CNN: So you also think it's impossible that he acted alone.