WASHINGTON (CNN) -- Five security guards from Blackwater Worldwide have been indicted on charges related to a 2007 shooting in which 17 Iraqis were killed in a Baghdad square, two sources said Friday. 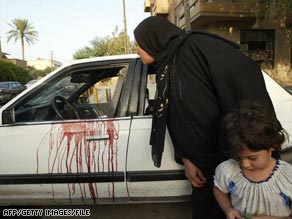 An Iraqi woman looks at a blood-stained car of two women killed in the 2007 Nusoor Square shooting.

A sixth security guard is in plea negotiations, the sources told CNN. The exact charges handed up by a federal grand jury were not revealed.

The sources requested anonymity because the indictment remains under court seal. It is expected to be made public by Justice Department officials as early as Monday.

The Justice Department had no comment on the development, and defense attorneys for the men could not be reached for reaction.

The State Department, which employed Blackwater to protect U.S. diplomats and other employees, also had no comment.

Blackwater said it wouldn't comment until there's an official announcement.

But an Iraqi investigation called the killings "premeditated murder" and accused the guards of firing on civilians indiscriminately. The first U.S. soldiers to arrive on the scene also told investigators they found no evidence the guards were fired upon, sources told CNN.

Among the potential problems is the uncertain limit of a law passed by Congress that prevents prosecution of military personnel or others working for the military and leaves open the question of those working for other U.S. government departments and agencies abroad.

The incident heightened tensions between U.S. and Iraqi government officials and contributed to a protracted debate over the extent of immunity that U.S. military personnel and civilian contractors have from Iraqi laws.

Security contractors have had immunity from Iraqi law under a provision put into place in the early days of the U.S.-led occupation of Iraq. But starting next year, under a U.S.-Iraq security agreement that Iraq approved Thursday, Iraq will have the "primary right to exercise jurisdiction" over U.S. contractors and their employees.

The State Department renewed Blackwater's contract this year over strong objections from the Iraqi government.