(CNN) -- A controversial ranking of U.S. cities' crime rates indicates New Orleans, Louisiana, has the worst crime rate, while a New York exurb has the lowest. 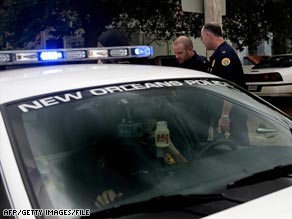 A New Orleans resident talks to police after returning home to find his house had been looted in September.

The CQ Press "City Crime Rankings" list named New Orleans its most crime-ridden city based on a reported 19,000-plus incidences of six major crimes -- including 209 murder cases -- in 2007.

The Gulf Coast city of about 250,000, still grappling with the aftermath of 2005's Hurricane Katrina, was followed in the rankings by Camden, New Jersey; Detroit, Michigan; St. Louis, Missouri; and Oakland, California.

The lowest crime rate was reported in Ramapo, New York, about 40 miles northwest of New York City, with only 688 total crimes and no reported killings in a city of about 113,000. It was followed by Mission Viejo, California, south of Los Angeles; O'Fallon, Missouri, outside St. Louis; Newton, Massachusetts, west of Boston; and Brick Township, on the New Jersey coast.

Previous editions have been criticized by criminologists and the U.S. Conference of Mayors as a misreading of federal crime statistics. The FBI, which compiles its own Uniform Crime Report statistics, warns that ranking cities against each other can produce "simplistic and/or incomplete analyses," and the American Society of Criminology called last year's CQ report "an irresponsible misuse of the data."

The study's publishers said they dropped previous characterizations of "safest" and "most dangerous" from this year's study, calling those qualities "perceptions of the individuals who live in these communities." But they defended the comparisons as a valuable tool for researchers and the public.

"The book provides the means by which individuals can compare local communities to other similar communities based on comparison to the national level of reported crime as well as crime rates per 100,000 of individual types of reported crime, violent and property crime categories, and overall," the company says in a statement accompanying the data.

The CQ report rated 397 cities larger than 75,000 and 356 metropolitan areas, some of which ranked very differently from their core cities alone.