NEW YORK (CNN) -- Authorities in Aruba say they're looking into new evidence that could lead to an arrest 3½ years after Alabama teenager Natalee Holloway disappeared on a senior class trip to the island. 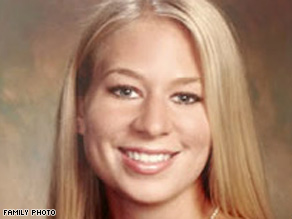 Alabama teenager Natalee Holloway disappeared while on vacation in Aruba with classmates in 2005.

He would not discuss details but said police again consider Dutch student Joran van der Sloot to be the prime suspect in Holloway's disappearance.

A new witness has emerged, authorities say, who can place van der Sloot and his father, Paulus van der Sloot, near a pond on the island at 4 a.m. on the day Holloway vanished.

The witness told authorities he saw a young man, wet from the chest down and wearing only one shoe, running along a road from the pond to a fast-food restaurant.

The witness said he saw the young man and an older man driving slowly down the road in a red Jeep about 10 minutes later. The pond was not among those searched in the early stages of the investigation, Mos said.

A second witness, a former girlfriend of Joran van der Sloot, also told police he made suspicious-sounding comments while they were on the beach. The witness, publicly known only as Celes, told police van der Sloot said: "Who knows? You may now be on the beach with someone who is able to get rid of a corpse."

Watch the latest developments in the case »

In addition, Mos said, two other witnesses have come forward. He declined to discuss those witnesses, other than to say he is hopeful the case can be solved.

"We are hoping to make a decision by the end of this year or early next year as to whether we will re-arrest [the younger] van der Sloot or not," Mos told CNN.

Also key to the investigation, Mos added, is a Dutch journalist Peter De Vries' videotaped interview with van der Sloot. In the interview, van der Sloot acknowledges a friend helped him get rid of her body. Read how van der Sloot "lost no sleep" over Holloway

Mos said he is confident that the tape, which he characterizes as a confession, is admissible in court. With the new tips and new witnesses whose testimony impeaches earlier statements by van der Sloot and his father, Mos said he might have enough evidence to solve the mystery of what happened to Holloway.

The elder van der Sloot has told police he was at home, asleep in bed until 7 a.m. on the night in question. And, Joran van der Sloot has never been able to explain what happened to his tennis shoes, Mos said.

"Well, I really hope it's true, because they even have Joran on tape confessing, and I don't know what could be better than that," he said.

Natalee Holloway, 19, a senior at Mountain Brook High School in suburban Birmingham, Alabama, was a vibrant member of the school band's dance team, "The Dorians," which is similar to the "Rockettes." She was a straight-A student who planned to study pre-medicine at the University of Alabama.

She vanished in May 2005 while on her senior class trip to the island. She was last seen at the popular night club Carlos 'n Charlie's early on the morning her class was due to fly home.

Her disappearance became the subject of a high-profile search and a massive media frenzy. Holloway family members and friends organized volunteer search efforts in Aruba that went on for months.

Early missteps cost investigators valuable time and evidence. Police at first mistakenly arrested two men who had nothing to do with Holloway's disappearance. And, investigators initially ignored information from witnesses pointing to the three young men last seen with Holloway that night.

When Joran van der Sloot and brothers Deepak and Satish Kalpoe were arrested, they told conflicting stories. By that time, verifiable facts were hard to come by.

While they were in jail, police and prosecutors sought corroborating evidence to piece together a motive and theory. They were not successful. Late last year, authorities closed the case without bringing any charges.

"We simply did not yet have the corroborating evidence to take this to trial and win a conviction," prosecutor Mos told CNN. "If we had a body even to determine cause of death, then we could piece some thing together."

In February, the videotape of van der Sloot's taped admission surfaced on Dutch television. De Vries, a famed Dutch journalist, set up a hidden camera capturing van der Sloot talking about Holloway's last moments and how her body was disposed of "like an old rag."

Since then, De Vries has set up another on-camera sting. It aired last week, showing van der Sloot meeting with undercover reporters who posed as Dutch sex industry bosses looking for Thai prostitutes to recruit to the Netherlands as sex slaves.

In the tape, van der Sloot allegedly promises to supply Thai girls for prostitution in Holland and accepts 1,000 Euros as advance payment for his services.

Apparently van der Sloot left the Netherlands late last year and has been living in Thailand for the last few months as a student.

His whereabouts right now are unknown, but Aruban authorities are grateful for the tips that the Dutch documentaries have generated. They hope the tips will bring them closer to a resolution in the disappearance of Natalee Holloway.