Feds near decision on indictments in Blackwater case

WASHINGTON (CNN) -- Justice Department prosecutors are moving closer to seeking indictments for a small number of Blackwater security guards in connection with the deadly shootings of 17 Iraqi civilians in 2007. 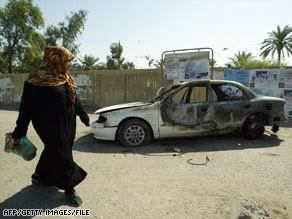 A woman walks past a burned car in September 2007 after an incident involving Blackwater security guards.

Sources close to the investigation say senior officials are weighing proposed grand jury indictments against as few as two to as many as six guards on criminal charges to be determined.

The sources say final decisions would be presented to a federal grand jury at U.S. District Court in Washington.

Iraqi authorities have accused Blackwater guards of killing 17 civilians and wounding nearly 30 in the shootings. But Blackwater has repeatedly said its guards were acting "in response to a hostile threat," a statement repeated by company spokeswoman Anne Tyrrell in August.

The deadly 2007 incident heightened tensions between U.S. and Iraqi government officials and contributed to a protracted, ongoing debate over the extent of immunity that U.S. military personnel and civilian contractors will have from Iraqi laws.

Blackwater and other contractors are exempt from Iraqi law and it remains uncertain whether U.S. laws apply to their actions abroad.

Although indictments may be approved by officials of the Bush administration Justice Department, any trial would be carried out in 2009 by prosecutors under President-elect Barack Obama's Justice Department, which may have a different view of the complex legal issues presented by the case.

All About Blackwater Worldwide • Baghdad • U.S. Department of Justice