WASHINGTON (CNN) -- U.S. police departments are streamlining patrols, reducing training and cutting back on some preventative programs as their budgets fall victim to the struggling economy. 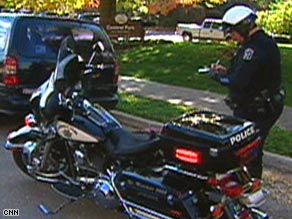 A Naperville, Illinois, police officer cites a motorist at a traffic stop.

Many police chiefs are warning deeper cuts may be coming.

Naperville, Illinois, a middle-class city of about 145,000 people, has a force of 189 officers and 114 civilians. Because of a reduction in real-estate and property tax collections that pay for public safety services, Chief David Dial is cutting nine vacant positions, including three officers, and $60,000 out of his training budget.

"We've gone through the non-personnel related expenses in our budget, and we've cut everything that we possibly can in there," Dial said. "Some of our training monies have been drastically reduced, and there is virtually nowhere else to cut ... except in the personnel area."

The community, which has repeatedly ranked as one of the best places to live in the country, will see the effects, Dial said.

"I think it's going to mean less police visibility ultimately in the community, and we're going to need a lot of community cooperation to keep the crime rate as low as it's been," he said.

Naperville is not unique. A poll of 200 departments during the summer by the Police Executive Research Forum, which studies law enforcement trends, reported 39 percent of respondents said their operating budgets were cut because of the economy and 43 percent said the faltering economy had affected their ability to deliver services.

Among the actions taken by other departments contacted by CNN:

• The Virginia State Police delayed starting a new class of 63 cadets until next April and is leaving open 27 civilian positions.

• Lincoln, Nebraska, is cutting back on services. For example, it will not respond to some medical emergencies and non-injury motorcycle accidents.

Personnel costs represent the bulk of most departments' budgets.

Many jurisdictions, such as Phoenix, Arizona, and Fairfax County, Virginia, have been particularly hit by the foreclosure crisis and the precipitous fall in real estate taxes. Phoenix's Chief Jack Harris says he has cut his budget by 3 percent by delaying purchases and some new programs.

Several of the agencies contacted by CNN said they have not had layoffs, but they have been asked to prepare for the possibility next year -- especially if the economy worsens.

"We have been asked to look at what we would do if we were asked to cut up to 15 percent. And if we do that that will get into sworn personnel," Phoenix's Harris says, referring to officer positions. He said he fears that could mean up to 250 jobs.

The chiefs CNN contacted said they didn't think the cuts have affected public safety, but they predicted that further cuts will. Some agencies may not respond to minor calls, take longer to answer requests for assistance or cut the number of patrols.

David Rohrer, police chief in Fairfax County, has cut anti-gang operations, education initiatives and DUI enforcement -- and has been told to prepare for the possibility of layoffs of about 280 officers.

"I cannot cut officers who serve patrol areas, that answer direct calls for service, that work the streets .... I can't cut detectives who investigate homicides, rapes and robberies," he said.

What is left, Rohrer said, "are all those great programs and the collaborative programs we have done for many years ... education, crime prevention, traffic-safety training...

"All the things we have done in the last 20 years are at risk," he said.

Although the number of major crimes such as murder, burglary and theft have decreased in Naperville in the past year, minor but serious violations such as misdemeanor battery, narcotics and fraud have spiked by about 1,000 cases.

That survey of police agencies says 74 percent of respondents noticed increases in at least one category of property crime this year over the previous one, including burglaries and thefts. Law enforcement authorities don't know if the economy is directly to blame, but suspect it is.

Community group leaders said they are worried about short- and long-term effects.

"I get concerned about the quality of life in the community," Ronald Hume, executive director of NCO Youth and Family Services in Naperville, said. "We're hearing forecasts that it could take into 2010 before the economy starts turning around. ... It does worry me that we're going to have an increase in crime.

"When people are hungry, they need to feed their families somehow," Hume said. "Not all those ways are always legal."

Naperville's Chief Dial says the nation is facing a crisis and fears crime will increase.

"I have been in this business for a long time, and I have experienced cutbacks in the past. Those, however, were done through attrition. I have never experienced the cuts that we are anticipating next year when we anticipate the very real probability of layoffs occurring in our community," he said.