WASHINGTON (CNN) -- The U.S. military will seek the death penalty against Abd al-Rahim al-Nashiri, making him the first person charged in the United States for the attack on the USS Cole, an Air Force general said Monday. 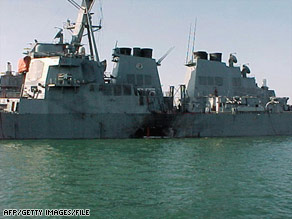 Al-Nashiri "helped plan and organize and direct the attacks" that killed 17 U.S. sailors while the destroyer was in Yemen in October 2000, Air Force Brig. Gen. Thomas Hartmann said.

The top lawyer at the Office of Military Commissions, Susan Crawford, will determine whether the prosecution should go forward and, if so, whether the death penalty should be considered.

Yemen has separately charged suspects in the bombing.

Al-Nashiri, a Saudi Arabian national of Yemeni descent, is being held by the U.S. military at Guantanamo Bay.

Al-Nashiri has said he was tortured into confessing to involvement in the bombing, according to transcripts released by the military. U.S. officials have characterized him as al Qaeda's former operations chief in the Arabian Peninsula.

The CIA has admitted to "waterboarding" al-Nashiri at a secret location in 2002; the tapes of the interrogation were destroyed in 2005.

The U.S. military's summary of evidence against al-Nashiri said an FBI source identified him as an important person in al Qaeda and heard he helped arrange the Cole bombing, according to documents released by the Pentagon in March 2007. Read the military's allegations

On October 12, 2000, two suicide bombers rammed a garbage barge full of explosives into the USS Cole as the Navy destroyer was refueling in Aden, Yemen. In addition to the 17 killed, 47 sailors were injured, according to the U.S. Defense Department.

The blast left a 40-by-40-foot hole in the port side of the Norfolk, Virginia-based guided-missile destroyer, which was carrying a crew of 293.

According to a document released by the government in 2006, al-Nashiri met with Osama bin Laden in Afghanistan in 1998 and received orders to attack an oil tanker off the coast of Yemen.

Later the plot changed to target a U.S. military ship, the government alleges.

Al-Nashiri also was charged Monday in another plot against a French oil tanker in 2002, the same year he was captured. He was held in secret locations until being transferred to Guantanamo Bay in 2006.

During his Combatant Status Review Tribunal at Guantanamo in March 2007, al-Nashiri acknowledged knowing bin Laden and said he had accepted money from him. But bin Laden gave many people money to help them get married or conduct businesses, al-Nashiri said.

Al-Nashiri said he is not a member of al Qaeda, according to the March 2007 documents. He said he knew the perpetrators of the bombing because he had business dealings with them in the fishing industry.

Al Nashiri said he "was tortured into confession, and once he made a confession his captors were happy and they stopped questioning him," according to a statement read during the hearing last year. "Also, the detainee states that he made up stories during the torture in order to get [it] to stop."

Waterboarding involves strapping a person to a surface, covering his or her face with cloth and pouring water on the face to simulate the sensation of drowning. Critics have called it torture.

In February, CIA Director Michael Hayden said al-Nashiri was one of three people on whom the CIA had used the harsh interrogation technique. The other two were Khalid Sheik Mohammed, alleged mastermind of the September 11, 2001, attacks, and al Qaeda operative Abu Zubaydah.

"We used it against these three high-valued detainees because of the circumstances of the time," Hayden said in February. "Very critical of those circumstances was the belief that additional catastrophic attacks against the homeland were imminent."

A civilian lawyer who hopes to represent al-Nashiri said she does not think the legal process is fair.

"The government admitted to waterboarding Mr. al-Nashiri and will be basing its prosecution on evidence obtained through torture," said Nancy Hollander of the John Adams Project, a joint effort of the National Association of Criminal Defense Lawyers and the American Civil Liberties Union.

"It will use this information in a military commission proceeding that provides none of the safeguards that protect from an unjust conviction. These procedures -- and the torture committed by our government -- clearly violate both U.S. law and the moral standards that are the foundation of our country."

Hollander said she has not met al-Nashiri and he has not agreed to let her represent him.

Brig. Gen. Hartmann said Monday the evidence would be examined in court, calling it "the beauty of this system."

The judge "will make a final decision as to the validity of any piece of evidence," he said.

CNN's Terry Frieden and Mike Mount contributed to this report.