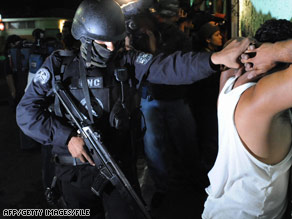 Police arrest a suspected MS-13 member during an April operation targeting the gang in El Salvador.

U.S. Attorney General Michael Mukasey and senior FBI and Salvadoran law enforcement officials were to announce results of the operations at a press conference Tuesday in Charlotte, North Carolina.

Federal law enforcement sources said the arrests stem from a 55-count indictment returned by a grand jury in Charlotte.

Drug and weapons violations are among the charges in the indictment.

MS-13 reportedly is one of the fastest growing and most violent gangs in the United States.

The FBI estimates MS-13 has about 10,000 members in the country, along with tens of thousands in Guatemala, Mexico, Panama, Nicaragua, Honduras and El Salvador, where the gang originated in the late 1980s.

All About Federal Bureau of Investigation • El Salvador