BAGHDAD, Iraq (CNN) -- Iraq has signed its first major oil deal with a foreign company since the fall of Saddam Hussein's regime, a spokesman for the Iraqi Oil Ministry said Saturday. 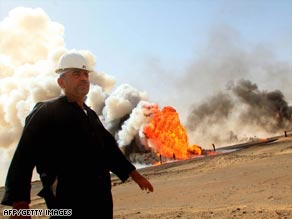 It was the first time in more than 35 years that Iraq has allowed foreign oil companies to do business inside its borders.

The contract with the China National Petroleum Corporation could be worth up to $3 billion. It would allow the CNPC to develop an oil field in southern Iraq's Wasit province for about 20 years, Oil Ministry spokesman Assim Jihad said.

Iraq's Cabinet must still approve the contract, but Jihad said that would happen soon and work could start within a few months.

Once development begins, the field is expected to start producing a preliminary amount of 25,000 barrels of oil a day and an estimated constant daily amount of 125,000 barrels after three years, he said.

Iraq currently produces about 2.5 million barrels a day, 2 million of which are exported daily, Jihad said. That is close to its status before the U.S.-led war that toppled Saddam in 2003, but below its levels prior to the Persian Gulf War in 1991.

Iraqi Oil Minister Hussein Shahrastani said in July that he is confident Iraq will be able to double its production in the next five years.

As it did with other international companies, the Saddam regime had a partnership contract with CNPC signed at the end of the 1990s that entitled the company to share profits. The current contract, however, will be only a "service contract" under which CNPC is simply paid for its services, Jihad said.

He said Iraq has provided "security guarantees" for CNPC, as it would for any other foreign company that will work in Iraq's oil fields.

Jihad called it a major and significant move for Iraq.

Iraq has among the largest oil reserves in the world, with an estimated 115 billion barrels, tying Iran for the No. 2 status behind Saudi Arabia's 264 billion barrels, according to estimates from the Energy Information Administration.