AR: Your grace, welcome to Talk Asia. It's a real honor to have you with us on our program. 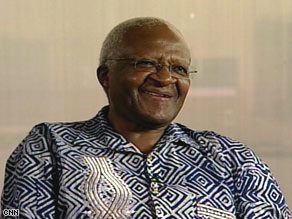 DT: Thank you very much.

AR: Now, as one of the world's leading spiritual figures, you've made your mission to unite people across the board. But do you get the feeling now that the world is actually more divided then it was when you were campaigning against the apartheid?

DT: Now, again you think that, you tend to think that your time is either the best or the worst, and then when you have a sense of history, you'll realize actually, no, there were times things were quite gusty in the world -- we've done quite well, don't you think? I mean, just think, nowadays most people will say they support the advancement of women, woman has been equal, the fact that we're so aware of the gustiness, in a sense, also speaks about the heightening of our own sensitivity.

AR: When you look at the continent of Africa as a whole, it has so many problems still, obviously politically, economically, health-wise with the HIV/AIDS rate, do you ever foresee a time when that continent may become truly stable, truly secure, a haven place?

DT: Sometimes I have to remind Westerners that they ought not to be so hoity-toity, I mean...

AR: Are you calling me hoity-toity?

DT: No, no, no, it's a very tangential way of saying... But yet just look at what happened in Europe: Within a short space of time you had what you called world wars, you had a holocaust, you very recently had ethnic cleansing, you had dictatorships in Spain, in Portugal, in Greece, and all the gulags and awfulnesses that never happened in Russia, but you have been able to come out of that -- and it's taken a heck of a long time, you know? I mean look at the United States, Katrina -- what did Katrina reveal? All the United States, it is a society that is split like to the bottom, that had very poor people in the country that is one of the wealthiest countries.

I am sad when I think of things like what is happening in Zimbabwe, I am deeply saddened by the awfulness in Darfur, in Somalia, in any... You can name them, yes, and yet again you'll see... glimpses of hope, like I mean, Sudan having accepted they all should be a larger peace-keeping force in Darfur, because in the end, actually, freedom is cheaper than repression. When people are free in any country, it's a great deal less unstable -- injustice, repression are fundamentally unstable. Have a look at Pakistan -- you go for the long time, the military had a very, very tough ruler, now, the people have said, we've had enough.

And it may be the same in Burma. I mean, you have a military dictatorship there, and they're scared, running dead scared of a woman, I mean Aung San Suu Kyi. They are scared of her and the fact what matters is she got nothing, except her moral authority, and the people have come out in demonstrations even when they know that they are going to pay a very, very heavy price, and that may be the beginning of the end for the military dictatorship.

AR: You're obviously a very outspoken human-rights advocate. If you lived in this part of the world, if you lived in China, would you take on that campaign as well?

DT: I would hope that wherever I was I would be me. And eh, I have been influenced by some wonderful people who showed me that there is an integral relationship between faith and life at home. And I would say, you see, evil is evil, repression is repression anywhere. And if it is not consistent with what one believes is God's will, then I would hope that one would be able to witness it, and there are wonderful people who do so in very great risks to themselves.

I was just mentioning Burma. I mean the people there are not Christians, they're mostly Buddhists. And yet they stand up, and Aung San Suu Kyi stood up for freedom, for democracy, at very great costs. I mean, she's been under house arrests now for 11 of the last 17 years, fantastic. I mean, she's still there and when they let her out for a little bit, she demonstrates clearly that she has the people eating out of her hand in her gentleness, in her charm, her attractiveness. She speaks about goodness and encourages and inspires people in other parts of the world. And I will say yeah, I would hope I could emulate people like herself.

AR: Your grace, back in 1984 you won the Nobel Peace Prize obviously for your efforts to end apartheid in South Africa. Tell us what that was like for you?

DT: The committee said they were giving it to me really representatively. I was heading up something called the South African Council of Churches. Um, well, nothing could have come at a more crucial moment. For instance, I had been trying to get an invite to see President Reagan and was making little headway. The minute it was announced that I got the Nobel Peace Prize, I didn't have to do anything. I got a call from the White House, to say the president would be very happy to meet me.

So the Nobel Peace Prize opened doors that had previously been closed to us. It helped to raise the profile of our situation because we were not on the radar screen. But the minute I got the Nobel Peace Prize, that raised our profile. People said they have a just, a very just cause. They are working at it nonviolently. And it helped to galvanize more support for us. The other thing was you suddenly became an oracle. The minute you got the Nobel Peace Prize, things that I said yesterday, with nobody paying too much attention, I say the same things after I got it -- oh! It was quite crucial for people, and it helped our morale because apartheid did look invincible. I mean they really seemed to be ensconced in power and immovable.

AR: Didn't you ever lose hope at times?

DT: No, I didn't lose hope. I believed that this was God's will and God was in charge, though there were times when I wished to whisper in God's ear: "God, we know you are in charge, but why don't you make it slightly more obvious?"

AR: I guess other than winning the Nobel Peace Prize, another standout moment for you must have been the first free democratic elections in South Africa. Just what are your recollections of that?

DT: Oh, 1994, April 27. There won't be a day like that ever again. I mean, the sky was blue, with a blueness that had never been there before. At least that is what it seemed to be for us. And I said to people, it's very difficult to describe what it must mean for us to have voted for the first... I was 63 years of age when I voted for the very, very first time in the land of my birth. And I said to people, well, it's like falling in love. How do you describe that to someone who hasn't had the experience? How do you describe a rose to someone who is blind? It was a day like no other day, it was a magical day. It... You've probably seen images of the long, long, long, long lines of South Africans who were waiting patiently, many patience, actually began to say, "Well you know, I waited two hours," and someone says, "You waited only two hours? I waited for three hours!"

But what is even more fantastic was that for the very first time, you saw people of all races standing in those lines. And relating to one another. People, a white couple here would share their sandwiches with a black couple. And you said, somebody up there really was smiling on us, because another thing was that it was one of the most vulnerable moments in our country. I voted in one place and then drove around just to see what was happening. And I was scared stiff, because you have taken just a few crazies with AK-47s and they would've showed the most awful mayhem... It didn't happen. It was like a miracle.

AR: What's your take on the direction of South Africa at the moment?

DT: I usually describe it this way: I say, things could be a great deal better, but I'm quite clear things could be a great deal worse. You know, we, given our antecedence, given where we come from, it is amazing the level of stability we have. And we have a very high crime rate, we have poverty that is dehumanizing in many places. You'll see shacks cheek by jaw with some of the most splendid mansions. The gap between the rich and the poor is widening. Whereas previously it was that almost all of the opulent were white, there are some blacks now who are stinking rich.

And when you think of the fact that we could have prevented many of the deaths that have happened as a result of the HIV/AIDS pandemic, you are just shattered. But you have to say, it still is an extraordinary place. I mean it hums, hums, hums. But we are also a beacon of hope. You know, many countries which have had conflict have looked to South Africa to say, well, they've provided a paradigm with their truth and reconciliation commission.

AR: Tell me something. What are the principles that have guided you throughout your life?

DT: I don't know whether they've guided me throughout my life, but it's that now I'm even more convinced of the fact that human beings are precious. And every human being is precious. That human beings are fundamentally good, despite all of the things that seem to point to the contrary, we have at home something called -- it's very difficult to translate it to English -- "Uuntu." Uuntu says you and I are made for togetherness. Uuntu: A person is the person through other persons. That we are made to live in a delicate web of interconnectedness. That I need you in order for me to be human, as you need me. I have gifts which you do not have, and you have gifts which I do not have, and God says "Voilà! That's exactly why I did that, so that none can ever be self-sufficient totally."

There's no way, you see, there's no way in which you can ever win a war against terror. As long as there are conditions in many parts of the world that make people desperate: poverty, disease, ignorance, etc. etc. We will discover, I hope soon, that we can survive, only together. We can prosper only together. And I think people are beginning to realize this, that you can't have pockets of prosperity in one part of the world and huge deserts of poverty and deprivation and think you can have a stable, secure world.

AR: Your grace, thank you so much indeed for your time today. We really appreciate it. Many thanks indeed.