Canadian firetruck responding to U.S. call held up at border

(CNN) -- A Canadian firetruck responding with lights and sirens to a weekend fire in Rouses Point, New York, was stopped at the U.S. border for about eight minutes, U.S. border officials said Tuesday. 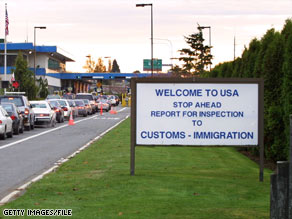 Fire officials battling the blaze called for help from fire departments in nearby Quebec, using a longstanding and often-used mutual aid agreement. But the first truck that arrived at the small Rouses Point border crossing was delayed as officials checked documentation of the firefighters and their truck, officials confirmed.

Two other trucks that arrived at the crossing next were cleared in less than two minutes each, a time that one fire official said was still too long considering the situation.

"It's embarrassing," said Chris Trombley, chief of the Champlain [New York] Volunteer Fire Department and deputy fire coordinator for Clinton County Emergency Services. "We're calling for help from another country and the first roadblock they hit is at our border."

The Canadian firefighters "were asked for IDs," Trombley said. "I believe they even ran the license plate on the truck to make sure it was legal."

In the past, firetrucks on emergency calls cleared border checkpoints in 30 seconds or less, Trombley said, although he said identification is sometimes checked upon their return.

A U.S. Customs and Border Protection official said the eight-minute delay at the Rouses Point crossing was caused "when one of the firefighters' admissibility was brought into question." He declined to elaborate, citing immigration and privacy laws.

A government source familiar with the case said one firefighter had a criminal record, raising questions about whether he could enter the United States.

Kevin Corsaro of the border protection's Buffalo field office said the agency's primary responsibility is to protect the homeland. He called the event an "isolated incident" and said agency officials were meeting with local fire officials to "develop a plan to prevent the possibility of any delays."

No one was seriously injured in the fire, but The Anchorage Inn restaurant -- a landmark in the village of Rouses Point -- was destroyed. A firefighter who suffered minor smoke inhalation was treated at the scene, said Michael LeBlanc, chief of the Rouses Point Volunteer Fire Department. The cause of the blaze has not been determined, he said.

"Would it [quicker passage at the border] have changed the outcome of the fire?" Trombley asked. "Would the building have been burned? Of course it would." But he said firefighters were getting fatigued fighting the fire and relief was delayed. "Just the fact that it could happen and it could happen again is what has us worried," he said.

Clinton County has mutual aid agreements with fire departments in Vermont and Quebec, Trombley said, and the county requests help from Quebec fire departments about 30 times a year. It sends help to Canada a similar number of times, he said.

Trombley and LeBlanc said they planned to meet with authorities on Wednesday to discuss the incident. LeBlanc declined to comment. "I don't have all the facts and I don't want to mistake what happened," he said.

"We've had a mutual aid system in place since the '50s and I can't remember anything like this happening," said Trombley. E-mail to a friend

All About Canada • U.S. Customs and Border Protection • Fires