Thais are sensualists when it comes to their cuisine. Food in Thailand is far more sophisticated, diverse and colorful than it gets credit for in the U.S. People forget that Thailand is made up of hundreds of ethnic groups, languages, and four distinct regions. In fact, food is taken so seriously in Thailand that Kings have written cookbooks. Thais like to drink almost as much as they like to eat. You'll rarely have one without the other.

Drunken noodles with no noodles?
1:30
Tony on his chili-laden Thai dish "It's like an ice cream headache, but it's like a pepper headache." See Sun. at 9pE/P

Shut up and eat

A frequent comment on food websites is that I should avoid discussion of politics or social conditions and concentrate on the food. My host, serving me a humble but tasty Lao-style laarb could be missing three out of four of his limbs, but God forbid I ask the question: "Hey there, fella ... what happened to your arm and legs?" The answer might intrude on someone's vicarious eating experience.

In the Democratic Republic of Congo, the bucket of water used to boil my pounded cassava might well have been transported the two miles from the nearest river on top of a small child's head. Some very unpleasant militias have been known to interrupt such journeys. This, it would seem, is also worth mentioning.

There is, of course, nothing more political than food. Food itself. Who's got it, who doesn't? "What's" cooking is usually the end of a long, often violent story.

That can be a bummer for some who'd rather be fondling themselves while perusing recipes for Bundt cake than thinking about what Burroughs called the "frozen moment when everyone sees what is on the end of every fork."

So there should be much rejoicing in Chowland that this Sunday's episode of "Anthony Bourdain Parts Unknown" is "all about the food." Ironically enough, it takes place in one of the most politicized environments on earth: Thailand., where, it seems, every time we go, there are civil actions, military coups, changes of government. I'd like to say that the politics of Thailand are just too complicated, too fast changing, too impenetrable for me to ever understand much less explain, hence my focus on food and drink. I'd like to say it was because the latest military takeover happened after we were there -- rather than just before -- or during. But that wouldn't be true.

Fact is, I chose to focus on eating — and specifically drinking in Northern Thailand around Chiang Mai -- simply because I was fortunate enough to go there with a uniquely qualified guide: Chef Andy Ricker of Portland and New York's "Pok Pok" restaurants. He may be a farang -- a slang term for foreigner -- but he's been moving back and forth between Thailand and America for 20 years or more and ... well ... just eat his food sometime and you'll know what I'm talking about.

Basically, it's an entire hour of prolonged bender, an increasingly addled tuk-tuk ride from place to place shoving delicious things into my face, washed down with (variously) Thai "whiskey," moonshine and beer. Naturally, things ended badly.

Have you ever been spanked by a supermodel? Carefully but aggressively tortured with nipple clamps, riding crop and handfuls of crushed ice by a statuesque beauty in skin-tight vinyl? Me neither. I frankly don't care if it's my pick of the Victoria's Secret catalog coming my way with a paddle, I'm not interested. I don't care in what context, I don't like pain. I don't even like minor discomfort.

Except when we are talking food, where the older I get, the spicier and more painful I want it. It's one of the things that hooked me earliest and most irrevocably about Southeast Asia: the spices, the chills, the funky, mouth-searing sauces and dips. 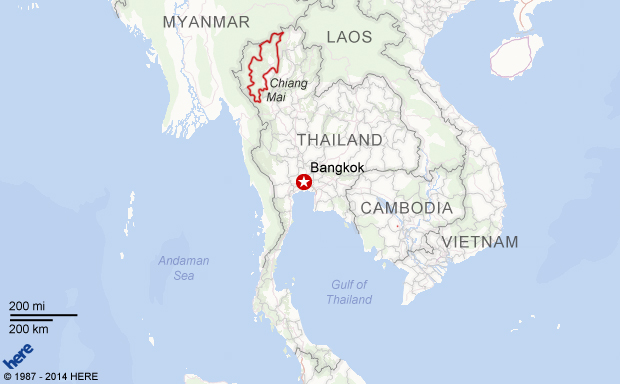 Any idiot, of course, can dump enough cayenne or hot sauce into a bowl of ground beef and ignite your head.

But it takes a master to build the deeply pleasurable slow boil you find in some Thai dishes: the delicate interplay between sweet and sour and spicy, the gradual buildup of pleasure/pain to the point that you feel your vision starting to get weird. Numerous times during my most recent trip, I'd be halfway through a delicious table top full of food and feel my eyesight closing down: first getting fuzzy around the edges of the frame like a Vaseline-smeared lens, Andy starting to look like Barbara Walters on "The View" -- then, gradually, closing down to full-on tunnel vision, tongue burning on all sides, lips inflamed, back of neck and forehead beaded with sweat -- an otherworldly sense of elation coming over me as my brain became flooded with endorphins.

I offer this -- an overdose of endorphins, leading to a false sense of well-being and the presence of what was probably more alcohol than advisable -- as a mitigating factor in the how and why I ended up kissing Ernest Borgnine on the lips. He was apparently wearing a clingy cocktail dress at the time.

Northern Thailand, by the way, offers some of the best reasons why, when traveling at least, a vegan might consider suspending their restrictions. Because to experience the place without trying the splendiferous variety of pork products would be sad enough. To ignore the end result of a heavily protein-based cuisine shaped, over centuries by influences Lao, Chinese, Burmese and Indian, would be a missed opportunity. To avoid the deep, ubiquitous, mysterious funk of the local shrimp pastes would be to turn one's back on the totality of human endeavor.

I say this without malice.

To be fortunate enough to be able to visit Thailand, to eat in Thailand, is a deep dive into a rich, many textured, very old culture containing flavors and colors that go far beyond the familiar spectrum. Given our limited time on this earth, and the sheer magnificence, the near limitless variety of sensory experiences readily available, you don't want to miss ANY of it.❚

"In this part of the world you live and die by the harvest," Anthony Bourdain says of Chiang Mai province's fertile fields and sticky-rice-filled tables.