Jefferson: The face of the modern gun debate

How the third president is our Rorschach test on guns 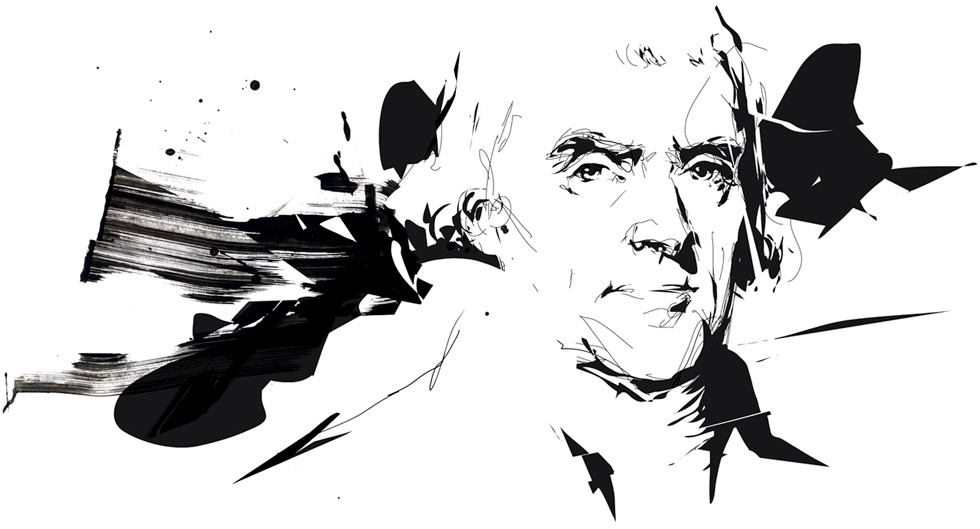 (CNN) -- Thomas Jefferson may not have penned the Second Amendment, but the paradoxical Founding Father comes galloping into the present whenever there's a gun debate. Quotes attributed to him and tied to the right to bear arms litter the social sphere. But how did a man 200-plus years past his prime become today's gun-debate darling?

"Jefferson becomes this great political Rorschach in which people pour into him different things," says Saul Cornell, a professor at Fordham University who studies early American political and constitutional thought.

People read into the inkblots of antiquity, molding Jefferson into who they want him to be on the subject of guns.

"Basically, what the Internet has done is democratized or Starbucks-ified discussions of the Founding Fathers. Everyone can talk about them without actually knowing anything about them," Cornell says.

It's the Wikipedification of knowledge, and it doesn't matter if it's true.

Real or fake, the Internet has spoken; it's loudest after tragedies like Aurora and Newtown. Read these Jeffersonian quotes fueling the debate. What do they say to you?

What he didn't say

"The strongest reason for the people to retain the right to keep and bear arms is, as a last resort, to protect themselves against tyranny in government."

Jefferson was no fan of tyranny, but he wasn't the author of this famous quote about it, according to Monticello.org. Thanks a lot, Internet!

Jefferson had bigger issues to deal with than guns: fears like banks and an elite group controlling a vast amount of wealth. Sound familiar?

"There are definitely ways you can make Jefferson be a spokesman for Occupy Wall Street or the NRA, but to do so is to take him out of his own time and put him into a debate that is quite alien in his time," Cornell says.

Thea Patriot, commenting on CNN "The strongest reason for the people to retain the right to keep and bear arms is, as a last resort, to protect themselves against tyranny in government." Thomas Jefferson

"Laws that forbid the carrying of arms ... only disarm those who are neither inclined nor determined to commit crimes. Such laws make things worse for the assaulted and better for the assailants; they serve rather to encourage than prevent homicides, for an unarmed man may be attacked with greater confidence than an armed one."

Pause when you see photo memes of Jefferson saying "no" to gun control. Truth is, he wasn't the one who said this first.

For the gun rights advocates who love this line, the good news is that Jefferson did quote it from someone else. The Thomas Jefferson Foundation's website, Monticello.org, has an entire section featuring "spurious" quotations attributed to Jefferson, including this one. It's a passage from Italian philosopher Cesare Beccaria's "Essay on Crimes and Punishments."

In the 18th century, before people tweeted everything, "people had notebooks where they wrote down anything they thought was important," explains Cornell. Jefferson was just quoting Beccaria.

Jefferson agreed that keeping guns out of people's hands only helped the bad guys, according to Cornell in his book "A Well-Regulated Militia."

But the phrase takes on different meaning when translated from the Italian, according to an article by Washington University law professor David Thomas Konig. Jefferson wasn't questioning the constitutionality of anti-carrying laws; he said they were impractical to uphold.

In the meantime, let's get these gun laws settled right quick. This quote by Thomas Jefferson is the best. #Seriously pic.twitter.com/PLL6OqAOaJ

"The beauty of the Second Amendment is that it will not be needed until they try to take it."

Does this sound like something Jefferson would say? Not even close, according to scholars.

"I can't even imagine Jefferson writing something like that," Cornell says. "That's such a modern turn of phrase."

Monticello.org found no reference to this sentence in Jefferson's writings; it traced this misattributed quote to a book published in 2007.

haereticum, on Tumblr "The beauty of the Second Amendment is that it will not be needed until they try to take it."

Grab your gun and show 'em who's boss! Maybe that's not quite it, but the quote does sound like a call to action, at least to gun-rights advocates.

But the tone is all wrong for Jefferson. It's too hasty; the revolutionaries did everything they could to avoid a revolution. When Jefferson wrote the Declaration of Independence, it wasn't a split-second decision. He and his co-authors drafted it as a "last resort," Cornell says.

"Jefferson is definitely someone that, when there is injustice, there is a whole range of constitutional and legal steps that you must implement," he says. "This right of revolution is a very distant, final, emergency option."

Living with no representation, the colonists had no say over the laws that governed them and no right to free trial, Cornell explains. They faced injustice, but they didn't feel they had the right to start a revolution until there were no other alternatives.

"No freeman shall be debarred the use of arms."

Jefferson wrote variations of this sentence in three drafts of the Virginia Constitution, but this line never made it into the adopted Constitution, according to Monticello.org. This quote is often coupled with one he never said, the one about protecting yourself from tyranny.

Hey Gun Control NUTS: "No freeman shall be debarred the use of arms."...Thomas Jefferson

"... One loves to possess arms, tho they hope never to have occasion for them."

Jefferson wrote this phrase in a letter to George Washington on June 19, 1796. Typically, gun-rights advocates use the quote as an argument in their favor. The oft-repeated phrase wasn't part of a grand gun manifesto, though; it's one line in a long plea to get a document back.

"He was asking Washington to return to him a document on a diplomatic matter," Konig writes. The document was a note written by co-Founding Father Alexander Hamilton and Henry Knox, the nation's first secretary of war.

"One loves to possess arms, though they hope never to have occasion for them." - Thomas Jefferson ...KEEP the gun! pic.twitter.com/SgI8m56q

"Let your gun therefore be your constant companion of your walks."

Jefferson considered carrying a gun with him a great form of exercise, which he wrote in a 1785 letter to his 15-year-old nephew, Peter Carr. Just before this quote in the letter, he explains why: "While this gives a moderate exercise to the body, it gives boldness, enterprize, and independance to the mind." (And, yes, those are Jefferson's spellings.)

As for why he would suggest bringing a gun on a walk, Cornell says Jefferson probably wasn't worried about crime. "His worry is most definitely about slave rebellion."

Ah another touchy topic for our contradictory third prez, who, in theory, wanted to free slaves, just not his own.

Let your gun, therefore, be the constant companion to your walks. Thomas Jefferson #guncontrol

"It may be proved that no society can make a perpetual constitution, or even a perpetual law. The earth belongs always to the living generation. ... Every constitution, and every law, naturally expires at the end of 19 years."

Jefferson wrote this in a letter to James Madison in 1789, which kicked off a two-year correspondence about the Bill of Rights, according to the Constitutional Law Foundation. But what did he mean?

Translation: Legislation shouldn't last forever. Jefferson asserts that it should be the current society making laws – not the previous generation.

fcarlstrom.tumblr.com Jefferson has been dead for 186 years, and still he manages to have a more modern view on this issue than many people in this country, and far bigger balls than our current leaders.

What do you say?

No one will ever really know how Jefferson would have felt about gun control in today's world, but he left us a clue: He accepted that times change, and so should laws. Infer what you will.

The words of the prolific writer still echo through our gun conversations, but maybe the echoes are just that: whispers of the past.

This occasional series examines our darlings of the Interwebs, people the online world has chosen to represent the issues of our times, from the gun debate to the immigration argument to the fight over gay rights. True or false, like it or not, Internet zeitgeist shapes our views and conversation.