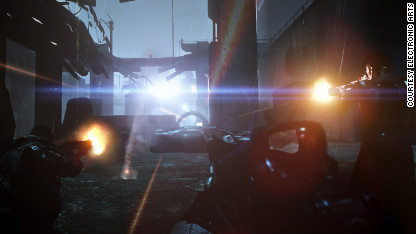 "Syndicate" tries to remake a '90s title into a modern-day, first-person shooter and as far as gameplay mechanics go, it succeeds. But, visually, the game falls so short that it ends up being far from an enjoyable experience.
FULL STORY

"Twisted Metal" introduces a new generation of gamers to the mechanical mayhem of the smash-'em-up series' previous games, while actually adding in a little bit of a story to tie all the action together.

You love your Apple iPod and for good reason: It's easy to navigate through your extensive music collection; subscribing to free podcasts is a breeze thanks to Apple's intuitive iTunes Store; and there are thousands of fun accessories designed to give your iPod additional functionality.

"Culpa Innata," an adventure game for the PC from Strategy First, is set on a unified Earth in the middle of the 21st century. It's no secret that the once-thriving PC adventure genre -- with such celebrated titles as "King's Quest," "Myst," "Grim Fandango" and "The Longest Journey" -- is one of the least popular game types today.

Traveling over the holidays? A portable gaming system can help keep you entertained while waiting for a flight, riding on a train or passing time in the back seat of the family minivan.

By the time Nathan Drake -- the smooth-talking, treasure-hunting descendant of famed privateer Sir Francis Drake -- arrives on a teeny island in the middle of the Pacific, you will agree that the Sony PlayStation 3 has a much-needed holiday hit on its hands.

"Rock Band," the eagerly anticipated music game, lets you live out your childhood dream -- virtually -- as you play guitar, bass and drums and sing your way to stardom.

The good -- and bad -- news for "Guitar Hero" fans is that in the latest game in the franchise, RedOctane didn't mess much with the formula that placed its predecessors among the hottest game sensations of our time.

If you ever doubted a video game could deliver a movie-like experience, pick up Ubisoft's "Assassin's Creed" for an adventure so engrossing it should've come with a crowbar to pry yourself away.

"The Simpsons Game's" most notable trait is that it's funny, so funny that I can't believe how often I actually laughed out loud at the wonderfully produced cutscenes that have been made for the game, despite how weird it is seeing Simpsons animation in HD.

"Halo 3" might be all the rage these days among first-person shooter fans, but those looking for the most bang for their buck won't find a better deal than the action-packed "Orange Box" from Valve Software.

If you launch the latest Spider-Man video game expecting a comic book-inspired brawler for younger players, you won't be disappointed with this superhero adventure.

Skateboarding is all about cheeky defiance, which is exactly what Electronic Arts is sporting for going up against Activision's billion-dollar Tony Hawk skateboarding franchise.

"Go! Go! Go!" is one of the first things you will hear after launching "Medal of Honor Airborne," as you follow your fellow soldiers toward the open door of a C-47 aircraft and parachute into hostile territory.

Not only is Microsoft Game Studios' "Halo 3" the most eagerly anticipated video game of the year -- it achieved a milestone of a million preorders two months ago -- but this action sci-fi series has become a cultural phenomenon, spawning novels, comics, action figures and a top-secret project with Academy Award-winning director Peter Jackson ("The Lord of the Rings. The Return of the King").

"Lair" is a beautiful fantasy-action game with a good story and extraordinary music.

Sports video games are like birthdays: You more or less know what to expect when they roll around each year, but some are simply better than others.

While the trend today is portable games that can make you smarter -- spawned by the popularity of Nintendo's "Brain Age" titles -- some are designed to turn you into a jackass.

Microsoft Xbox 360 owners in search of an intense 3-D shooter need not wait for Halo 3.

Thanks to its unique motion-sensing controllers, the Nintendo Wii has enjoyed critical and commercial success by offering fresh new game-play experiences.

Until recently, wannabe rock stars were limited in how to live out the dream: embarrass themselves at karaoke bars or dance in front of the mirror with a tennis racket.

NASCAR enthusiasts and Formula 1 fans might turn their nose up at off-road and Rally racing, but they should reserve judgment until they've climbed behind the wheel of Codemasters' "DiRT."

So many games, so little time.

Movie-based video games are a lot like movie sequels: You hope for the best but brace for the worst.

There's a new "Season 1" DVD causing quite a buzz among entertainment fans -- and it's not Heroes, Supernatural or any other television show.

Good news for those tight on cash or with aging PCs: Many video game retailers still devote a section of their store to "bargain bin" games, those slightly older, undersold or overstocked titles.