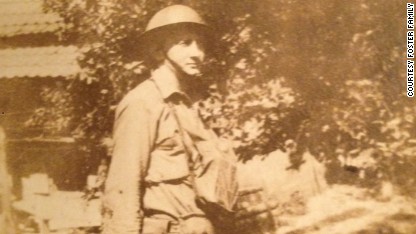 In 1917, at age 24, Leo Foster went from being a musician to an instrument of war.
FULL STORY 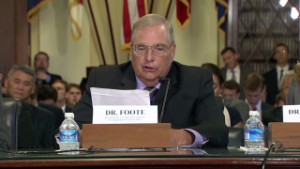 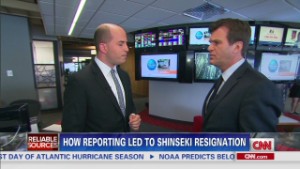 Travis Mills has no arms or legs. He is an American hero who served three tours in Afghanistan and lost all his limbs when a bomb exploded under him.

It's become a familiar pattern in Washington.

Some veterans injured in combat in Iraq and Afghanistan are being made to wait for months in the Phoenix Veterans Affairs Health Care System despite a national mandate they be given priority access to medical care, a VA doctor told CNN.

An audit team sent to the Malcom Randall VA Medical Center in Gainesville, Florida, discovered a list of patients needing follow-up appointments that was kept on paper instead of in the VA's electronic computer system.

Under fire after veterans died waiting for appointments at VA hospitals, Veteran Affairs Secretary Eric Shinseki will say Thursday that he is "angered and saddened" but won't be providing much detail about how his department is correcting the problems, according to prepared congressional testimony obtained by CNN.

Two Durham VA Medical Center employees have been put on administrative leave because of "inappropriate scheduling practices," the Department of Veteran Affairs said in a Monday statement.

The nation's largest veteran organization, The American Legion, and one other veterans group, Concerned Veterans for America, on Monday called for the resignation of Veterans Affairs Secretary Eric K. Shinseki.

The director of the Phoenix Veterans Affairs Health Care system and two others have been placed on administrative leave amid claims of a secret waiting list and claims that 40-plus veterans died waiting for care.

The top officials at the Phoenix VA denied any existence of a secret waiting list in an in-depth interview with CNN on Tuesday, and they denied that delays in care caused the deaths of U.S. veterans at the facility.

At least 40 U.S. veterans died waiting for appointments at the Phoenix Veterans Affairs Health Care system, many of whom were placed on a secret waiting list.

The director of the VA hospital in Augusta, Georgia, has publicly apologized for the deaths of three veterans at the facility that were caused by delays in care.

Military veterans are dying needlessly because of long waits and delayed care at U.S. veterans hospitals, a CNN investigation has found.

Suddenly, Patrick Caruso's days as a Marine were done.

Mixed in with costume jewelry and trinkets was a gold and purple heart-shaped medal bearing the image of George Washington.

Veterans share one thing they want you to know about military serviceupdated Fri Nov 08 2013 08:22:22

Life in the military "damn sure isn't how Hollywood portrays it," says retired Master Sgt. Mike Butler, who served in the Army for 21 years. So what is it like?

November has recently transformed into "Movember," the month for growing mustaches to raise money for fighting prostate cancer. Now, for those who aren't interested in the shaggy look -- or who might be "follicly" challenged -- there's another way to help another good cause: by cutting your locks.

Simple tasks like going to the store were impossible for former Army Spc. Karl Fleming, whose anxiety and post-traumatic stress disorder kept him inside -- until he got Kuchar earlier this year.

The recent 16-day government shutdown hit many Americans hard. But few groups were hit harder than our troops and veterans.

Thirty years ago, a Hezbollah suicide bomber drove a truck into the U.S. military barracks in Beirut, Lebanon, killing 220 Marines, 18 sailors and three soldiers. It was the deadliest attack on U.S. Marines since World War II.

Cpl. Michael Boucher will never forget June 12, 2011. He was on his second deployment with the Marines in Afghanistan. Another squad had been hit by two improvised explosive devices, and he was helping to clear the landing zone so a helicopter could pick up the casualties.

No checks? No worries.

Nearly a hundred veterans from several dozen military coalitions converged at the National World War II Memorial in Washington on Tuesday to protest the partial shutdown of the government that they say could put more than 5.5 million service members at risk of not receiving their monthly benefits by November 1.

A shaky video captured only a few moments of William D. Swenson's actions during a brutal, hours-long battle in Afghanistan: Kissing a badly wounded comrade on the forehead as he helped load the soldier into a helicopter.

Born in Brooklyn, Zachary Fisher got into the construction business at age 16. And he kept on building -- not just a business, but a reputation as one of America's most generous donors to troops and veterans.

Push yourself. Cherish family. Vote. On this Veterans Day, CNN iReporters share the most important lessons they've learned from vets in their lives.

The slick, black aircraft came roaring down the runway on its way into the sky. We had been allowed to watch the takeoff from an elevated viewing area about three-quarters of the way down the strip. There were the five of us attached to the USO's Operation Thriller III tour: writers Kathleen Antrim, Joe Finder, Andy Harp, Brad Meltzer and me.

Carol Malone never knew her father. She was born in 1942, and her father, U.S. Army Sgt. Victor J. Hubany, was killed in 1944, before he'd been home from war to meet his little girl. She used to watch hours of World War II footage, looking for a glimpse of him.

A smiling likeness of legendary soul singer Otis Redding greets visitors to the city clerk's office in this central Georgia city. Down the hall, inside the mayor's office, is a portrait of another Macon legend: Rodney M. Davis.

Celebrated on November 11 every year, Veterans Day honors men and women who have served in the U.S. armed forces. The date marks the anniversary of the end of World War I -- which ended on the 11th hour, of the 11th day, of the 11th month of 1918.

For four years, Yvonne Morris worked at Missile Site 571-7. Literally, it was a real hell hole.

Inside a trailer in Honaker, Virginia, is a 5-year-old girl who loves lemon-lime slush. She sleeps in a room with a quilted bedspread and matching purple curtains. She adores her cat Tiger, dogs Smoky and Rusty and a black, pop-eyed goldfish.

George Smith, one of the Navajo code talkers who helped the U.S. military outfox the Japanese during World War II by sending messages in their obscure language, has died, the president of the Navajo Nation said.

With the presidential race heading into its final stretch, both candidates vow to protect the sacred promises made to military families. But neither is offering any details on how they might support military families if we hit a fiscal cliff with budget cuts that could wipe out services for military and veterans' families.

Mike Rioux can't go to the grocery store without making a list, even for a single item.

Childhood obesity isn't just a health issue, according to a group of retired military leaders. It's also a national security issue.

While serving on an assignment in Afghanistan on October 23, 2010, Marine Cpl. Juan Dominguez landed on a buried bomb after slipping down an embankment and lost both of his legs and his right arm in an explosion.

On August 5, when a gunman drove to a Sikh temple outside Milwaukee and started shooting his 9mm handgun, some ran and some leapt to stop him.

The United States has pitched in for the first time to clean up part of the toxic legacy left by the millions of gallons of the chemical compound codenamed Agent Orange that it dumped on Vietnam during the war there in the 1960s and '70s.

California authorities are taking a controversial veterans' charity to court, accusing it of paying officers "excessive" salaries and making "imprudent" loans, totaling hundreds of thousands of dollars, to a leading conservative activist's company.

Facing an aging rail industry workforce and an influx of returning military veterans, the U.S. Department of Transportation announced Tuesday an initiative in which the growing rail sector will hire more than 5,000 veterans this year, matching the same number hired in 2011.

Moments after the explosion, as he lay in a canal in rural Afghanistan, Cpl. Todd Nicely screamed twice at the top of his lungs. He was hurt so badly, his right leg blown away, his left one barely hanging on, but then he thought of two things.

The same dementia-like disease found in the brain tissue of several National Football League players has shown up in the brains of four U.S. veterans exposed to improvised explosive devices and other head trauma, according to new research.

"When I got out of the Army, I did not want to talk about my war experience," said Angela Kozak, currently a speech pathology student at San Diego State University.

When Al Charette traveled to the North Pole, he went under it.

It has been more than 65 years, but for 93-year-old Anthony Snetro, the image of a Japanese torpedo bomber closing in on him will never go away.

The Oka boys are a true band of brothers. All seven served in the military, yet they fought on opposing sides.

Nearly seven decades after the attack on Pearl Harbor, thousands of Japanese-American World War II veterans were honored Wednesday at a Congressional Gold Medal ceremony held at the U.S Capitol.

Out of sheer boredom, Susumu Ito, in World War II, became a forward artillery observer, one of the most dangerous jobs available.