A little girl's memories stir questions about good and evil

Terror in a small town
First of four chapters: The Nichols family endured years of terror in the 1970s.

Editor's note: This is the first chapter in a four-part series releasing on CNN.com.

Sellerstown, North Carolina (CNN) -- Around here, it's known simply as The Book.

People buy two or three copies at a time. Churches use it in Sunday school. And in many homes, it sits beside the Bible, also known as "The Book."

In these rural flatlands where faith is rooted like the tobacco fields all around, many had forgotten about the campaign of terror against a beloved preacher and his family more than 30 years ago. Then The Book hit the stands.

That little girl who saw her momma get killed, whose home was bombed over and over before the hail of bullets -- they remember her. She was the brave 8-year-old who testified against the killer. She's grown up now, living in suburban Nashville, and the author of The Book.

The actual title of Rebecca Nichols' memoir is "The Devil in Pew Number Seven." It describes the six-year campaign against her father, a preacher in this community of just a few dozen souls.

The man who killed her mother remains in the area, down a road where farm animals outnumber residents. He earns only a few pages in Rebecca's book. Her focus -- the "devil" in her title -- is the man who orchestrated the terror: Horry James Watts, the rich and powerful former Columbus County commission chairman.

Many people in the county didn't fully know the extent of Watts' involvement until The Book laid it out, says Ann White, who works in nearby Whiteville at the main library, where copies don't stay on the shelf for long. White speaks in a whisper, as librarians tend to do. But she's not just being mindful of her patrons. The Book has everyone stirred up.

"You can't believe it," she says. "His obituary read like he was the king of the throne, like he'd never done anything wrong. Then, this comes along."

Watts died 13 years after the killing, at 85. His obit lists his accomplishments: chairman of the county's board of commissioners, member of the Whiteville City school board, owner of Farmers Oil & Fertilizer. It makes no mention of his trial on federal charges for conspiring to bomb the parsonage and church or the prison sentence he served after entering a no contest plea in the midst of his trial.

Clara Cartrette was there that day. A reporter for the semi-weekly paper in Whiteville, she covered Watts' trial -- and the killer's, too. She's been the eyes and ears of Columbus County for the past 50 years. Still, The Book surprised her. In the newspaper's office, just around the corner from the library, she searches large leather-bound books containing yellowed copies of The News Reporter.

She's a bundle of energy, the South's real-life version of Angela Lansbury's character in "Murder, She Wrote." She says she graduated from UHK, "the University of Hard Knocks," and kicked down doors in a male-dominated newsroom to become the crime reporter "because I was bored."

She flips through a book of newspapers from the 1970s and spies the headline she's looking for.

"We have learned much about the people of Sellerstown during the five years and one month we have lived among them. First of all, we know there are good and bad, rich and poor, intelligent and ignorant people in every corner of the earth. ..."

It's a voice from the grave, the words of Rebecca's mother, Ramona Nichols.

"There have been anxious moments here at the Free Welcome Church."

She had come into the newsroom to deliver a letter to the editor; the paper ran it on the front page. In it, the preacher's wife, whose family had already endured two years of death threats and harassment, said her family would stick with their flock no matter what.

Cartrette peers up from her reading glasses and closes the bound volume of newspapers.

She has seen a lot in her years of covering crime, even in this out-of-the-way place. She remembers getting physically sick after witnessing the discovery of an 8-pound baby in a landfill.

But nothing ever compared with what happened out there on Sellerstown Road -- to the preacher, his wife and their two young children. How could they be the target of such loathing?

"It's stranger than anything Stephen King could write."

Rebecca Nichols is 41 now. She flashes a radiant smile even while speaking about the horror her family endured. Her deep brown eyes sparkle. She shows off her mother's wedding ring -- a treasure, she calls it.

She's gracious, well-mannered and betrays few emotions. It's as though she poured them all into her book. Rebecca Nichols holds the last picture she has of her and her brother with her parents.

I first met Rebecca a year ago, after writing a story about a man who survived his family's massacre. She told me she had a similar tale to share.

It began with death threats over the phone, she said, then letters and drive-by shootings. The church and parsonage were bombed -- 10 times to be precise.

The terror stretched on for more than six years.

Neither local nor state nor federal lawmen were able to stop the assaults. It ended in the parsonage, three days before Easter in 1978, as the family sat down to dinner.

To write her book, Rebecca told me, she returned to Sellerstown, to the church and home where her life was blown apart. What Rebecca experienced could so easily have turned her bitter and broken. Yet she spoke not of hate and animosity but of love and forgiveness.

As we talked, I couldn't help but wonder what had become of others who lived through the ordeal: the parishioners who lost their pastor, the federal agent who eventually put Horry Watts behind bars.

And what about the trigger man whose actions on March 23, 1978, affected so many lives?

If it is true that a killing can crack a place wide open and spill out long-kept secrets, then what had become of the community at the epicenter -- Sellerstown?

Over the next several months, I drove more than 2,500 miles across the South -- from Sellerstown, North Carolina, to Mobile, Alabama, to the Appalachian foothills in Tennessee -- exploring how the actions of a few still echoed through the lives of many.

Listening to their versions of events, watching folks grapple with what happened while holding fast to their faith, I realized this wasn't just a murder story. For them, it was a struggle between the forces of good and evil.

In Sellerstown, I found everyone talking about the same thing: the little girl few had laid eyes on since she took the witness stand three decades ago.

And her book of revelations.

She was 7 when she watched a man gun down her mother and father. Her memoir, "The Devil in Pew Number Seven," surprises even those who witnessed the family's ordeal.

They moved to Sellerstown, N.C., in 1969 to run Free Welcome Holiness Church. But someone would try to run them out of town -- and worse.

The "devil" in Rebecca's book was a powerful man who her father challenged. Was it this small-town spat that escalated into something so heinous?

In 50 years as a newspaper reporter, she's never covered another story that compares with the six-year campaign of terror against the preacher and his family.

He served 21 years for the second-degree murder of Ramona Nichols. But his trial left many questions unanswered. Why did he shoot the people he considered friends? 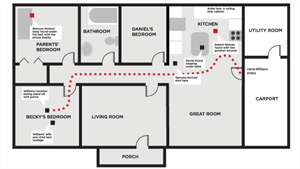 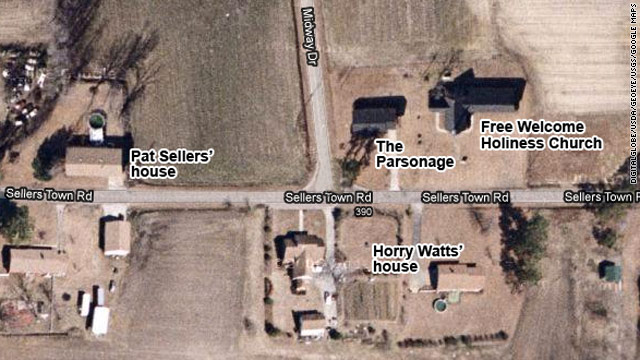 Six more explosions rock the church and the parsonage

Williams is sentenced to life in prison in Bladen County Superior Court.

Watts is released from prison on parole.

Robert Nichols dies after a blood clot lodges in his heart.

Watts dies at the age of 85 at Columbus County Hospital.

Williams is released on parole from state prison.

How this story was reported

Intrigued by the terror campaign her family faced in the 1970s, Drash traveled to Sellerstown, North Carolina, where Nichols' home and church were bombed 10 times and where her mother was killed in 1978.

Drash spoke with more than a dozen people in the community, including the lead investigators on the case, current sheriff's office personnel, neighbors and the man convicted of killing Rebecca's mother.

He also met with Rebecca's younger brother, Daniel, and the aunt who raised them.

Among the hundreds of pages of documents Drash examined were trial transcripts, newspaper clippings, sheriff's files and evidence amassed by the federal agent who worked on the case for the Bureau of Alcohol, Tobacco and Firearms. 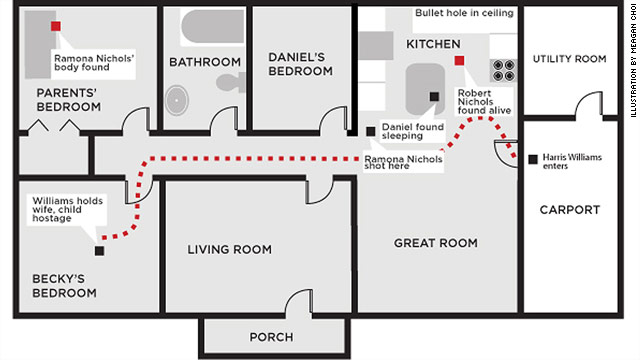