By noon, the majority of the Jefferson County Sheriff's Office investigators were on scene interviewing the fleeing students and faculty who provided vital information on what was occurring inside the school and who might be involved.  This information was passed on to the incident commander to be relayed to the SWAT teams searching the school.  Several investigators remained at the Sheriff’s Office headquarters in Golden to assist with warrants and interviews taking place at the headquarters.  Investigation Division Captain Daniel Harris coordinated information exchange with the school district and other agencies.

It was soon apparent that Dylan Klebold and Eric Harris were being named as possible suspects in the shootings at Columbine High School.  Investigators and patrol officers were sent to secure the Klebold and Harris residences in order to preserve any evidence until search warrants could be obtained.  When investigators arrived at the Klebold residence they contacted Thomas and Susan Klebold, the parents of Dylan and his brother, Byron.  Also present was a family friend who had been staying in their guesthouse.  A second team of investigators arrived at the Harris residence and contacted Wayne and Kathy Harris, the parents of Eric.  A family friend was also at the residence.  Investigators walked through the residences to ensure that no one else was present and discovered incendiary devices in both homes.  The occupants were evacuated and bomb technicians were immediately dispatched to both homes.  Meanwhile, the investigators at the school were giving critical information from their interviews to investigator Kate Battan who, in turn, telephoned headquarters and dictated search warrants for the Harris and Klebold homes.  A Jefferson County judge subsequently signed the warrants, and the searches were conducted on both homes.  Searches of both suspects’ residences were in progress before the bodies of the two killers were found inside the school.

Lt. Kiekbusch phoned Arvada and Lakewood police investigation commanders and requested assistance in interviewing victims taken to the metro area hospitals.  Investigators were to obtain information on the injured students and to preserve and collect any evidence.  Interviews were conducted with those injured students who were able and vital information on the suspects was obtained.  Throughout the day investigators from nearly all the metro area law enforcement agencies arrived at Columbine High School and assisted in interviews, searches, and tracking down known and possible associates of Harris and Klebold.  This activity continued for the next three days.

On Friday, April 23, 1999, over 100 investigators met in the band room at Columbine High School and shared the critical information each had obtained during the previous three days.  Over 500 preliminary interviews were reviewed which named several critical witnesses, associates of Harris and Klebold, background information on the Trench Coat Mafia, and any indications of involvement by others.

On Sunday, May 2, 1999,  Sheriff Stone and Undersheriff Dunaway conferred with several key investigators, including Lt. Kiekbusch and investigators from other jurisdictions, to discuss the information currently known and to plan the direction of the investigation from that point.  The discussion ultimately led to the development of a multi-jurisdictional task force that would investigate the incident, an organization that would become the Columbine Investigation Task Force. Undersheriff Dunaway assigned Kiekbusch to direct the investigation.

Over the weekend, Capt. Harris helped secure space in the Countys' administration building for the task force operations.  Clerical support was provided by the FBI, the ATF and the Sheriff’s Office. Forty computers were installed for report writing, Internet searches and criminal history searches.  The FBI “Rapid Start” automated tracking software was installed on several computers to assist in tracking leads.  Rapid Start required every lead that came into the task force to be written on a lead sheet, entered into the computer, assigned a number and then given to an investigator to follow up.  The investigator would complete the assignment, and only after the written report was turned in, was the lead closed.  The Rapid Start program ensured that every lead was followed up and duplicate leads were kept to a minimum.  The task force completed over 3,900 leads in addition to the initial 500 interviews.

At the onset of this investigation it was apparent that no one agency could effectively handle the number of leads, interviews and evidence analysis which this case required.  Approximately 80 investigators from a dozen city, county, state and federal law enforcement agencies formed the Columbine Task Force.

The main objective of the investigation was to determine exactly what occurred at Columbine High School and to determine whether anyone else participated in the shootings, assisted in the planning or had prior knowledge of what Harris and Klebold did on April 20. Another objective was to interview every student, faculty member and employee of Columbine High School and determine where each individual was at the time of the shootings and what they witnessed. The investigation also gathered background information on Harris and Klebold, the Trench Coat Mafia and their activities.

Seven teams were formed to deal with specific areas of the investigation. Each team identified critical witnesses who provided significant information or witnessed the actions of Harris and Klebold on April 20, 1999.  Summaries were then prepared detailing those critical witnesses. 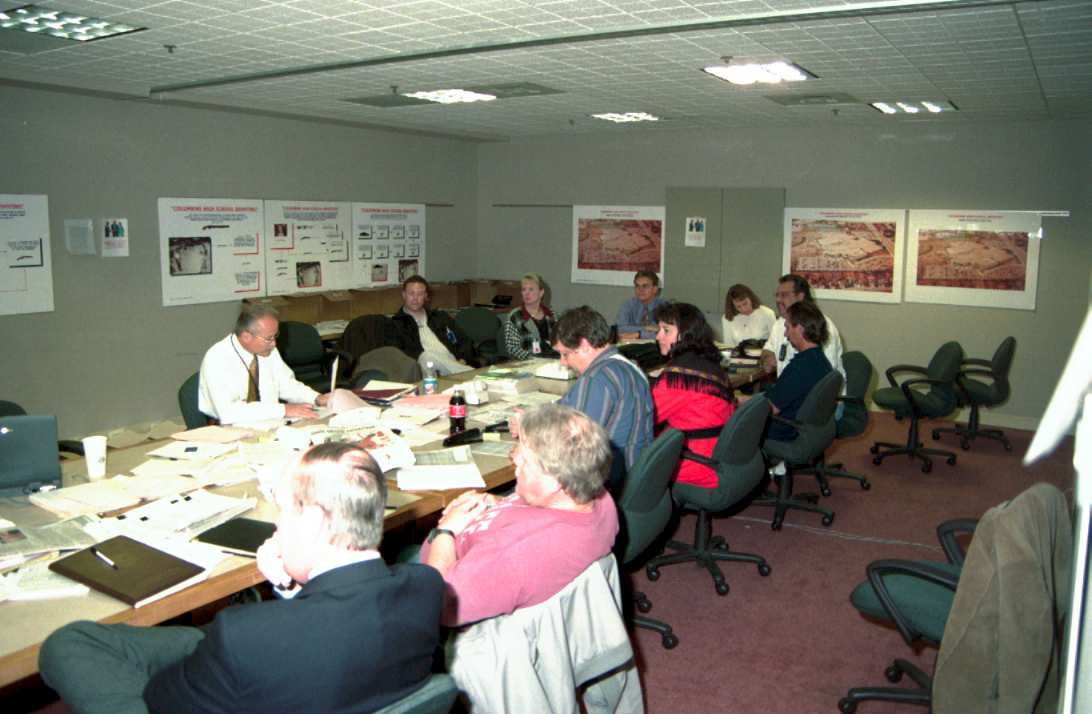 As the investigation came to a conclusion, a timeline was compiled detailing all the significant activities and events which occurred on April 20, 1999.  This is the timeline used as a basis for this comprehensive report.  The information for the timeline came from many different sources to include witness interviews, written reports, videotapes, 911 calls, law enforcement and medical radio traffic, evidence, ballistic reports and autopsy reports.

Although the investigation into the shootings at Columbine High School reached conclusion in January 2000, the case remains open in the event that any new information comes to light.