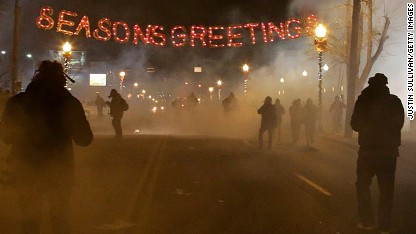 The grand jury has made its decision not to indict Officer Darren Wilson in the death of Michael Brown last August in Ferguson, Missouri. But another verdict became clear last night, too. The decision by St. Louis County Prosecuting Attorney Robert McCulloch to announce the decision at 8:30 p.m. CT was foolish and dangerous.
FULL STORY 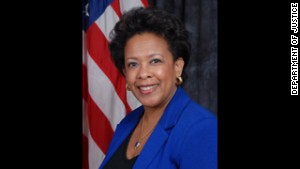 The prominent man had an altercation with his wife at a hotel. He beat her up. There's even a recording of it. And what happened? A plea deal so generous that the abuser's arrest record will be expunged -- totally clean, as if the whole thing had never happened -- if he receives some counseling in the next few months.

After two days of tense arguments in the Supreme Court over same-sex marriage, we don't know for certain how the justices will rule on either California's Proposition 8 or the Defense of Marriage Act. But we did see -- over and over -- Chief Justice John G. Roberts' irritation with and contempt for the Obama administration.

Every chief justice of the United States picks a signature issue. After Wednesday's argument on the future of the Voting Rights Act, it's clearer than ever that John Roberts has made his choice: to declare victory in the nation's fight against racial discrimination and then to disable the weapons with which that struggle was won.

How much has the South changed?

The Fifth Circuit's homework assignment to the Department of Justice is a disgrace -- an embarrassment to the federal judiciary. Still, it's a useful window on the contemporary merger of law and politics.

When the Supreme Court hears an extraordinary three days of arguments this week about the constitutionality of the Affordable Care Act, thousands of words will pass between the justices and the lawyers appearing before them. Still, it's likely that the single most important word in the case will never be uttered in the courtroom:

The case against Manssor Arbabsiar, the Iranian-American charged with conspiring to assassinate the Saudi Arabian ambassador to the United States, looks like a dazzling mix of high drama and low comedy, high stakes and low dealing. The prosecution has enormous implications for the United States' relationship with Iran -- and thus for world peace -- but it's also a criminal case in an American courtroom. So it's worth asking: how strong is that case?

The most important part of criminal law doesn't appear in any statute book or textbook. It's not even a formal "law" at all. It's the concept of prosecutorial discretion, and it is at the heart of our justice system -- as the pursuers of Casey Anthony and Dominique Strauss-Kahn have discovered.

Earlier today a state Supreme Court judge released Dominique Strauss-Kahn, the former International Monetary Fund director charged with sexual assault, on his own recognizance in a stunning reversal for the high-profile case.

The Supreme Court ruled that a Kansas church whose members travel the country to protest at military funerals, holding signs that say "Thank God for dead soldiers" and "God blew up the troops," has a right to continue such demonstrations.

The Arizona immigration law goes into effect on Thursday -- maybe. On July 29, it will be 90 days since the end of the legislative session -- which is the time when Arizona laws go on the books -- but the controversial measure has already drawn the first of many court challenges.

Americans can expect a roaring debate over social issues in the discussion of the next Supreme Court nominee, but in the end, President Obama's choice to succeed Justice John Paul Stevens is likely to be confirmed, CNN senior legal analyst Jeffrey Toobin says.

Chief Justice John G. Roberts Jr. is fond of pointing out the original reason that judges came to wear black robes. It's to make them look alike, to minimize the differences between the individuals who occupy the role and to suggest that the law will be applied even-handedly, no matter who happens to be dressed in black.

The 23-year-old Nigerian man who has been charged with attempting to blow up a Detroit-bound international flight on Christmas Day is likely to be treated as a regular criminal defendant, according to CNN senior legal analyst Jeffrey Toobin.

U.S. Supreme Court Justice David Souter plans to retire after more than 18 years on the high court. He said Friday in a letter to the White House that he will leave the court after the current session ends in June.

Congressional hearings rarely produce much news of interest, or much good for the world, but the House Government Reform Committee did a great service to baseball -- and the country -- on March 17, 2005.