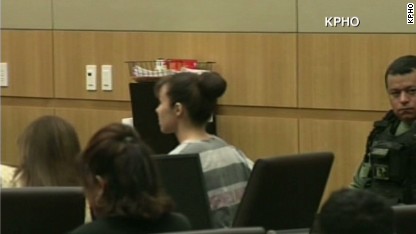 Jodi Arias appeared in court as attorneys scheduled the next pretrial conference with the judge.
FULL VIDEO 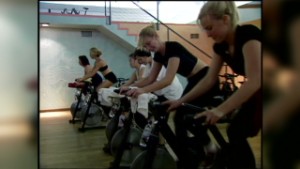 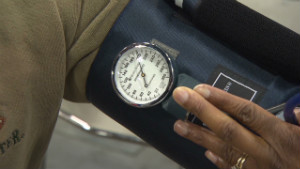 What to eat after a workout?

How to bend right back into shape

Fitness expert Desiree Nathanson and CNN's Fredricka Whitfield show how to incorporate yoga into your day at the park.

Forget the gym, hit the park for summer

Pain meds: The pill or the patch?

Many of us are used to taking pills for pain. But now, there are patches that can offer pain relief.

Sleep deprivation and your health

Dr. Sujatha Reddy joins Fredricka Whitfield to explain why not getting enough sleep can lead to major health problems.

Coffee may delay onset of Alzheimer's

Sugary drinks and your health

CNN's Fredricka Whitfield talks to Dr. Sujatha Reddy about the effects of sugary drinks on your health.

Carol has her running technique examined

FitNation's Athletic Director April Gellatly gives tips on how to run right to avoid injuries while increasing your speed.

Health for Her - Hydration

Carol's training for a mini-triathlon. She's sweating a lot, so we wanted to know just how much water should she drink?

How to stretch for the big race

CNN's Carol Costello shares some tips on when to stretch in this week's Health for Her.

Help for women to get sleep

Elizabeth Cohen explains reasons why some women can't sleep and has some tips.

Fewer women in their 40s are getting mammograms. CNN's Elizabeth Cohen reports.

Who needs to get a mammogram?

Eating for two at holidays

Got cellulite? Too bad!

What is cellulite? More important, how do you get rid of it? Elizabeth Cohen reports.

CNN's Elizabeth Cohen looks at the difference between needle and operation breast biopsies.

It's all in your face

CNN's Judy Fortin tells us about something called personology, and how it can get in your face.

Keep in shape for less

Expensive gyms and gadgets are not the answer to keeping in shape. CNN's Judy Fortin reports on the inexpensive way.

Judy Fortin tells us about one cutback women are making in these tough economic times.

CNN's Judy Fortin looks at the risk of lung cancer in women.

These are times not for the faint of heart. Not for the faint of wallet either. With the stock market seemingly out of control and with prices on goods and services taking a page from Buzz Lightyear's playbook and going "to infinity and beyond," it's a tense time for many.

Shoes tell a lot about a person. If you stumbled into my closet, you would probably think I was a security guard, a construction worker or a Nurse Ratched wannabe. My taste in shoes tends to be boxy, low-heeled and sturdy.

Sometimes a little radiation might be too much. CNN's Judy Fortin reports.

Dental fitness as we age

CNN's Judy Fortin looks at how to take care of your dental health over time.

Shots are for grown-ups, too

Children aren't the only ones who need to get vaccinated -- grown-ups do, too. CNN's Judy Fortin reports.

These are times not for the faint of heart. Not for the faint of wallet either. With the stock market seemingly out of control and with prices on goods and services taking a page from Buzz Lightyear's playbook and going "to infinity and beyond," it's a tense time for many.

Women are twice as likely to suffer from high anxiety than their male counterparts.

Stress may play a role in a child's future, as passed from mother to baby during pregnancy. Judy Fortin reports.

Shoes tell a lot about a person. If you stumbled into my closet, you would probably think I was a security guard, a construction worker or a Nurse Ratched wannabe. My taste in shoes tends to be boxy, low-heeled and sturdy.

Pedicures can be dangerous

CNN's Judy Fortin looks at how to keep a pedicure safe and fungus-free.

CNN' s Judy Fortin looks at what exactly is depression and how can it be treated.

Remember that old adage, "You can never be too thin or too rich"?

What age and how white?

How low should you go when it comes to age and flashing those pearly whites? CNN's Judy Fortin reports.

Vaccinations aren't just for kids. CNN's Judy Fortin reports on why adults need their shots too.

As we age we grow, not only in wisdom, (one hopes) but also in size (one hopes not!).

The passage of time doesn't mean your weight has to advance too. CNN's Judy Fortin reports.

The skinny on body wraps

CNN's Judy Fortin looks at how effective those body wraps are for shaping up.

Getting enough rest should be as simple as just shutting your eyes.

CNN's Judy Fortin reports on a new way to catch some zzz's during your day.

Women, listen to your heart

Health for Her looks at how women are still not aware of their heart health risks. Judy Fortin reports.

When I first heard about digital mammograms, my first thought was, "This could be good."

In Health for Her, CNN's Judy Fortin looks at the difference between digital and film mammograms.

CNN's Judy Fortin looks at some reasons women need to work out and lose weight.

Our visits to the gym seem to be a lot more dangerous lately. Forget battling only boredom and feeling the pain. Now the fight is us against them -- and the enemy is germs.

CNN's Judy Fortin explores how to keep germs away from your health club.

Growing up, my Sherman tank-like aunt constantly blamed her thyroid for inability to lose weight.

CNN's Judy Fortin looks at how to keep your skin safe under the summer sun.

In our constant battle of the bulge, a new weapon is gaining in popularity.

CNN's Judy Fortin looks at the dangers of tanning beds.

Massage, that art of laying on hands, has been around for a while and has seen some changes through the years.

Very few people question the importance of water in a healthy diet, but lately the needed quantity has been called into question.

CNN's Judy Fortin looks at just how much water we really need to stay healthy.

I am not a Trekkie but most days, I feel like I could be living on the starship Enterprise.

Mother needs time for herself

CNN's Judy Fortin looks at why mothers need to take time out for themselves if they want to be good mothers.

CNN's Judy Fortin offers some tips on how to get ready in a hurry for swimsuit season.

As a mature woman -- at least chronologically -- I don't spend a lot of time thinking or worrying about menopause.

They might be the apple of your eye, but chances are, they're the reason the apple pie is sticking to your thighs! That's right, our kids are making us fatter. Well, actually, less fit. Researchers at the University of Pittsburgh studied 525 adults and found that although marriage has almost no effect on how much time men or women exercised, having children does.

I am surprised that women are technically still not allowed to take part in direct combat; in my opinion nobody knows how to fight better. Sure, we might be missing some of the brawn, but I think we more than make up for it with two equally essential war-fighting attributes: patience and pain tolerance.

Lets face it: All the information around cholesterol makes it something of a confusing topic. Not only do we make our own cholesterol, but we also must have it to produce other important body assets, such as cell membranes and certain types of hormones.

Are money worries making your get-in-shape resolution harder to achieve? Nothing like a tumbling stock market to make you reach for that extra slice of chocolate cake, right? But don't hang up the towel just yet. Fiscal fitness doesn't have to tank your physical fitness. There are ways to recession-proof your goal for a new you.

New research out Monday may have expecting moms rethinking their drinking habits.

You are what you eat -- and what you don't eat. And so if you are like many of us, not quite hitting the entire food pyramid, you might be trying to outwit your body by giving it nutritional supplements to make up for the sins of food-group omissions.

It's the season for giving and receiving -- yes, of course, gifts and food and holiday cheer, but also something you probably don't want: germs.

Is it just me or does everyone hear the "Jaws" theme in his or her head when arriving at a holiday buffet? The only question is whether I'm the shark going on attack or it's some sort of mating call to those extra pounds that will no doubt settle somewhere on my body. It's probably a combination.

"If it sounds too good to be true, it is." Remember that axiom if you're considering cosmetic surgery. A nose job, tummy tuck or breast lift may change your appearance, but it probably won't fundamentally change your life.

If you want to stand up tall when you're old, you might want to start when you're young. While osteoporosis, or thinning of bone density, usually hits most women after they have gone through menopause, there are steps they can take in their early years to lessen just how much bone they eventually lose.

For the last few years I've thought I'd like to walk in the Breast Cancer 3-Day. The idea of doing something incredible with more than 2,500 other women for such a great cause seemed like the perfect goal for me.

We've heard for nearly a decade about the benefits of alcohol -- red wine in particular. It's good for your heart and may have other positive effects. In moderation, we thought, it's not only OK, but actually good for us.