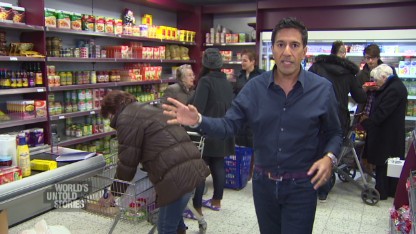 CNN's Dr. Gupta travels to Hogewey, a small village in Weesp, the Netherlands, where every resident has severe dementia.
FULL VIDEO 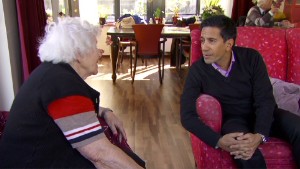 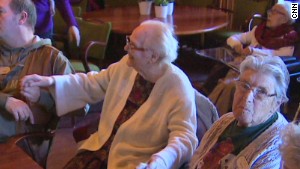 CNN's Dr. Sanjay Gupta travels to the Netherlands for a look at a revolutionary new way of caring for dementia patients

CNN's Dr. Sanjay Gupta speaks with a co-founder of Hogewey about why she and her team built the elder care facility

In part one of "Adopting Africa," CNN's Isha Sesay takes a look at the red flags waving over Uganda's adoption boom.

The daughter of a woman killed in Northern Ireland's violence hopes tapes made by fighters can bring some closure.

CNN's Nic Robertson brings us the story of one woman whose high-profile murder was never solved.

No One Left Behind

A team dedicated to finding, recovering and identifying every missing U.S. service member opens its doors to CNN.

A fitting burial for U.S. troops

After bringing home the remains of fallen U.S. troops, a forensic team confirms their identity before burial.

Forensic anthropologist Dr. Robert Mann shows how a photo and a skull can help identify the remains of U.S troops.

They call it 'corrective rape'

20-year-old Zukiswa Gaca tells CNN why she ended up lying on a railway track attempting to take her own life.

A victim's quest for justice

After over a year of waiting, Zukiswa Gaca follows up her reported sexual assault with South African authorities.

They call it 'corrective rape'

Memories of a massacre

After German troops stormed the Tuscan hamlet of San Pancrazio, Italy in 1944, families returned to homes in ruin.

A quest for healing and justice

World's Untold Stories travels to Tuscany where a secret archive uncovered hidden proof of a massacre by Nazi SS.

Memories of a massacre

A San Pancrazio massacre survivor leads a tour of the site where 73 people were executed during World War II.

Terror in Tuscany: Behind the scenes

The producer of "World's Untold Stories: Terror in Tuscany" discusses the background and inspiration for the program.

The Italian community of San Pancrazio gathers for an annual vigil, to remember the victims of a 1944 massacre.

CNN's David McKenzie looks into a world of anguish and misunderstanding of mentally handicapped individuals.

CNN correspondents share their experiences in a preview of CNN's special report Witness to Disaster: Japan.

In 1970, Marty Connor met a former soldier who devoted his life to returning souvenirs back to the Japanese.

Former U.S. Marine Marty Connor describes what he had to do when he fought on the island of Iwo Jima.

On the receiving end of Marty Connor's shipments to Japan is Masataka Shiokawa, whose father was killed at Okinawa.

Explaining the process for returning flags

Former U.S. Marine Marty Connor explains the process for returning flags to families of Japanese soldiers who fought in WWII.

Explaining the map of Iwo Jima

World's Untold Stories features an emotional journey, and the efforts to return spoils of war to the dead Japanese soldiers' families.

Doctors race to test prevention therapies that could lead to a treatment, a delay or a cure for Alzheimer's disease.

CNN's David McKenzie looks into a world of anguish and misunderstanding of mentally handicapped individuals.

Edah Maina knows the effort it takes to bring those suffering from the darkness into the light.

CNN shows you the hardship the poor individuals in Kenya have to go through to help their handicapped children.

While filming "Locked Up and Forgotten", David McKenzie and his crew are themselves locked up in a psychiatric hospital.

Locked up in hospital

Patients complain of terrible conditions inside Mathari hospital as CNN's crew is temporarily locked up, too.

Mentally ill Joseph can barely move, but he gets little help from Kenya's cash-strapped health system.

The Noonan family describes their struggle with early-onset Alzheimer's, and their hope that a cure could be found in Colombia.

Doctors hope to learn from Colombian families with genetic mutations, which put them at risk of developing early-onset Alzheimer's

Families with a unique genetic mutation are left to wonder who among them will be next to develop Alzheimer's disease.

CNN's David McKenzie tells the touching story of a Kenyan mother and her mentally disabled son struggling to survive.

Three million mentally disabled people live in Kenya's slums and villages, most are hidden away, often chained up and abused.

Putting the puzzle together

Dr. Pierre Tariot, a researcher and psychiatrist, describes the progress that has been made in Alzheimer's research.

Quick view of a CNN shoot in Colombia

A sped-up record of CNN crew assembling, then dismantling an outdoor camera set-up in Yarumal, Colombia.

What can you do to reduce your risk of getting Alzheimer's disease? Some medical and lifestyle suggestions.

Testing the difficulty of memory loss

Preview of 'Filling the Blank'

August 2010: World's Untold Stories goes to a migrant hostel where immigrants tell their stories of working in America.

The Taliban way of life

CNN's Anderson Cooper debriefs Paal Refsdal on how he embedded with the Taliban, what he saw and the images he captured.

Living with the Taliban

Independent Norwegian journalist Paal Refsdal managed to convince the Taliban to let him film them for 9 days.

The Taliban at war

CNN shows the different views of the Taliban, to some they're holy warriors, to others they're rebels and terrorists.

CNN's World's Untold Stories gains in-depth access to the Taliban as you have never seen them before.

CNN tells the story of Kachepa and the minister who forced him to perform in churches across the U.S. for no pay.

Sandy Shepherd tells CNN she couldn?t find Kachepa a decent home, so she took him in.

Being exploited for work

Sandy Shepherd tells CNN about what she did once she found out the Zambian choir boys were being exploited.

The making of a bad surgeon

World's Untold Stories looks at how Dr. Jayant Patel was able to perform surgeries he was not qualified to perform.

They called him 'Dr. Death'

World's Untold Stories follows the trail that took Dr. Jayant Patel from the operating room to an Australia prison cell.

Dr. Jayant Patel got 7 years for the terrible life-altering injuries and deaths that he caused.

The discovery of being Jewish

Ola tells CNN's World?s Untold Stories about her experience when she found out her Neo-Nazi husband was also Jewish.

A culture of denying Jewish heritage

In a culture after WWII where it was not seen as normal to be Jewish, many children did not know about their heritage.

World's Untold Stories showcases a documentary about a Neo-Nazi couple who find out they have Jewish heritage.

Part 1 of a shocking documentary about a Jewish family being attacked during the terrorist attacks in Mumbai.

Part 2 of a shocking documentary about a Jewish family being attacked during the terrorist attacks in Mumbai.

The next generation of Greeks in Turkey

World's Untold Stories examines whether new Greek immigration into Turkey will be enough to save the Patriarchate.

What was believed to be an ancient Islamic site in Istanbul turns out to have a much different history.

The Ecumenical Patriarch of Constantinople makes a pilgrimage to his birthplace on the Turkish island of Imbros.

World's Untold Stories reports on La Bestia, a train that carries many illegal immigrants into America.

World's Untold Stories follows Jessica, who is determined to reach America and live her dream.

The correspondent, the producer and the editor discussing "The Beast", a cargo train migrants ride in search of a brighter future.

On the trail of Khmer Rouge interrogator

A target of ethnic hatred

World's Untold Stories reports on the shocking story of Neo-Nazis targeting a small girl in the Czech Republic.

The trial of the Neo-Nazis

CNN shows the trial of the Neo-Nazis accused of attacking Natalka before her second birthday.

Lucie Horvathova says support from family and friends help her cope with discrimination from "stupid people."

Nearly 4,000 people died instantly during the 1984 Bhopal gas leak. The anger is still raw for many survivors.

TVR Romania's Razvan Marc talks to unemployed miners in Romania about the economic future of their town.

Will Grigg is a Christian Exodus member living in Idaho, he talks about why taking benefits from the government is a sin.

Brother Gregory is a shepherd and founder of His Holy Church in Oregon. Keith Humphrey is executive director of Christian Exodus.

Keith Humphrey says their allegiance is not to the central government.

A brother and a shepherd

Brother Gregory: We have become a self-centered society.

Will Grigg: The government that rules us has no legitimacy.

CNN takes you to Juchitan, Mexico where what they consider a third gender not only exists but are integrated into society.

CNN reports on the evolution of Mexico's third gender, the muxe.

CNN reports on what it means to be a muxe today in Mexico, the future of the third gender.

Marie Collins was the first female vicitim of church sex abuse in Ireland to go public with her story.

Patrick Wall, author of "Sex, Priests and Secret Codes," has been a witness in hundreds of sex abuse cases against the Church.

CNN colleagues reflect on photojournalist Margaret Moth, who was nearly killed by a sniper's bullet in 1992. (Part 1)

'Wanted to come back and work'

After her cancer diagnosis, Margaret Moth talks about her quick return to Sarajevo after being shot by a sniper. (Part 2)