'The Colbert Report' finale: Stephen Colbert signs off with a song

(CNN) -- For his final show, Stephen Colbert went out with a bang and a song.

The Comedy Central host aired his last episode of "The Colbert Report" on Thursday as he prepares to take over David Letterman's "The Late Show" in 2015. 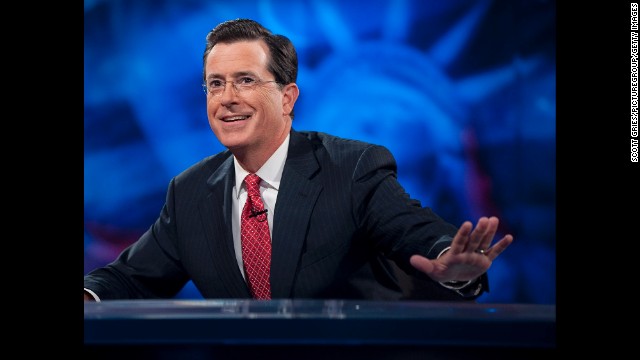 Stephen Colbert will take over "The Late Show" upon the retirement of David Letterman in 2015. Colbert's rise includes a number of notable moments. 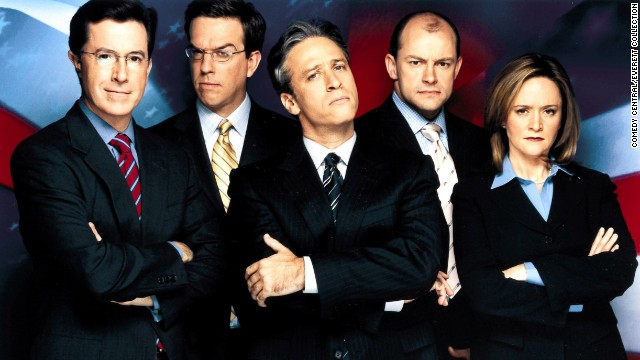 Colbert, left, was originally one of "The Daily Show's" correspondents. He began with the show during its Craig Kilborn era and stayed when Jon Stewart, center, came to host in 1999. Others on the show included, from left, Ed Helms, Rob Corddry and Samantha Bee. 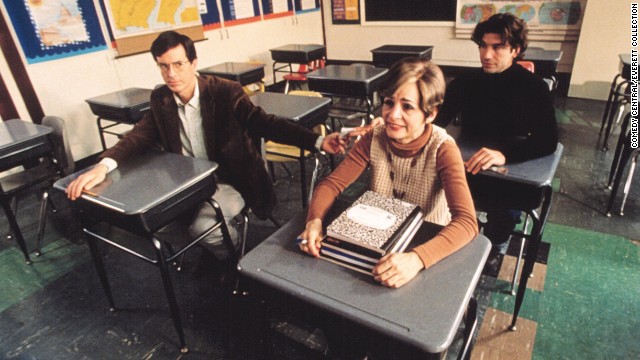 While appearing on "The Daily Show," Colbert was also part of the cast of "Strangers with Candy," a comedy series with Amy Sedaris and Paul Dinello. He met the pair while he was a member of the Second City comedy troupe in the early '90s. 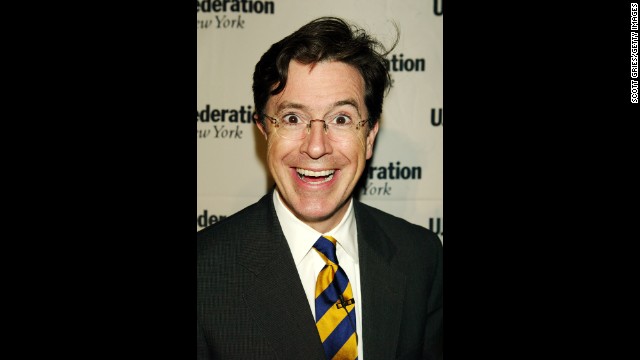 As a "correspondent" and later an anchor, Colbert developed a character that has been, at turns, pompous, pious and egocentric -- basing the persona on many others in television. 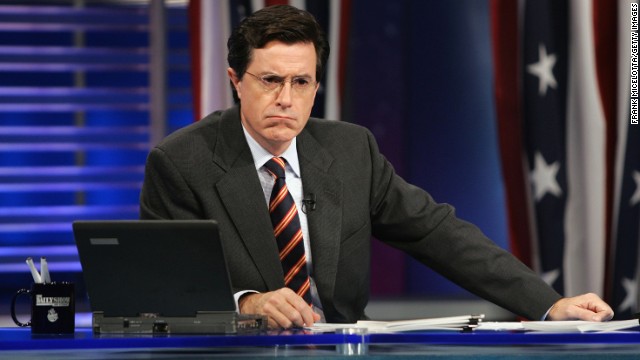 As correspondent, Colbert was key to "The Daily Show's" election coverage. Here he takes part in Election Night 2004. 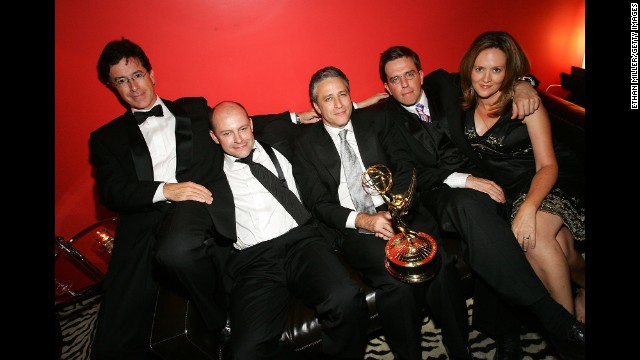 Colbert's work on "The Daily Show" contributed to a number of awards -- including several Emmys. He poses here with, left to right, Rob Corddry, host Jon Stewart, Ed Helms and Samantha Bee. 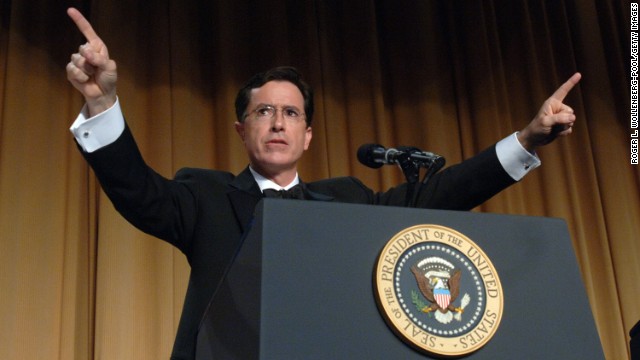 Colbert earned praise -- and notoriety -- for his hosting of the 2006 White House Correspondents Dinner. In character, his barbs about President George W. Bush and the political news media drew blood. 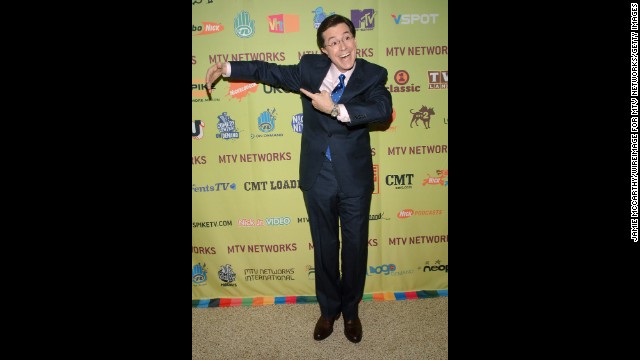 On "The Colbert Report" -- and that's pronounced "Col-bear Rap-pour" -- Colbert highlights the foibles of politicians with such segments as "Better Know a District," a proposed 435-part series in which he offers a take on every House District. The representatives he interviewed sometimes haven't been aware of the joke. 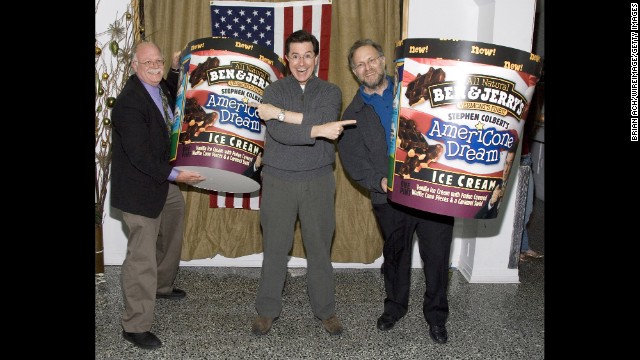 Very quickly, Colbert's influence rose so high that he got his own Ben & Jerry's ice cream flavor: AmeriCone Dream. Here he poses with Ben Cohen, left, and Jerry Greenfield at the flavor's launch party. 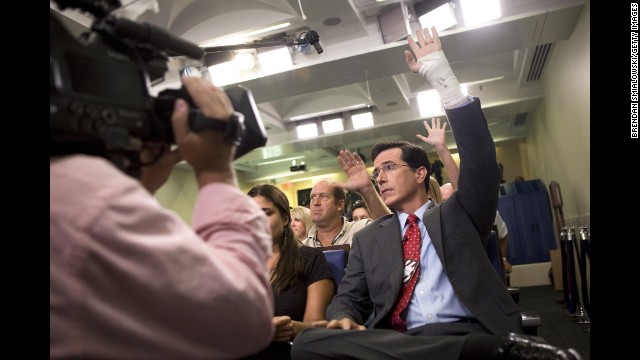 The White House hasn't been immune to Colbert's charms. He showed up for a mock press conference in 2007. 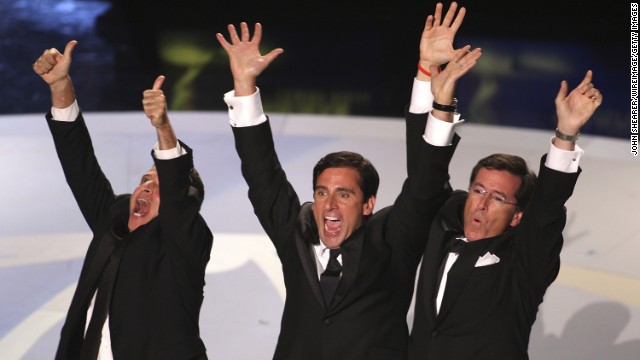 "The Daily Show" may have won a bunch of Emmy awards, but in 2013 "The Colbert Report" broke its streak of 10 straight awards for outstanding variety series. It's also won two Emmys for writing, as well as two Peabodys. 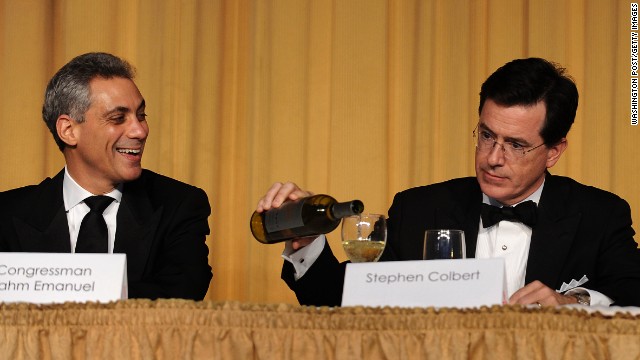 Colbert hosted a roast for then congressman -- and later Chicago mayor -- Rahm Emanuel in 2008. Colbert, a South Carolina native, has ties with Chicago, having gone to college at Northwestern, in nearby Evanston, and worked in the city's comedy scene. 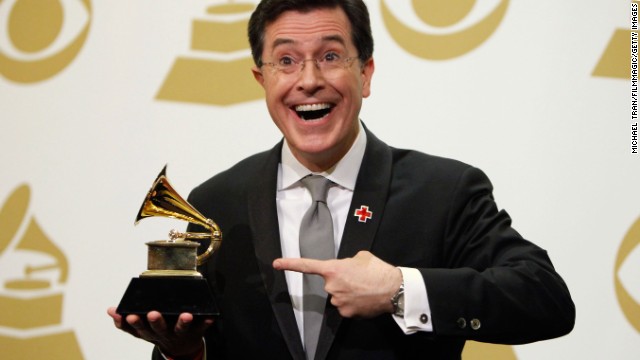 Colbert's awards haul isn't limited to Emmys and Peabodys. In 2010 he won a Grammy for his Christmas album, and four years later won another for best spoken-word album. 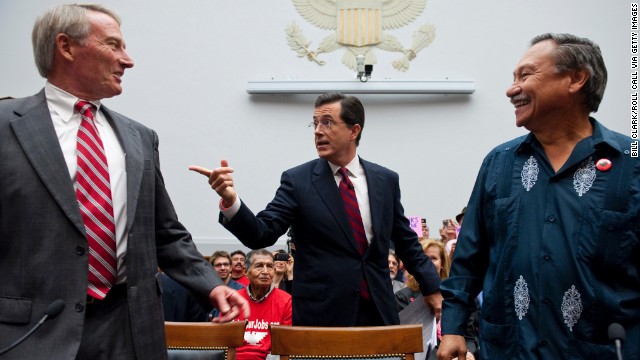 In September 2010, Colbert testified at a hearing on immigration. He took time to chat with Phil Glaize, chairman of the U.S. Apple Association, left, and Arturo Rodriguez, president of the United Farm Workers. Again, some representatives didn't get Colbert. 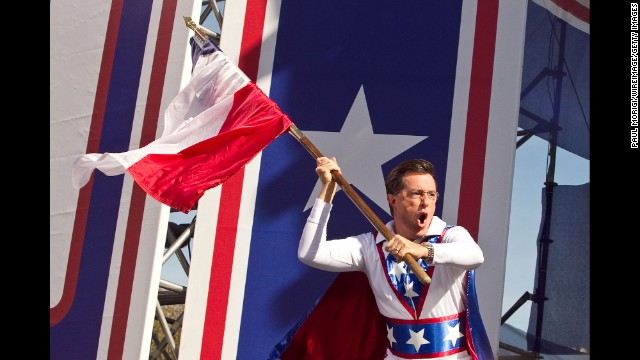 In October 2010 Colbert teamed up with Stewart for a Washington rally, "Rally to Restore Sanity and/or Fear." Stewart handled the sanity; Colbert took care of the fear. The rally was a response, sort of, to rallies led by Glenn Beck and Al Sharpton. 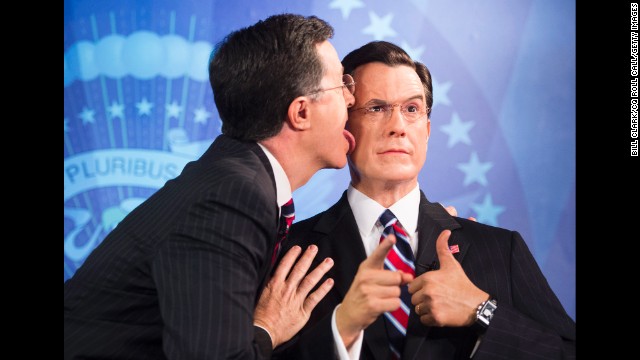 Colbert's character definitely loves himself. He went so far as to lick himself during the unveiling of his wax figure at the Madame Tussauds wax museum in Washington in 2012. 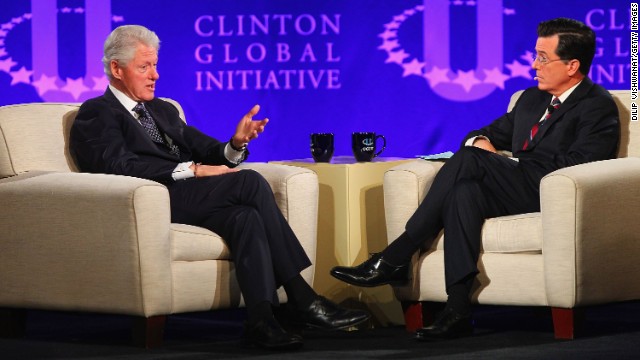 Colbert may be responsible for Bill Clinton being on Twitter. When the former president appeared on his show in 2013, Colbert set up an account, @PrezBillyJeff. Clinton later set up his real account, @billclinton. 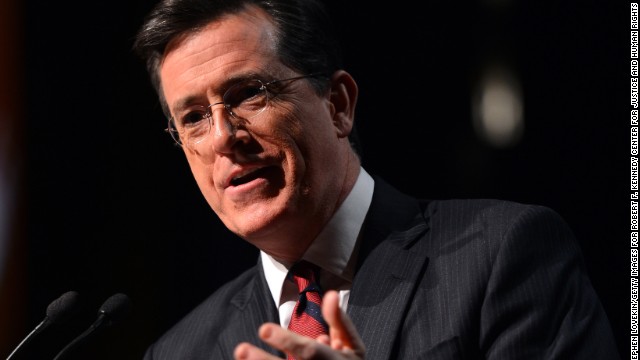 Colbert, a devout Catholic, has taught Sunday school and talked about social justice. He spoke at the Robert F. Kennedy Center for Justice and Human Rights 2013 Ripple of Hope Awards dinner. 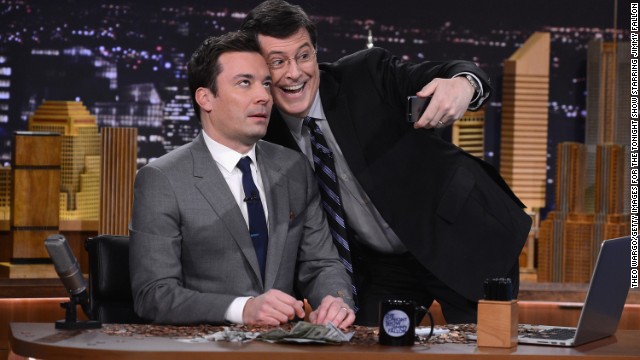 Colbert faces a changed talk-show landscape. Jimmy Fallon, left, has gotten off to a fast start as new "Tonight Show" host on NBC, and ABC's Jimmy Kimmel also has a strong fan base. Observers are curious whether Colbert will bring his character with him to "The Late Show." We'll find out when David Letterman steps down. 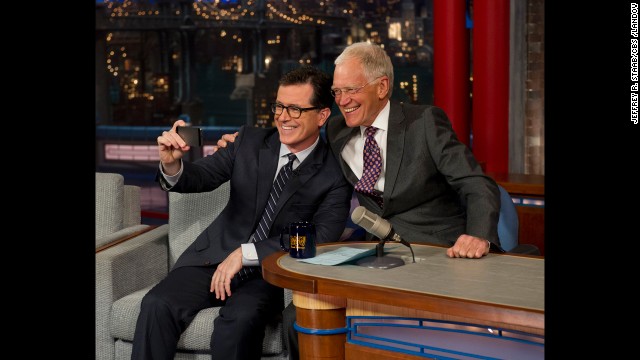 The man who was 'Stephen Colbert'

But for now, "like Mary Poppins or Gandhi," it's time for the Stephen Colbert we came to know on "The Colbert Report" to retire.

"The truthiness is all those incredible things that people say I did --- none of that was really me," Colbert said during his goodbye. "You, the Nation, did all of that. I just got paid for it."

So as a thank you, Colbert staged an elaborate farewell scenario that included him killing off death -- a.k.a., "Grimmy" -- with a handgun and becoming "immortal," promising that "We'll Meet Again."

To prove his point, Colbert rounded up pretty much every celebrity he knows -- from George Lucas to Big Bird -- for a performance of that very song.

Once the song and dance was done, Colbert was ready to sign off for good -- from eternity, and accompanied by Santa Claus, Abraham Lincoln and Alex Trebek. (Seriously.)

"We've finally come to the end of 'The Colbert Report,'" Colbert said. "Nine great years, 1,447 wonderful episodes -- I've just got too many people to thank. So I'll just thank Mavis Staples. Mavis, if you could just call everybody tomorrow, that would be great. ... OK, that's the show. From eternity, I'm Stephen Colbert."

But perhaps the best part about his sign-off is that it went right back to where it all started: with Jon Stewart's "The Daily Show."

"Thanks for that report, Stephen," Stewart said, before leading into the final scene of "The Colbert Report": an outtake from 2010 of Colbert and Stewart, being every bit as goofy and charming as we'd want them to be.