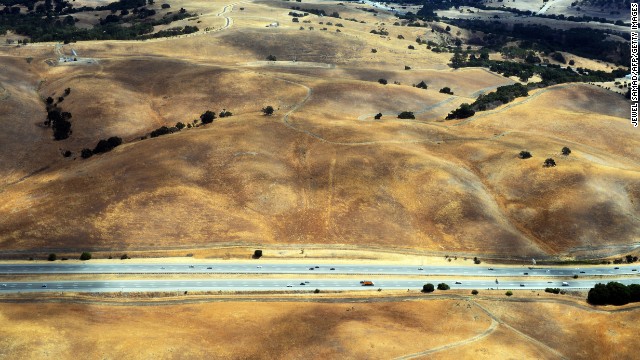 This picture taken from a helicopter shows a drought-affected area near Los Altos Hills, California, on Wednesday, July 23. One of California's worst droughts in decades could cost the state's farmers $1.7 billion, a recent study warned. The drought could leave 14,500 workers without jobs in California's Central Valley, known as America's food basket for providing vast supplies of fruit, vegetables and meat. 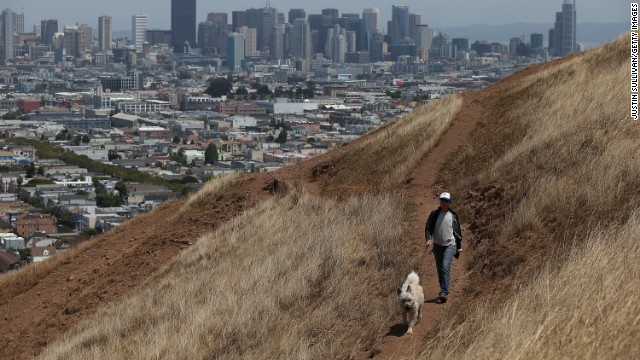 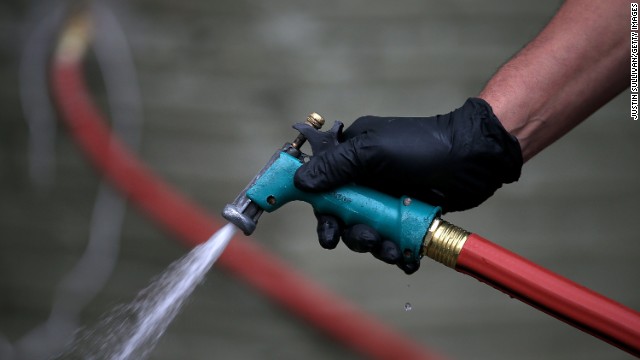 A worker washes the sidewalk in front of a residential hotel in San Francisco on Tuesday, July 15. 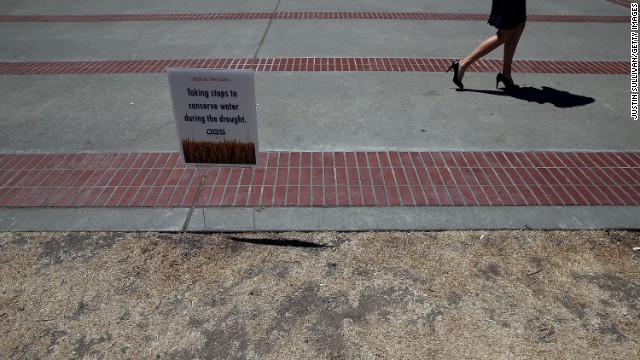 A pedestrian walks by a sign posted in front of the lawn at the California State Capitol in Sacramento on June 18. 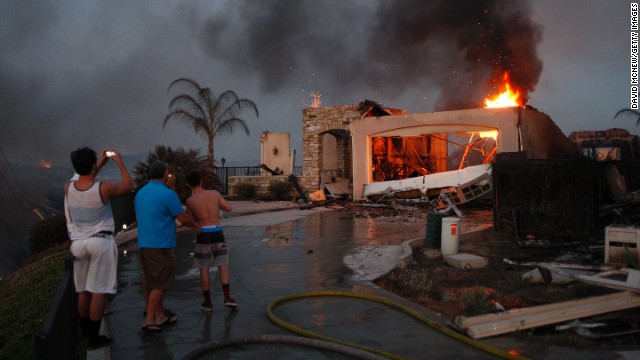 Residents photograph the burning ruins of their home that was destroyed in a wildfire in Carlsbad, California, on May 14. Drought conditions have fueled several wildfires across the state, fire officials said. 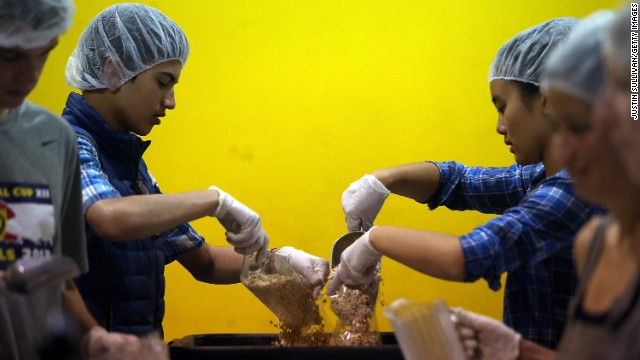 Volunteers pack bags of oatmeal at the SF-Marin Food Bank in San Francisco on May 1. The longstanding drought has contributed to an increase in food prices. 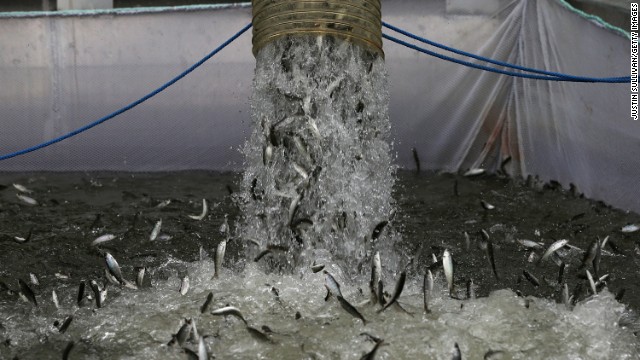 Fingerling Chinook salmon are dumped into a holding pen as they are transferred from a truck into the Sacramento River in Rio Vista, California, on March 25. Low water levels have forced wildlife officials to truck more than 400,000 fish nearly 300 miles. They usually make the trip on their own. 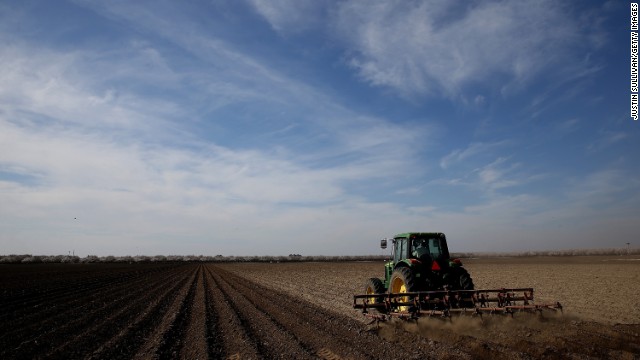 A tractor plows a field in Firebaugh, California, on February 25. Almond farmer Barry Baker had 1,000 acres -- 20% -- of his almond trees removed because he didn't have access to enough water to keep them alive. 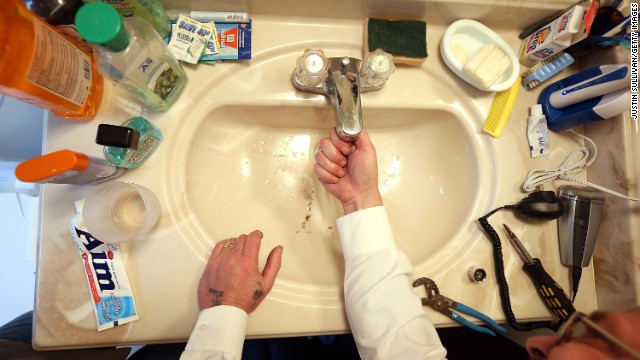 Plumbing technician Todd Snider installs an aerator at a home in Novato, California, on February 5. Residents have been installing water-saving devices in their homes to reduce their consumption. 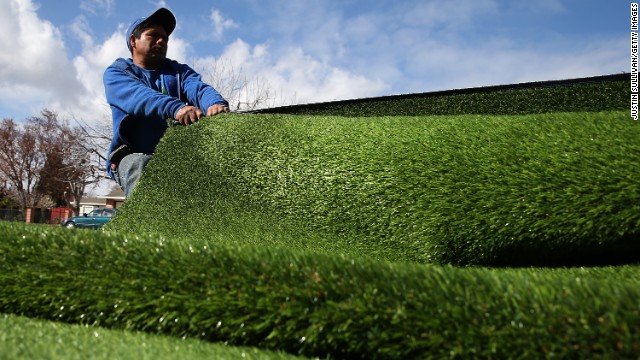 A worker installs an artificial lawn in front of an apartment building in San Jose, California, on January 30. 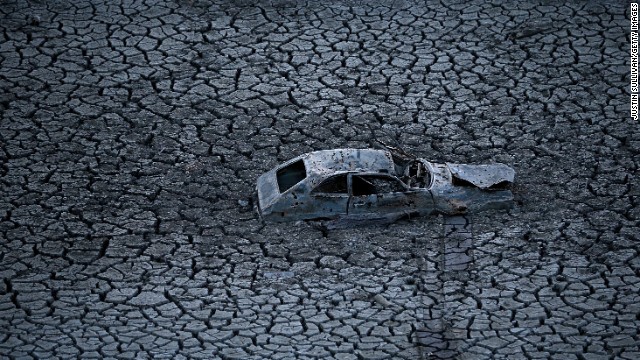 A car sits in the dried and cracked earth at the bottom of the Almaden Reservoir in San Jose, California, on January 28. 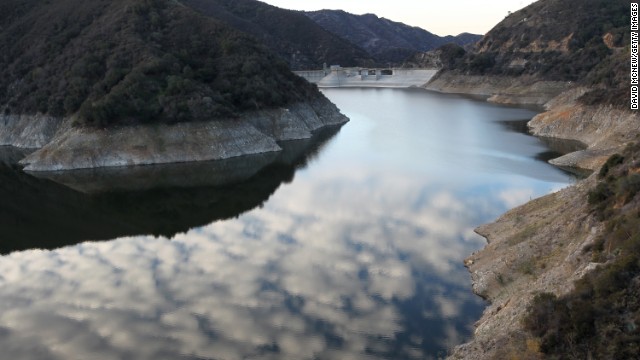 Rocky shores are exposed by the low waters of Morris Reservoir on the San Gabriel River near Azusa, California, on January 22. 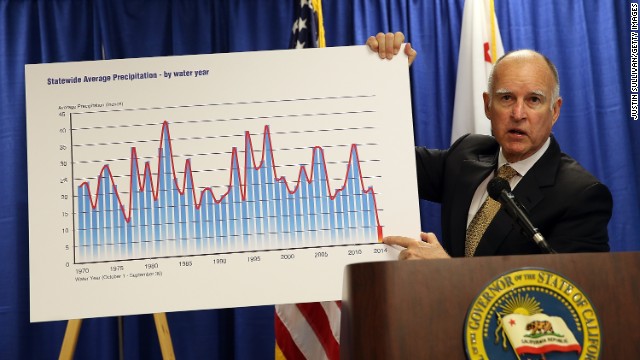 That's how much water California needs to recover from its extreme drought despite downpours that caused flooding and mudslides this month, NASA said.

This week, the space agency released a satellite data analysis of how much water the state's reserves lack.

No shower, no toilet: Is this America?

"It takes years to get into a drought of this severity, and it will likely take many more big storms, and years, to crawl out of it," said NASA scientist Jay Famiglietti, who led the study.

NASA climate satellites measured fluctuations in Earth's gravitational field and the changing shape of the planet's surface to determine the drop in water reserves. It's the first calculation of its kind to determine the amount of water needed to break a drought, the space agency said.

Virtually all of California is drought stricken, according to the University of Nebraska Lincoln drought monitor, most of it under the worst level -- "exceptional drought." 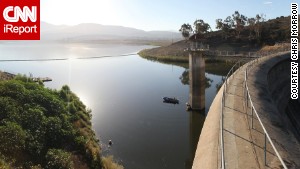 The Sweetwater Dam forms the Sweetwater Reservoir in San Diego County. Water levels are down at the reservoir, which stores water for the San Diego metropolitan area.

December's deluges doused parts of California in just a few days with double the rain or more that they usually get in a year.

An atmospheric river -- a moisture-laden stream of air from the tropics dozens of miles wide -- hosed the coast, and behind it, storm fronts battered the state.

Nearly a foot of rain fell in some places in a single day. Creeks and rivers previously flowing at a trickle swelled over their banks and flooded nearby streets.

The abundant rainfall gave the state's reservoirs an upward bounce, according to measurements by the Department of Water Resources.

One of the largest, Lake Shasta, went from a water level before the rains of 41% of its historic average to 53% on Tuesday. Another very large one, Lake Oroville, stepped up from a level of 44% of its average volume to 54%.

Some of the state's other 10 -- mostly much smaller -- main reservoirs felt a boost, too. Others, not so much.

More rain is in the forecast this week, but it will be gentle, not torrential.

The drought has dug so deep in the past three years that it has tapped into groundwater.

It has done this throughout the Southwest, where groundwater levels are at their absolute lowest levels in the last 65 years, said NASA's Jet Propulsion Laboratory in Pasadena.

The state's two largest river basins, the Sacramento and San Joaquin, have lost 4 trillion gallons of water per year since 2011, according to the analysis by NASA JPL.

"That's more water than California's 38 million residents use each year for domestic and municipal purposes. About two-thirds of the loss is due to depletion of groundwater beneath California's Central Valley," NASA said.

In September, Gov. Jerry Brown signed "historic legislation" that created "a framework for sustainable, local groundwater management for the first time in California history," the governor's office said at the time.

Before the new legislation, California was the only Western state that didn't manage its groundwater, officials said.

Brown declared a drought emergency, saying this was "perhaps the worst drought that California has ever seen since records (began) about 100 years ago."

He held up a chart of fluctuating rainfall levels over many years, with the graph plummeting off the bottom of the chart in recent years. 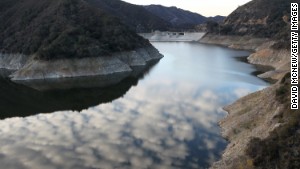 Rocky shores are exposed by the low waters of Morris Reservoir on the San Gabriel River in the Angeles National Forest on January 22, 2014, near Azusa, California.

The atmospheric river and cold fronts loaded up the Sierra Nevada mountains with a couple of feet of snow at the highest altitudes, adding to the snowpack. It acts as a major water reservoir, storing up moisture in the winter months and then releasing it during melts.

The storm's extra padding doubled the level to 48% of the historic average, a nice improvement.

But there's bad news here, too, based on studies done from airplanes this year, NASA said.

"The 2014 snowpack was one of the three lowest on record and the worst since 1977, when California's population was half what it is now," said NASA JPL scientist Tom Painter.

That not only means less water from snow but also less reflection of sunlight, which means the Earth absorbs it and gets that much warmer, Painter said.

The ground then also gets more parched, so when water does flow onto it, it soaks it up, leaving less of it to flow into reservoirs.

Mountain snowpack is only 48 percent of average for the date. #CADrought #SaveWater