(CNN) -- Oh, to be a fly on the wall when this photo of Angelina Jolie was taken.

On Wednesday at the Hollywood Reporter's Women in Entertainment breakfast, Jolie was photographed running into Amy Pascal, the Sony Pictures co-chairwoman whose emails were published by Gawker this week after a massive hack of Sony's private data.

CNNMoney: What to know about the Sony mega-hack

Those emails have gone viral thanks to their insider information and very blunt chatter about actors like Jolie, who was called "minimally talented" and a "spoiled brat" with a "rampaging ... ego" by producer Scott Rudin. 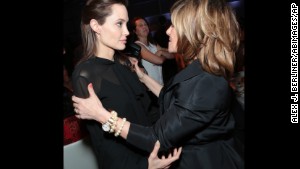 One would imagine that by the time Pascal ran into Jolie at Wednesday's Hollywood Reporter event, the actress-director herself would have heard about them.

It's hard to tell from the picture whether that's true, but that hasn't stopped the Internet from speculating. In the image, Pascal approaches Jolie as though she's going in for a hug, wearing a facial expression that could be read as apologetic.

It isn't clear what kind of exchange the two women had on Wednesday -- perhaps after the picture was snapped, they embraced with smiles.

But one thing's for sure: This is one photo worth a thousand words.

CNNMoney: Sony hack: Next Bond movie is WAY over budget

Jolie isn't the only famous name who's been implicated in the hacking scandal. In another leaked email, comedian and actor Kevin Hart was called a "whore" by one Sony exec for wanting more money to promote a movie on social media beyond the $3 million he was receiving for the project.

On Instagram on Thursday, Hart appeared to respond to the PR nightmare, telling his fans that he knows his worth.

"I look at myself as a brand," Hart said, "and because of that, I will never be taken advantage of."

The fallout from Sony's leaked messages has even reached into politics, as one of Pascal and Rudin's leaked email exchanges included controversial jokes about President Obama.

Pascal, who was set to attend a breakfast with the President and other Hollywood executives, emailed Rudin to get his opinion on what she should ask Obama.

"Would he like to finance some movies," Rudin responded.

Pascal emailed back, "I doubt it. Should I ask him if he liked ('Django Unchained')?"

"12 YEARS," was Rudin's response, setting up a back-and-forth in which the two threw out movies starring African-Americans.

When Pascal suggested that maybe it's Lee Daniels' "The Butler" that the President would be partial to, Rudin responded, "Ride-along. I bet he likes Kevin Hart."

Suffice it to say the fallout has not been pretty. Both Pascal and Rudin have apologized for their remarks about Obama, and Pascal has reportedly reached out to leaders like Al Sharpton and the Rev. Jesse Jackson with a desire to "accept responsibility" for her comments.