Editor's note: CNN teamed up with The Center for Investigative Reporting to examine the licensing of armed security guards. During a yearlong investigation, we examined training standards for armed guards in all 50 states, and conducted dozens of interviews with regulators, security company owners, trainers and guards.

But armed security guards, on patrol at all hours throughout the United States, have lax training standards and haphazard oversight.

While a manicurist in California must complete 400 hours of training to be licensed, an armed guard gets authorized after 54 hours, including just 14 hours of firearms training.

In 15 states, no firearms training is required at all.

And incidents involving armed guards -- perhaps accidents or caused by ignorance -- can be deadly.

In Nevada, a guard fired his gun into the air outside a rowdy teen dance. When the bullet came down, it struck and killed a teenage bystander.

And in Colorado, which has no statewide training requirements, an armed guard at a high school agreed to drive a student home. When he handed the student his gun to put away, it went off, firing a bullet through the student's leg.

A yearlong investigation by CNN and The Center for Investigative Reporting found there are no federal training standards for armed guards and no national database of how many shoot or misuse their guns.

The backgrounds of those allowed to work in armed security are also varied. The CNN/CIR investigation found armed guards with criminal records for domestic violence, drug and alcohol offenses and even revealed former law enforcement officers with serious disciplinary problems who found new careers in security.

Yet they come under little scrutiny until something goes wrong.

Lukace Shane Kendle is charged with murder in connection with a shooting outside Club Lexx, a Miami strip club also known as Club Rol-Lexx, on June 1, 2012.

He was working as an armed security guard when he saw Kijuan Byrd and Michael Smathers sitting in a pickup in the parking lot. He told police he thought they were "rolling marijuana."

Kendle told police that one of the men shouted that he was going to kill him.

Then, he said, both car doors swung open, and he feared his "life was in danger" as he believed one of the men had a weapon. 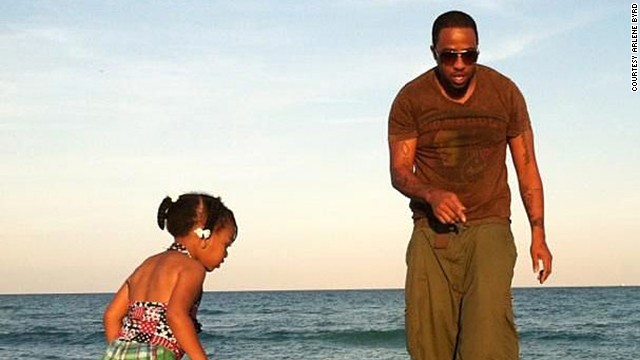 Kijuan Byrd in a family photo with his daughter. He was killed by an armed guard.

Kendle fired at least 12 shots -- eight times at Byrd, including at least four at his back as he crawled under the truck. Byrd was killed. Smathers survived the shooting but was paralyzed. No weapon was found.

In an interview, Smathers said he and Byrd were taking a break from watching a basketball game in the club when they encountered Kendle.

"And basically, we see the security, he sees us and there were no words even exchanged," Smathers said. "We never said a word to this guy at all. The only thing I remember was opening my car door, and him telling me to put my hands up. After that, I was shot."

Smathers said he is now largely confined to his home, watching TV most of the day. 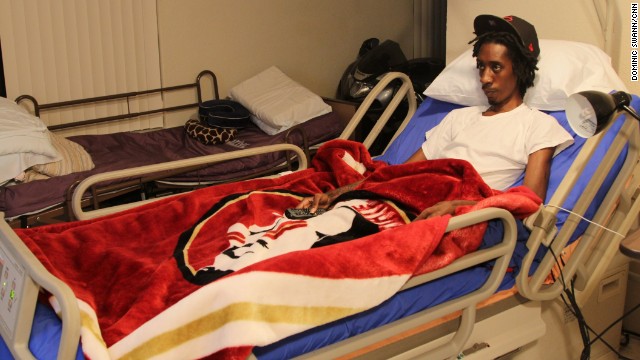 Michael Smathers is paralyzed and virtually housebound, after he was shot by Lukace Kendle.

Donald Byrd, Kijuan Byrd's father, said, "That's a hole in my heart, that's my baby. He's gone; he can't come back. I miss him, I miss him like crazy."

Kendle had convictions for DUI and public drunkenness, but those offenses did not disqualify him from getting an armed guard license in Florida. However, according to records, he failed to disclose that he had been discharged from the Navy for several alcohol-related offenses.

Belgrave Arellano, the owner of Force Protection Security, the company that hired Kendle, declined repeated requests for an interview. Arellano's attorney, Doug Jeffries, said Kendle had all the necessary training and background checks when he was hired. 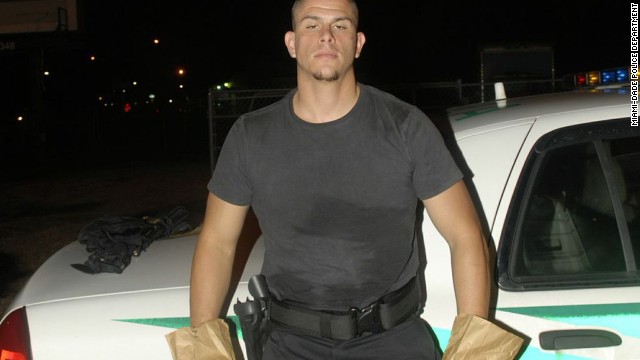 Kendle, who pleaded not guilty, has been deemed unfit to stand trial.

While mental health evaluations are standard for police officers, only four states require them for armed guard applicants. Florida is not one of those states.

Kendle's mother, Cris Kendle, denied he had any mental issues before being put in jail, during which time she says he was beaten by other inmates and put in isolation.

"He's had to have stitches on his face, they had to put him in isolation for longer than 15 months -- isolation. Nobody stays normal in isolation at that amount of time," she said.

If questions could have been raised about Kendle becoming licensed as an armed security guard, they could have been shouted about former armed guard Joshua Kosatschenko.

In his case, poor government oversight allowed someone who was prohibited from carrying a gun to get a license to be an armed security guard.

The CNN/CIR investigation found that 27 states do not check whether a potential armed guard is banned by federal law from carrying a gun.

Kosatschenko was a "prohibited possessor" -- meaning he may not carry a gun until he is at least 30 because of a juvenile record that included an aggravated assault with a deadly weapon when he was 13.

But Arizona did not check the federal database before approving the license request of Kosatschenko, then 19. Nor did the state look for Kosatschenko's juvenile record, one that he had neglected to disclose. Capt. Steve Enteman, the head of the compliance and information services bureau of the Arizona Department of Public Safety, said they could have checked the juvenile record if Kosatschenko had disclosed it.

Six weeks after getting his license in 2009, Kosatschenko was guarding a convenience store in Tucson. He and another security guard ran outside after three shoplifters who had stolen food. There was a scuffle, and Kosatschenko shot through the window of the getaway car where Daniel Tarango was waiting for his friends, police and court records show.

Tarango, who unarmed and 18 at the time, ended up paralyzed and in a wheelchair. 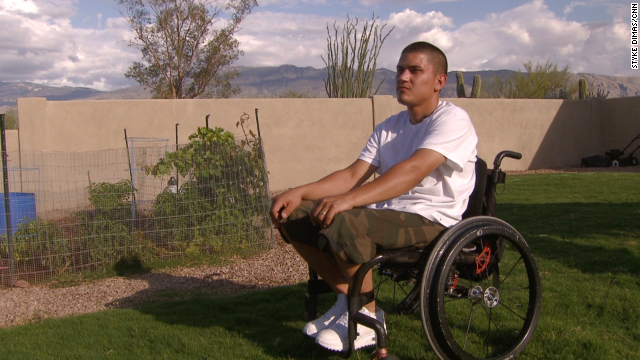 Daniel Tarango was left paralyzed after he was shot by an armed guard who should not have been licensed.

Kosatschenko was initially arrested for attempted murder. But that charge was dropped, and he was ultimately indicted and convicted of violating the law that banned him from possessing a gun. He served probation and maintained in court documents that was justified in the shooting.

After the shooting, Arizona added a box to the security guard form, which now asks whether the applicant is a prohibited possessor. However, Enteman acknowledged that Arizona still does not check that database.

We want to make sure this guy... is not going to be a problem himself.
Steve Amitay, National Association of Security Companies

Tarango is now 23. He makes no excuse for being at the store that day but said he still can't believe he almost got killed over stealing some food.

"I have post-traumatic stress disorder. You know, since that happened, I always feel like when I'm driving, that someone is going to try to open up my door and pull me out of my vehicle," Tarango said.

There are some calls for tougher standards. Steve Amitay, a lobbyist and general counsel for the National Association of Security Companies, wants at least FBI criminal background checks for anyone who wants to be an armed guard.

Armed guards are in a position of trust, he said, and "we want to make sure this guy is properly vetted and is not going to be a problem himself."

Have you had interactions with armed security guards or worked in the industry yourself? Do you think the training and oversight work? If not, why not? Tell us in the comments below.

Got a tip about something CNN should investigate? Let us know.