Part of complete coverage on
Future of Travel

You're flying with NASA and you don't even know it 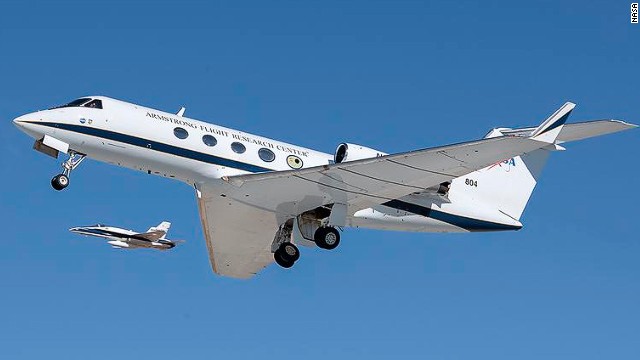 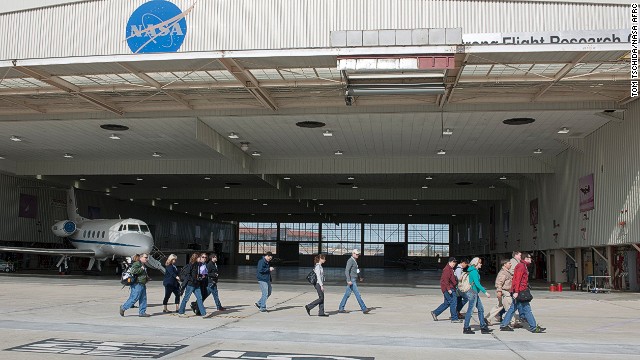 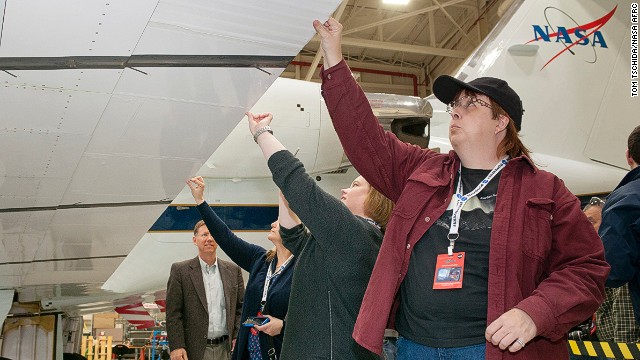 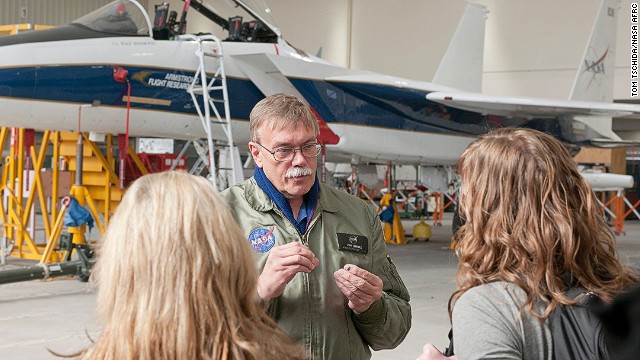 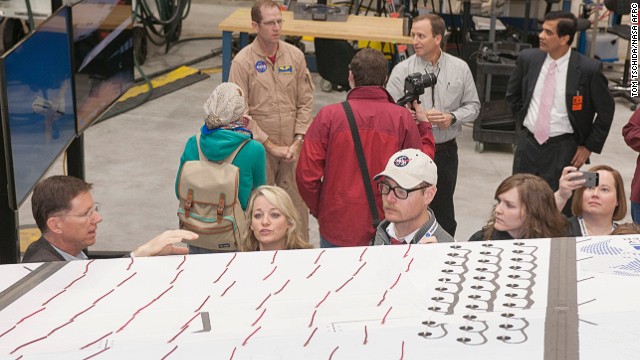 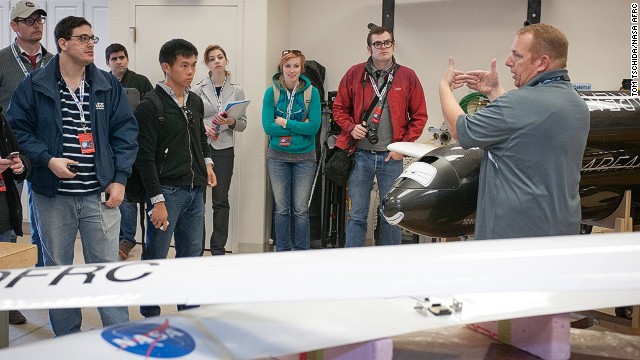 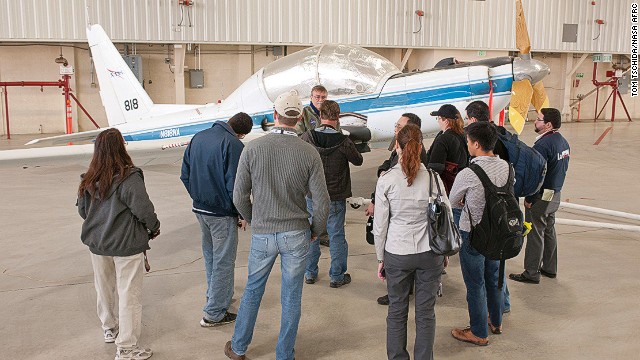 Grindle shows off a YO-3 support research aircraft. The plane is recognizable due to its slow-speed wooden propeller and long wings. 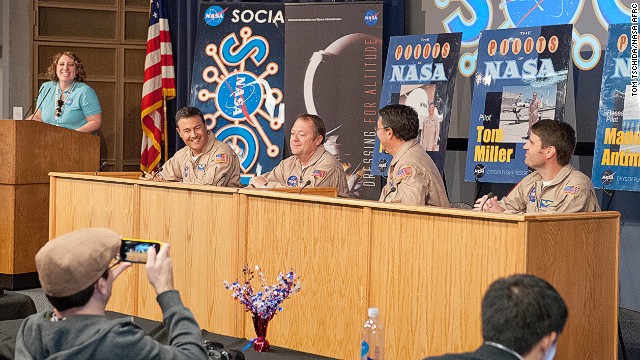 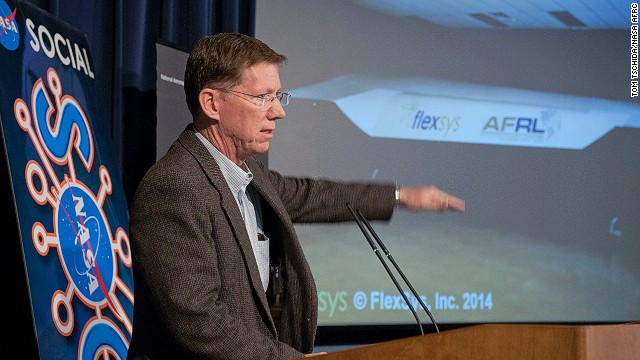 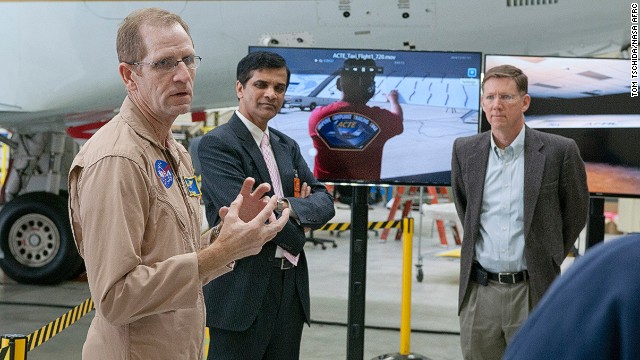 (CNN) -- You know those little "winglets" that point up from the tips of airliner wings?

Those were developed by NASA.

And, you know those little grooves in runways that channel away standing water?

It also develops ways to make our airliners safer and more efficient.

Guess what? You may have been flying with NASA technology for years, and didn't even know it.

Now, an ongoing project could radically change the way airliners look and, more importantly, save hundreds of millions of dollars a year in fuel costs.

Those words sound like science fiction, but NASA and a company called Flexsys are developing wings that change shape in response to flight conditions and weather.

What does that mean to air travelers?

You've probably looked out the window of an airliner to see the hinged metal flaps on the rear edge of a wing.

They got an exclusive look at NASA's flexible wing project and other ongoing research aimed at aviation. They also got a chance to hang out with engineers and pilots.

Then, they tweeted about it.

At the ACTE test aircraft #flyNASA #NASASocial There must be a lot of seats in there, can we go fora ride? PLEEEEESE? pic.twitter.com/i4a0ZipPMf

Project manager Tom Rigney compared the flexible wings to "watching a bathtub bend. You don't expect something shaped like that to bend into a very fluid looking shape."

If these new wings end up on airliners in the coming decades, they'll transform our flying experience into smoother, more comfortable and less expensive journeys.

But don't expect them until after 2025, said Rigney.

So, the big question about the flexible wing is pretty simple: How does it work?

That's a proprietary secret. NASA is prohibited from telling us.

But here's what the NASA engineers could say: It morphs to compensate for changing flight conditions.

In the future, "a pilot could be flying through a strong gust and the wings adjust so passengers won't feel the forces of the gust," Rigney said.

It could change the way engineers design airliner wings.

"Now we have wings that are made heavier to withstand gusts, but with this technology, they may not have to design heavy wings like that anymore," said Rigney.

A three-member crew of a heavily modified NASA Gulfstream III has been flight testing this new wing material.

Inside the cockpit sits a mascot: a little stuffed animal named Scrat, the prehistoric squirrel character from the film "Ice Age."

NASA loves its acronyms, so Scrat has been defined as the "SubsoniC Research Aircraft Testbed."

The test flights climb to around 40,000 feet and accelerate to about 75% of the speed of sound.

Never far away is a chase plane, in case an issue comes up and they need an exterior set of eyes on the wings.

Right now, the wing is adjusted before each flight, not while airborne.

Once this test program is complete, the next step would be to design a new wing.

"I would think that wing would be moveable in flight," said Williams, "and it will make a big difference."

Someday this new wing technology may join the list of NASA innovations that have made air travel safer and more convenient.

Airplanes now have sensors that can predict it while in flight.

In the 1980s and '90s, NASA conducted wind shear research and validated the technology surrounding the sensors.

Older airliners used heavy cables and pulleys to connect the cockpit controls to the wings and tail.

Now, thanks to NASA research in the 1960s and '70s, pilots control newer airliners via electronic wire-based systems.

Airliners are safer from lightning strikes now, due to NASA research during the 1970s and '80s.

What NASA learned has helped protect airliner avionics and electronics from damage by lightning strikes. 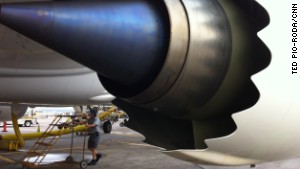 Chevrons -- serrated shapes on the rear edges of the nacelles, the jet engine housings -- cut noise in the cabin and on the ground.

These were developed thanks to NASA computer simulations in the 1990s and 2000s.

Vertical extensions developed by NASA during the 1970s and '80s led to airliner "winglets," which allow planes to slice through the air more efficiently, saving fuel and money.

It won't be a banner year for major announcements, but there are still aviation developments to keep an eye on.
The perfect gift? Old Boeing 747 seats
updated 4:50 AM EST, Mon December 22, 2014

Could there be anything better than reclining on an airplane seat in the comfort of your own home?
Singapore's Jewel Changi
updated 4:42 PM EST, Tue December 9, 2014

Construction begins on a new Singapore airport complex that could make delays and layovers a pleasure.
An end to the battle for the armrest?
updated 3:09 PM EST, Wed December 10, 2014

Soarigami says its foldable plastic divider will increase in-flight harmony when it goes on sale in 2015.
The golden age of travel
updated 1:08 PM EST, Wed December 3, 2014

Good news for air travelers passing through Manila: the city's international airport isn't quite as bad as it used to be.
Annoying things people do in airports
updated 9:11 AM EDT, Tue October 7, 2014

This aging cargo work whale makes more than 60 flights each week, carrying parts for all of the Airbus programs.