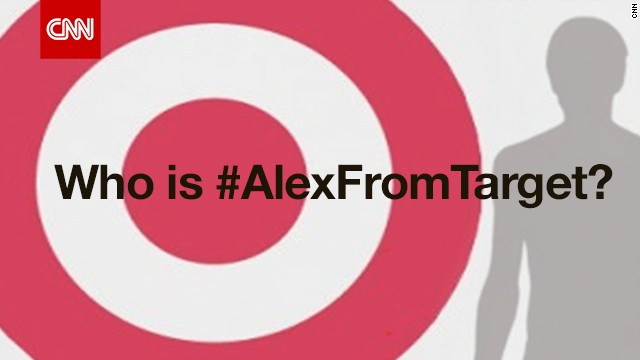 (CNN) -- If you woke up this morning, looked at Twitter and wondered, "Who the hell is Alex from Target?" you're not alone.

If you've been awake for a couple hours and are still wondering why #AlexFromTarget is trending ...

Please don't ask us to explain the Internet.

According to Urban Dictionary, Alex from Target is "a hardcore pimp who recently gained fame as an Instagram sensation for reasons beyond the comprehension of any sane person."

For the record, we don't think Alex is actually a pimp.

He seems to be a nice kid who works at Target who became famous after Twitter user @brooklynjreiff posted a photo of him in his uniform on October 26.

It was re-posted several times over the next few days, and then suddenly, as these things go, the Internet was hooked.

And many pieces of disturbing fan fiction.

Several people have noted Alex from Target's resemblance to Jake from State Farm (which, by the way, was a very popular Halloween costume this year).

THIS IS SO HILARIOUS OMFG 😂😂 PEOPLE WORK FAST #alexfromtarget pic.twitter.com/E7PXka4a1L

Am i famous now?

If the sweatshirt in his profile photo is any indication, he's from Texas. And that's about all we know about him. We'd love to know what his girlfriend -- or his mom, for that matter -- thinks of all this. (If you're reading this, contact me @jdwilson2.)

We imagine the executives at Target are already dreaming up ways to cash in on this little meme.

But if they know anything about the teenage attention span, they know they have to work fast.

ok ok stop with alex from target now its long over

Let's get back to work, shall we?