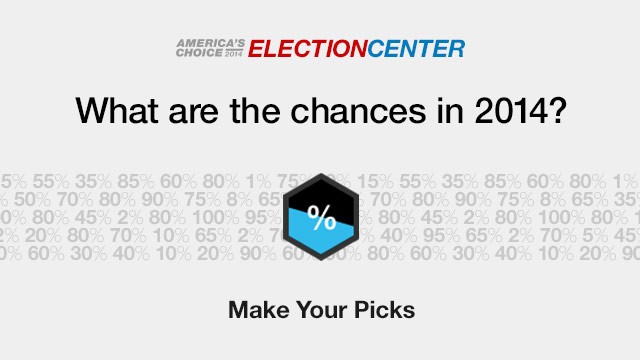 Washington (CNN) -- Republicans' chances of winning control of the Senate in Tuesday's midterm elections are now up to 95%, according to CNN's Pivit, an analysis that combines experts' projections with political watchers' predictions on key races.

The jump was driven largely by a Des Moines Register poll over the weekend that put Republican Joni Ernst 7 percentage points ahead of Democrat Bruce Braley in a Senate race seen as a must-win for Democrats.

In that race, Pivit puts Ernst's chances at 88%. Pivit also offers bad news for Democratic Sen. Mark Udall in Colorado, whose chances are at just 6%, and Sen. Mark Pryor in Arkansas, who's down to 2%.

Pivit's analysis suggests Democrats are in better shape in North Carolina, where Sen. Kay Hagan has a 69% chance of holding off Republican challenger Thom Tillis, and in New Hampshire, where Sen. Jeanne Shaheen's chances of beating Scott Brown are up to 81%.

Republicans, meanwhile, look to have put Kentucky's Senate race out of reach. Senate GOP leader Mitch McConnell's chances of surviving a challenge from Democrat Alison Lundergan Grimes are up to 97%.

Republicans need a net gain of six seats to capture a majority. Pick-ups in Montana, South Dakota and West Virginia are all but assured, and Democratic incumbents are facing uphill battles in Alaska, Arkansas and Louisiana, as well.

Republicans are also hoping for wins in states like Colorado, Iowa, New Hampshire and North Carolina -- which would help solidify their chances of gaining a majority by providing insulation in case the GOP loses seats of its own in Georgia and Kansas.