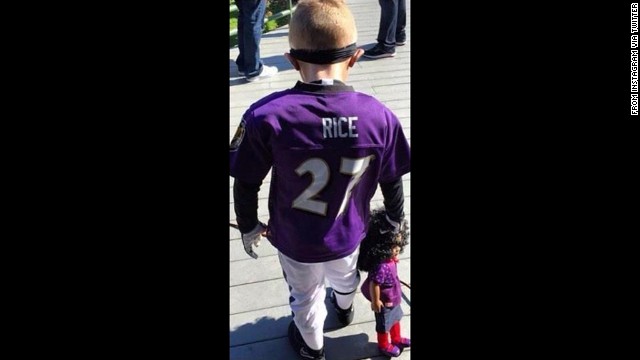 A photo emerged on Instagram of a child wearing a Ray Rice costume and dragging a doll. Who thought this was OK?
STORY HIGHLIGHTS

Editor's note: Kelly Wallace is CNN's digital correspondent and editor-at-large covering family, career and life. She is a mom of two girls. Read her other columns and follow her reports at CNN Parents and on Twitter.

(CNN) -- There aren't too many times when I'm speechless about what I consider an outrageous example of parenting. This is one of those times.

An Instagram photo surfaced over the weekend of a child wearing a Ray Rice costume and dragging a doll ostensibly meant to symbolize the wife of the embattled former NFL star, Janay Rice. (The person who posted the photo with the caption "Greatest costume ever" appears to have since taken down their Instagram account.)

As most of us sadly know by now from the surveillance video that has been seen around the world, Rice dragged his then-fiancee out of an elevator after knocking her out in February. And so a kids' costume of Rice dragging his wife?

Are you kidding me?

Is this Halloween costume offensive?

Thankfully, some parents across the country have the words I can't seem to find.

Halloween costumes to avoid this year

"Utterly disgusting!" is what Mike Heenan, a father of two young daughters and organizer of the SF Dads Group, called "the seemingly celebratory suggestion of domestic violence in dragging around a Janay Rice doll."

"Not just insensitive. Idiotic! Dangerous! Disgraceful!" said Heenan, who is also the founder of the blog At-Home Dad Matters.

On Facebook, Alison Bucalo, a mom of two boys in Ridgewood, New Jersey, said she would never let her little guys wear something "so tasteless."

"What's the purpose? To be funny? To shock? To show zero class? What is the lesson here?" she asked.

This Ray Rice costume for kids is just the latest example of what seems to be a trend in wildly inappropriate children's Halloween costumes, with selections ranging from meth dealers Walter White and Jesse Pinkman from TV's "Breaking Bad" to a baby cigarette to serial killer Hannibal Lecter.

On the video-sharing site for tweens called KidzVuz, a girl who goes by the name "citykid" was horrified to see costumes such as a "terrorist" and a "little Hitler."

"People actually made these for their kids to wear," she said incredulously. "Just because it's Halloween that doesn't mean you can cross these kinds of lines."

She also pointed out the growing popularity of oversexualized costumes for our girls. "By making these costumes manufacturers are encouraging tween girls to dress twice their age."

Melissa Atkins Wardy, a mom of two and author of "Redefining Girly," said it is "especially concerning" when hypersexualized costumes "dominate the girls market."

Pink, princess-y and sexy too soon

"It reflects a litmus test of our society and conveys the message to girls they are valued for their looks," said Wardy, who is also the founder and chief executive officer of PigtailPals & Ballcap Buddies, which offers empowering T-shirts for girls and boys. 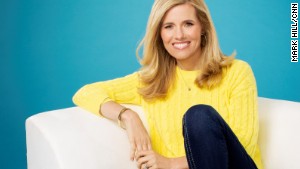 CNN's Kelly Wallace was speechless about the Ray Rice children's Halloween costume and the message it sends.

"Instead of dressing like a true fire fighter/super hero/doctor/bug/witch, they face row after row of the sexy version of those things, size 5T," Wardy said. "While a little girl may not understand what 'sexy' is, the older children and adults around her certainly do, and it impacts the way we talk to and respond to girls."

Pam Moore, host of the blog Whatevs, said she's seen costumes such as a "sexy mermaid" or a "sexy Starbucks beverage" for children on Pinterest.

"Basically, anything that could be described as 'sexy' is inappropriate for a young girl," said Moore, who blogs about motherhood, fitness, home birth and life in Boulder, Colorado.

As for how a parent can draw the line between what's inappropriate and what's OK for children to wear on Halloween, Moore, in my humble opinion, had some great advice.

Do you think the child costume of Ray Rice dragging a doll is inappropriate for children? Tell Kelly Wallace on Twitter or CNN Living on Facebook.