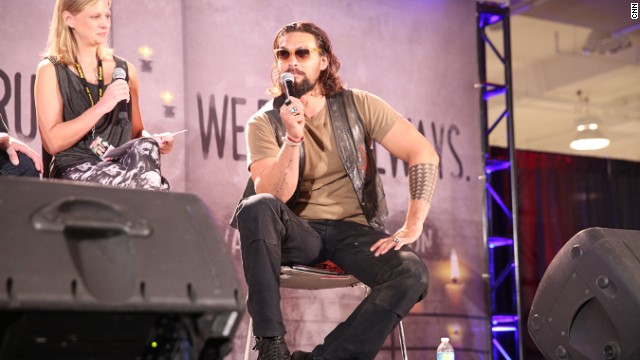 (CNN) -- Jason Momoa's audition tape for "Game of Thrones" is an impressive piece of work.

The actor gave a breakthrough performance as Dothraki leader Khal Drogo in the first season of "Game of Thrones," and a 35-second audition tape proves that he was pretty much born to play the part.

A 2012 YouTube clip of the audition, resurfaced by Time, shows Momoa giving a captivating performance of a haka, a traditional dance done by the Maori people of New Zealand.

Momoa was born in Hawaii, but the actor told New Zealand's Stuff last year that he feels a kinship with the Maori.

"We come from the same (Polynesian) culture," he said. "When I found out more about the Maori culture, I fell in love with it and with the people, too."

To win the part of Khal Drogo, Momoa wanted something powerful and irresistible to watch -- and haka fit the bill on both counts.

"It's very, very powerful, and I wanted to capture that," the actor told Stuff. "I just thought it was apt for the role because it's beautiful and scary."

Unfortunately, Momoa's imposing Drogo didn't last long in the "Game of Thrones'" world, but with at least one flashback planned for the upcoming fifth season, fans can always hope to see his character again.

In the meantime, there's Aquaman. Warner Bros. has confirmed rampant rumors that Momoa will play the hero in 2016's "Batman v Superman: Dawn of Justice," in addition to getting his own Aquaman movie in 2018.

At the Walker Stalker Con in Atlanta over the weekend, Momoa was finally able to talk about landing the huge role.

"As a Polynesian, our gods are tied to water, so this means something special," Momoa said. "I'm very excited to be a part of ('Batman v Superman'). Zack Snyder is a genius."