(CNN) -- Hunger isn't glamorous, but Michael Kors and Halle Berry are using the power of fashion and Hollywood to help the U.N. World Food Programme provide meals for children around the world.

Thursday is World Food Day, but the celebrities are rallying support all month long to raise funds for WFP's School Meals program with the #WatchHungerStop campaign.

The issue of hunger has been an important one for designer Michael Kors for decades. He started his charity work in New York in the late 1980s with God's Love We Deliver, a nonprofit organization that provides nutritious meals to seriously ill people. 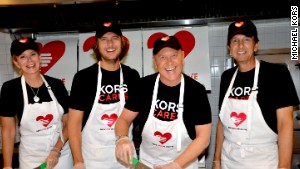 And as the Kors fashion empire grew so did the designer's mission.

Kors started the #WatchHungerStop campaign with the World Food Programme in early 2013 and brought on Berry a few months later.

"She's a great mother, a terrific human being and a great actress. She is very glamorous also," Kors says. "She does the whole thing and makes it look effortless. We want to spread the word that anyone can make a difference."

As of July, #WatchHungerStop has provided 5 million meals to children, and Kors says the campaign wants to continue to "make some more noise" about hunger. 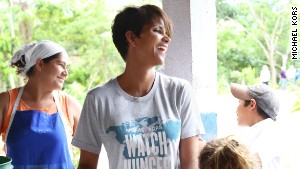 "There's joy, real joy, because these kids are full of joy," Berry says of the children she saw in Nicaragua.

Over the summer, Berry visited a WFP site in Nicaragua, the second-poorest nation in the Americas.

Children seemed to be the driving force behind Berry's journey to Central America. There, she saw firsthand how the WFP's School Meals program works in an area suffering from a failed coffee crop.

"It was incredibly moving,'' Berry says in an e-mail forwarded to the WFP. "It's hard to describe the mix of emotions you feel -- sadness, certainly, to sit and talk with children who don't get the nutrition they need to grow. But also respect and admiration for their families and communities, who do so much for them."

Berry appears to be inspired by her visit. 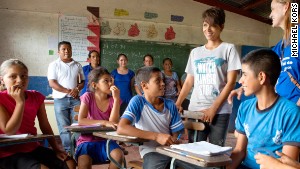 Berry visits a school in Nicaragua, where the World Food Programme gives children a meal and a chance to learn.

"There's a great sense of hope, because this is something that's working. And then there's joy, real joy, because these kids are full of joy," says the actress, who has two children.

"Halle was very humble, very quiet and really came to learn. She was visibly touched by seeing the poverty firsthand," says the WFP's Bettina Luescher, who traveled with the star to Nicaragua.

Making a difference with $5 and a watch

Kors and Berry have helped tremendously with the #WatchHungerStop campaign, according to the World Food Programme.

"They are so creative and have such fantastic ideas. Not only do they fund-raise ... but they have brought massive awareness in the fight against world hunger," Luescher says.

That creativity starts in a Michael Kors store with the 100 Series watch. For every watch sold, 100 meals are donated to the World Food Programme.

There's not just one way to fight hunger. Join us, wherever you are: http://t.co/G7rOIbWe1c #WatchHungerStop pic.twitter.com/KPk72QSdkJ

In addition to the watch, $5 is a common theme for the campaign. According to the World Food Programme, $5 feeds a child for a month. People can donate $5 at a Michael Kors store register or text MKHUNGER to 50555 to donate $5.

On Thursday, you can visit a Michael Kors store and get a free Watch Hunger Stop T-shirt. Take a selfie in the T-shirt and post it using the hashtag #WatchHungerStop between Thursday and October 31, and 100 meals will be donated to the World Food Programme.

The money raised by Kors and Berry goes toward providing school meals. When families in developing nations fall on hard times, children, especially girls, drop out of school to work and help out. School meals help encourage poor families to send children to school and keep them there.

Most of the money raised by the WFP goes for emergency work in places such as Syria, Iraq as well as in more than 70 other countries. The WFP also helps provide food to people in West African countries hard hit by the Ebola crisis.

"We want to see zero hunger in the world ... so we still have a ways to go," says Michael Kors. "I think you can be optimistic; you can have fun; you can be compassionate, and you can be chic all at the same time."

For ways you can join the fight against hunger for World Food Day and every day, go to CNN.com/impact.