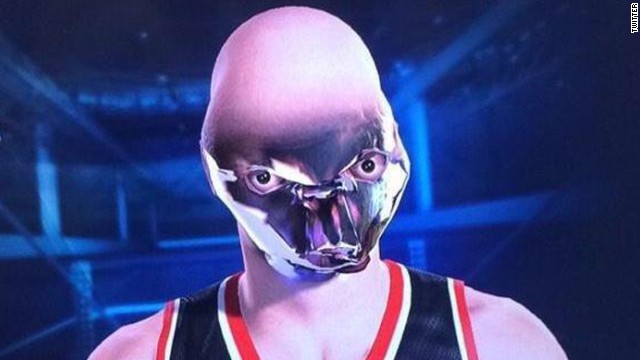 A face-scan feature on "NBA 2K15," released Tuesday, has led to horrifying images when players botched the scans.
STORY HIGHLIGHTS

(CNN) -- With Halloween just a few weeks away, "NBA 2K15" is here with a whole new set of mutant horrors to populate your nightmares.

On Tuesday, the latest entry in 2K's massively popular pro basketball video-game series was released to rave reviews and crowds lining up for midnight release events.

One of the game's coolest features is a new face-scanning system that, on Xbox One and PlayStation 4, uses the console's camera to let you make a 3-D model of your face and create a custom character to play.

Except, well ... except that, sometimes, you get this:

They said that my player would look like me. Damn are they saying something pic.twitter.com/Fq9TAfWEby

Clearly, some players were having trouble with the scanning process.

And, to the delight and sheer terror of the Internet, the results often ended up looking like something out of "The Toxic Avenger" or "Hellraiser."

The scan requires players to get very close to their camera and then rotate their head slowly over the course of about 30 seconds. In 2K's gaming forums, several threads popped up with players complaining about the glitch.

So @vdubali and I tried the NBA 2k15 FACE SCAN and here are the results. Me Left her Right pic.twitter.com/LDICOoaEOW

Others who had experienced similar trouble were offering advice. The most frequent suggestion was to open windows to let in natural light when conducting the scan.

Gamers on social media were, of course, having a ball with the freak show.

"Man, that new 'Silent Hill' is really shaping up," wrote Max Scoville, of gaming video channel Destructoid, referring to the classic horror game. "Unclear why they're calling it 'NBA 2K15.' "

And not all surprising face-scan results were of the soul-crushingly ugly variety.

The folks over at SB Nation scanned Pepper, one of their reporters' dogs, and in our opinion, she looks ready to hit the hardwood.

We scanned a dog into NBA 2K15. Not bad! http://t.co/UYcOVDZFiF pic.twitter.com/uLBWQ58vDk