(CNN) -- Young people are notorious for their political apathy, but activists hope a new online video will make them turn out to vote as much as they "turn up" on Friday nights.

The 3½-minute video features celebrities like Lil Jon, Lena Dunham and Whoopi Goldberg, some of whom are dancing to "Turn Out For What," a parody piggybacking off DJ Snake and Lil Jon's 2013 single, "Turn Down For What." The comedic video highlights issues often important to young people like LGBT rights, student debt and climate change.

"There are over 130 million people that watched the 'Turn Down For What' video on YouTube, and our goal is to make voting as popular as the song," said Rock The Vote spokeswoman Audrey Gelman, noting that the single had broad appeal, earning top spots on dance, hip hop and pop charts.

"We love the idea of turning a party anthem into an anthem for civic engagement," she said.

Gelman acknowledged that voter turnout is "always an uphill battle" during midterm elections when there aren't presidential candidates on the ballot, but said that a downtick is to be expected for all voters, not just the youngest cohort.

In the video, each celebrity shared what issues they care about in an attempt to inspire younger voters to latch on. 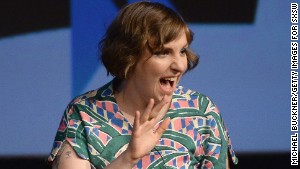 Lena Dunham speaks at South by Southwest on March 10, 2014, in Austin, Texas.

"My name is Lil Lena, and I'm turning out for reproductive rights," said Dunham, who is also seen chatting with Lil Jon inside a voting booth.

Others featured in the video had a more humorous take.

Lil Jon said he's "turning out" for marijuana legalization before taking a toke from what looked like a massive joint.

"I'm Fred and I'm turning out because I want to impress my friends. That's the only reason to ever do anything," said actor and comedian Fred Armisen.

The video was organized by Rock The Vote, a nonpartisan activist organization founded in 1990 working to "mobilize the millennial voting bloc," according to its website.

Only 45% of young people age 18-29 cast a ballot in 2012, nearly 20 percentage points below the national average, according to the Center for Information and Research on Civic Learning and Engagement. That same year, voters under 30 chose President Barack Obama over Mitt Romney by a substantial 23-point margin. Many of the celebrities in the video, including Dunham, Goldberg and Lil Jon have supported Obama in the past.