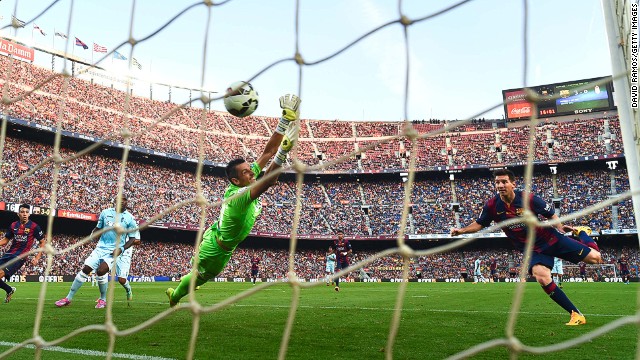 (CNN) -- It's a landmark that most players can only dream of, but for Lionel Messi it was just a matter of time.

In a career already groaning under the weight of milestones, Messi duly passed another one on Saturday scoring his 400th goal for club and country as Barcelona smashed six unanswered goals past Granada at the Nou Camp.

The landmark strike came in the 61st minute of the match -- heading in Dani Alves' volleyed cross -- to put Barca 4-0 up after a goal from Ivan Rakitic and two from Neymar had all but wrapped up three points before the break.

Neymar completed his hat-trick in the 66th minute before Messi tucked away his 401st career goal late on to complete the rout and seal Barca's biggest win in La Liga this season.

Messi, still only 27 years old, has now scored 359 goals in competitive matches for Barcelona and 42 for Argentina.

"I never imagined I could achieve anything like this in my career," Messi said on his official Facebook page.

"Thanks for all the congratulations on scoring 400 goals with FC Barcelona and the Argentinian National Team. I'll continue working hard to reach more targets," he added.

Barca manager Luis Enrique was quick to heap praise on his midfield maestro.

"I don't think if we added together the goals we have scored on the playground it would reach 400," Enrique said after the match.

"Messi is someone who has been touched by a magic wand and he is desperate to enjoy playing football."

The four-ton mark was passed by his La Liga rival Cristiano Ronaldo last January, but the Argentine has bragging rights after reaching the total in just 525 appearances compared to the Portuguese who took 653 games.

As one landmark is reached another substantial record heaves into view as Messi looks to pass Telmo Zarra's all-time La Liga goal-scoring record of 251.

Barcelona's win puts them top of the table with 16 points and a very healthy +17 goal difference -- a stat helped not only by recent high-scoring wins but also by clean sheets in their opening six league games.

Two points behind are last year's champions Atletico Madrid who also romped to victory on Saturday.

Diego Simeone returned to the dugout following a touchline ban to see his team maintain their unbeaten start to the La Liga season with a 4-0 win against Sevilla.

First-half goals from Koke and Saul Niguez put Los Rojiblancos in control before two late second-half goals sealed all three points -- a Raul Garcia spot kick made it three in the 82nd minute before Raul Jimenez made it four in the last minute of normal time.

The win keeps lifts Atletico to second, one point ahead of Valencia who travel to Real Sociedad on Sunday.

City rivals Real continued their recent run of form with a 2-0 win at Villarreal -- Luka Modric and Ronaldo on target for the visitors.

Carlo Ancelotti's side are now level on 12 points with Celta Vigo who beat Elche 1-0 on Friday.

Chelsea march on in EPL

Meanwhile in the English Premier League, Chelsea continue to dominate proceedings this term, picking up a fifth win in six matches with a 3-0 defeat of Aston Villa at Stamford Bridge.

Diego Costa's £32 million ($52 million) price tag is looking increasingly cheap as the Spanish striker netted for the eighth time since joining from Atletico Madrid in the summer.

Costa's 59th minute strike gave Chelsea a two-goal cushion after Oscar had opened the scoring in the seventh minute. Willian scored a third 11 minutes from time to ensure Jose Mourinho's side remain three points clear at the top of the table with 16 points.

Manchester United also won on Saturday beating West Ham 2-1 at Old Trafford to move up to eighth in the table.

Goals from Wayne Rooney and Robin van Persie gave Louis van Gaal's side only their second league win of the season.

Rooney was later shown a red card for a reckless tackle on Stewart Downing and will miss the next three league matches.

The day's two big derby matches ended in 1-1 draws with Liverpool and Everton sharing the points at Anfield while Arsenal had to come from behind against Tottenham Hotspur at the Emirates.