Enterovirus: My son was 'like a goldfish gasping for breath'

(CNN) -- Enterovirus D68 has swept through 30 states since mid-August. What sets the virus apart from many others in the same family is its vicious symptoms: Instead of just causing a summer cold, it sends children to the hospital -- where they often end up in the intensive care unit, struggling to breathe.

David Nash from Tucker, Georgia, is one of those children.

At first his parents, Rachel and Rodney Nash, weren't too alarmed when David came down with a cough, runny nose and low-grade fever. But then the 3-year-old got sick very quickly.

David was in the first wave of children hit with Enterovirus D68. The virus struck early in states such as Georgia, where children headed back to school last month, but it then spread to states such as New York and Connecticut, where school began after Labor Day.

What parents should know

The Nashes shared with CNN the day-to-day story of their son's illness, hoping it might help families whose children have been recently diagnosed with what one pediatrician calls a "frightening" virus. 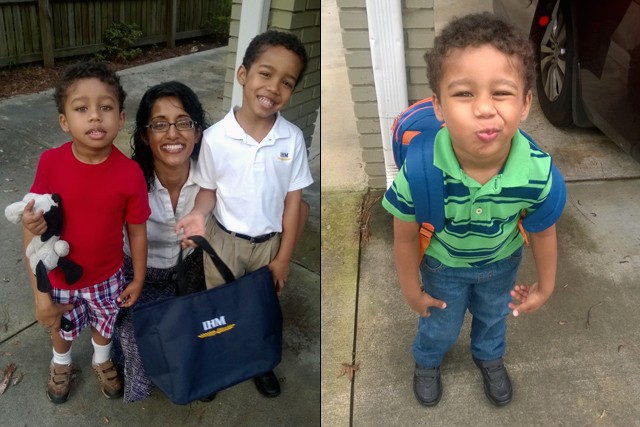 A healthy David and his big brother, Benjamin, start school.

David develops a cough, runny nose and low-grade fever. His parents aren't too worried as it seems like a regular cold.

The Nashes become more concerned. Their little ball of energy who loves flying around the house as Batman doesn't want to play. That night, he wheezes as he sleeps. His parents wake him to give him puffs from an inhaler prescribed for his seasonal allergies.

"You could see him trying to pull the air in," Rachel Nash recalls. "His nostrils flared as he inhaled, and you could see the muscles in his neck and collarbone working extra hard."

Rodney Nash adds, "I remember as a kid my goldfish jumped out of the bowl. That's how he looked to me -- like a goldfish gasping for breath." 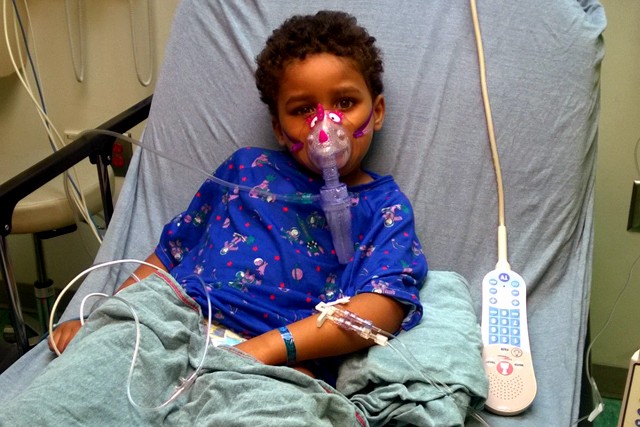 The doctors give David oxygen through his nose. Every two hours he gets nebulizer treatments, which are commonly used to treat asthma, to try to unclog his airways. David hates the mask and isn't cooperative.

David's saturation rate goes up to 88%, but that's not enough. He's admitted to the hospital. 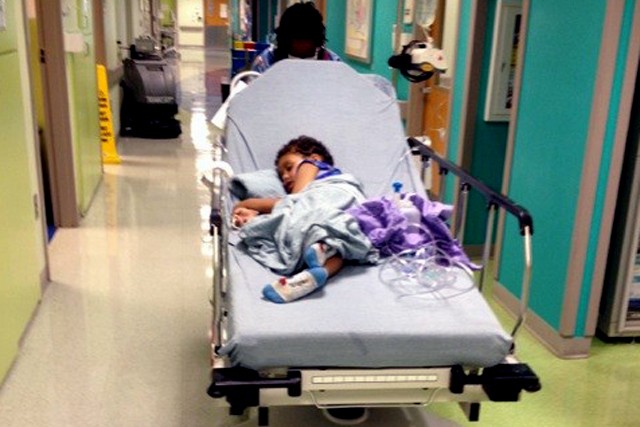 David was admitted to the hospital on August 26.
Courtesy Nash Family

In addition to the oxygen and breathing treatments, David gets an oral steroid to help shrink the swelling in his airways.

Even then, David is still wheezing.

"It sounded like air going through a balloon -- where you pinch the balloon and hear the squeaking sounds," his father says.

Doctors try a "shaker vest." Blasts of air shake the vest, which loosens up mucus caught in the lungs. 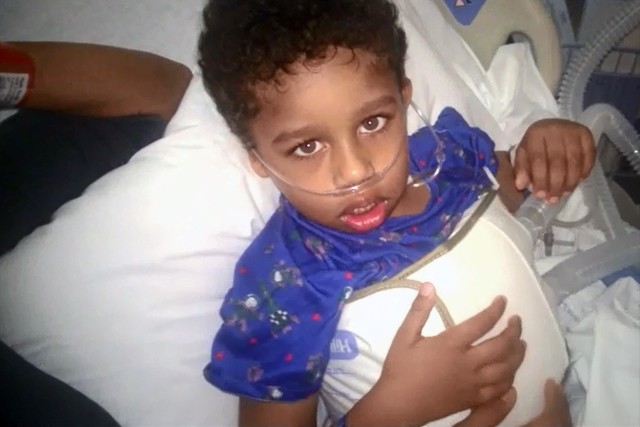 Doctors put David in a "shaker vest," which loosens up mucus caught in the lungs.
Courtesy Nash Family

David does the shaker vest treatment every three hours, but he's still not better.

At 4 a.m., a nurse says David is finally responding to the treatments. His breathing, which had been quick and shallow, is slowing down.

The nebulizer treatments go from every two hours to every four. He still doesn't like them, but he doesn't protest as much as he did before.

At 8 a.m., David is taken off the oxygen and allowed to play. Nurses watch to see if he can breathe OK while riding a bike. If he can't, it means more time in the hospital. 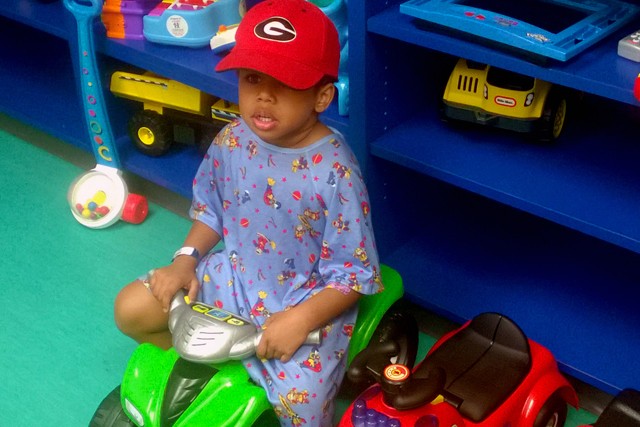 Nurses watch to see if David can breathe OK while riding a bike in the hospital's playroom.
Courtesy Nash Family

David does fine on the bike, and his oxygen saturation level reaches 94% around lunchtime.

He's discharged from the hospital.

For the first two days back at home, David does inhaler treatments every four hours. He wheezes a bit, but he's pretty much back to his old self -- energetic and playful. 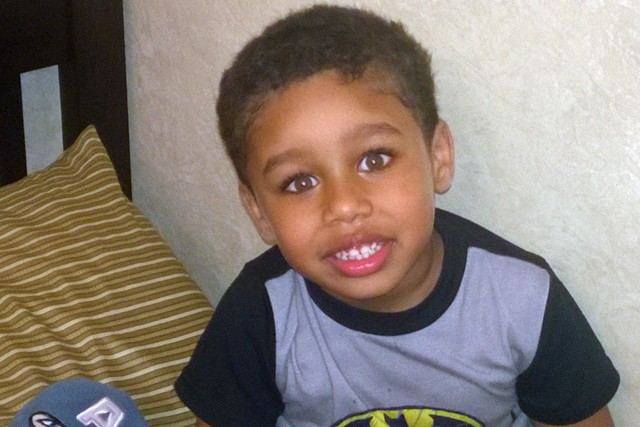 David is back to his energetic and playful self.
Courtesy Nash Family

David has an appointment with his pediatrician, Dr. Betsy John. She gives him a clean bill of health. 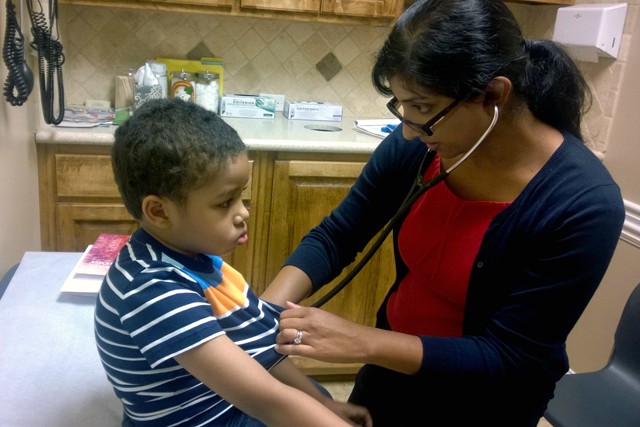 Many children, however, get sick even faster. David was ill for about two days before he had to be hospitalized, but many of Jackson's patients have gone from healthy to severely ill in just a day, and they arrive at the hospital barely able to breathe.

"These kids were really struggling. Many can't even speak a sentence," she says. "It's frightening."

Her advice: If D68 has made its way to your community, and your child has asthma, or even, like David, just a history of allergies or occasional breathing difficulties, call your pediatrician and ask if there's anything you can do to protect your child.

Part of complete coverage on
Cold & Flu Season
Predicting the flu so you can avoid it
updated 6:43 AM EST, Wed December 31, 2014

Imagine being able to predict when the flu might strike your town, a bit like how meteorologists predict when a storm is heading your way.
Flu shot less effective, virus has mutated
updated 11:11 AM EST, Wed December 10, 2014

Scientists are concerned about what they're seeing so far this flu season.
Virus sends hundreds to hospital
updated 5:33 PM EDT, Wed October 1, 2014

Parents are concerned about sending their children to school amid fears of enterovirus D68.
What is Enterovirus D68?
updated 3:33 PM EDT, Tue September 9, 2014

This type of enterovirus is uncommon but not new. We've seen less than 100 cases in the United States since it was identified.
What parents should know
updated 4:50 PM EDT, Tue September 9, 2014

What are the symptoms of Enterovirus D68? When should you take your child to the doctor?
Survive asthma 'epidemic'
updated 7:28 AM EDT, Thu September 5, 2013

Many parents don't realize that the worst asthma day of the year actually occurs in September.
Avoid the 'back-to-school plague'
updated 10:41 AM EDT, Wed August 13, 2014

Flu vaccine myths can confuse people trying to decide whether to get a shot. Here are five common myths.
What to do if you have the flu
updated 7:53 AM EDT, Mon October 14, 2013

Your joints ache, your head feels heavy, you can't stop coughing, you're freezing even as your temperature keeps climbing. What now?
How to avoid catching the flu
updated 5:59 PM EST, Wed January 9, 2013

What do you need to know when it comes to flu germs? CNN's Lisa Sylvester reports.