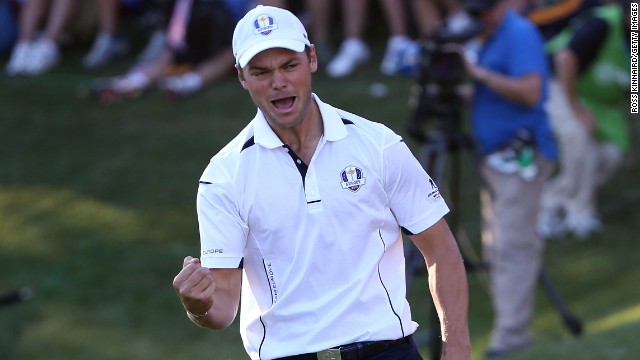 Martin Kaymer was on top of the world after holing the winning putt at the 2012 Ryder Cup. 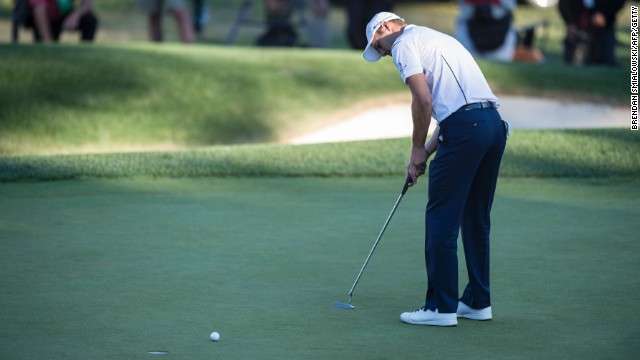 A seven-foot putt was all that stood between Kaymer and Europe in clinching an unlikely come-from-behind victory against the U.S. at Medinah. 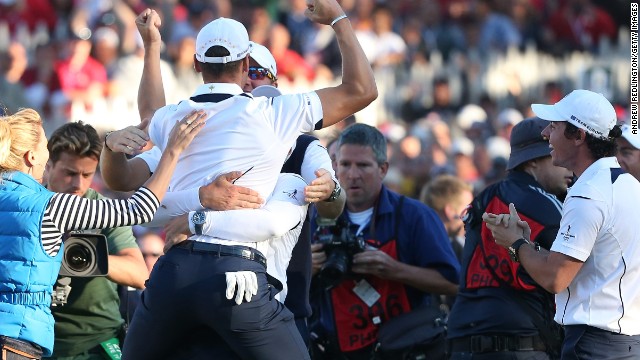 The German was swamped by his jubilant teammates, with Rory McIlroy on his right joining the celebrations. 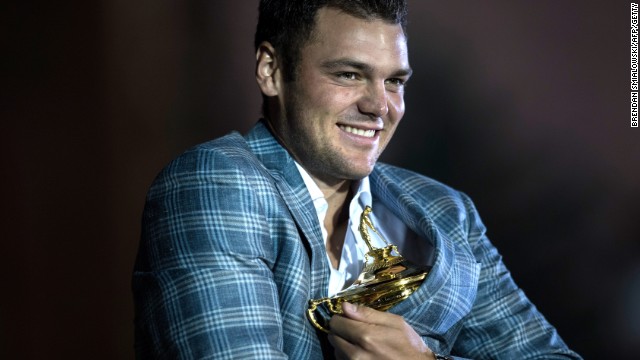 The former world No. 1 had good reason to feel the Sam Ryder trophy might be his own personal property. 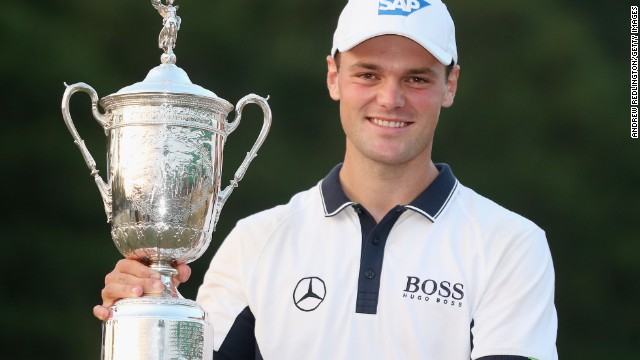 Kaymer claimed his second major title in 2014 by winning the U.S. Open at Pinehurst. 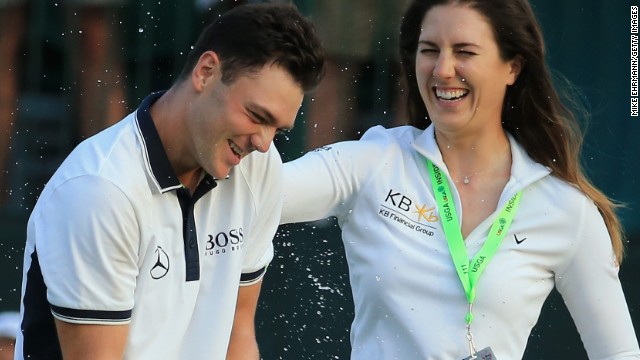 Kaymer is doused with water by fellow German and LPGA star Sandra Gal in June after adding to his 2011 PGA Championship triumph. 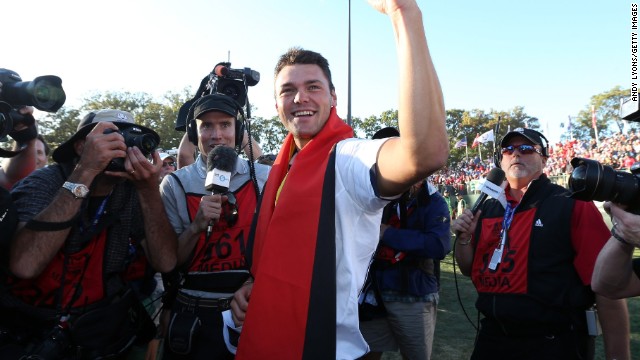 Kaymer's vital part in Europe's 2012 victory left him the center of media attraction at Medinah, and he will be hoping for similar success this weekend at Gleneagles in Scotland.
HIDE CAPTION
Defining moment
Crucial putt
Hero of the hour
Covted trophy
Double major
National hero
Kaymer's Ryder heroics
<<
<

(CNN) -- Millions of golf fans around the world were watching on television with great anticipation. The 18th-green gallery at Medinah Country Club was packed as a remarkable sporting story was about to be concluded.

All Martin Kaymer could think about was getting his phone out and capturing the moment.

"I looked around and thought, 'How nice is that,' to see the big leaderboard and then see the screen which says 'Kaymer to retain the Ryder Cup,' " he tells CNN's Living Golf show.

"I would have loved to take out my iPhone and take a picture of it."

The German stood over a seven-foot putt to win the 2012 Ryder Cup for Europe, which had stunned the U.S. team by making up a four-point deficit on the final day.

His opponent Steve Stricker had already missed his birdie putt to level their crucial singles match, and all the attention switched to Kaymer.

Short of his best form for over a year and feeling he had let down a teammate in an earlier match, Martin Kaymer could have been forgiven for having doubts.

But despite his earlier difficulties, having lost his only other match in that Ryder Cup when paired with Justin Rose in fourballs, Kaymer is adamant that thoughts of failure never entered his mind.

"I mean some people they are scared of that moment and, obviously I can talk like this now because I made the putt, but I was not that nervous."

Sure enough, Kaymer walked confidently forward and stroked home the putt with some aplomb before being mobbed by his teammates.

Europe eventually won 14½ - 13½ to retain golf's most prestigious team competition -- a comeback win that was soon dubbed the "Miracle of Medinah."

For Kaymer it proved a turning point in a career that had seen him win a major and reach No. 1 in the world rankings before a slump in form sent him tumbling down the rankings.

The improvement in form did not happen overnight and 2013 passed without a tournament victory, but having made the decision to campaign full-time on the PGA Tour this year, it was only a matter of time.

Kaymer's purple patch started with a superb victory at May's Players Championship in Florida -- a tournament known unofficially as "the fifth major" -- and then a stunning eight-shot win at the U.S. Open at Pinehurst in June.

The 29-year-old was simply unstoppable as he broke Rory McIlroy's halfway record for the tournament and kept on stretching his lead.

It was his second major after 2011's PGA Championship triumph and confirmation of his talents.

Victory also sealed his place in the European team for September's biennial Ryder Cup match against the United States -- his fourth straight appearance having been a captain's pick by Nick Faldo in the 2008 match at Valhalla.

Kaymer revealed to CNN that Paul McGinley, the European team's skipper for the match at Gleneagles in Scotland, had told him prior to his Players triumph at Sawgrass that he was going to be in his lineup as a pick should he fail to qualify by right.

"He said, 'You don't need to make anything special, just play your game -- show what you can do. Show to yourself and then you will make the team anyways.' And then obviously it turned out to be a great week for me."

With McIlroy claiming the British Open and PGA Championship titles, two members of the European lineup will be have three of this year's four majors between them, but Kaymer knows that the pressures of team golf are completely different.

Life on the road with Martin Kaymer

Should anchored putting be banned?

Kaymer takes to track before Masters

"You see the fans singing songs on the first tee, like at a football stadium, it is just brilliant and we don't really have that usually -- only every two years," he says.

For Kaymer, a football fan who cheered Germany to "one of my proudest moments" as his national team claimed the 2014 World Cup in Brazil, this acts as extra motivation.

"You can't wait to go out there and play with your partner, play for the whole team, play for your continent and obviously play for my country," he says.

"I played football when I was younger and I loved it. I loved that atmosphere, you know, when you play for each other, you fight for the same reason, for the same goal. "

Despite Europe appearing to have the advantage on current form, Kaymer will not be taking anything for granted when the action starts Friday in Scotland.

"I think it will be a battle again -- it was very, very tight the last couple of times. And that is what is so nice about it -- it's not like one team shows up and has no chance against the other," he says.