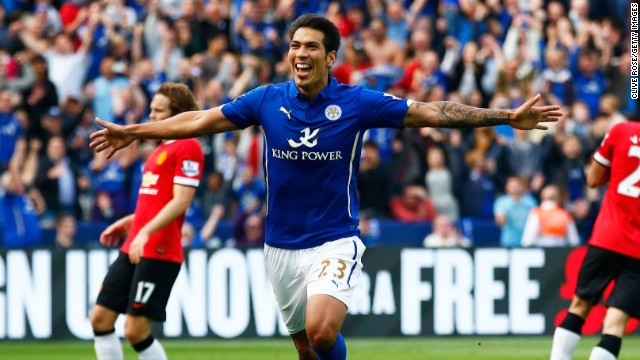 Leonardo Ulloa celebrates his second and Leicester's fifth in the 5-3 victory over Manchester United.
STORY HIGHLIGHTS

(CNN) -- Last weekend Louis Van Gaal was hailing the beginning of a "new era" at Manchester United after a rout of QPR.

Sunday saw a sobering reality check for the Dutchman and his expensively-assembled "galacticos" as the English Premier League powerhouses surrendered a 3-1 lead to lose 5-3 to newly-promoted Leicester City.

It had looked an improbable scenario at the King Power Stadium as United's attacking prowess was on full display with Radamel Falcao setting up Robin van Persie for a headed opener before record signing Angel Di Maria made it 2-0 with a delightful chip.

The first danger signs came after Leicester's new talisman Leonardo Ulloa headed home to reduce the deficit, but when another United summer signing Ander Herrera re-opened the two-goal with a clever back heel, the three points were there for the taking.

But then in Van Gaal's words "we made big errors" and the unheralded home team took full advantage.

Leicester soon leveled as Dean Hammond was allowed time to pick out Esteban Cambiasso to stab past David De Gea.

Juan Mata had come on as a substitute for Di Maria, but he was caught napping by Ritchie De Laet, who found Vardy to put Leicester ahead.

A miserable afternoon for United was rounded off when young defender Tyler Blackett hacked down the rampant Vardy and was red carded.

Ullo beat De Gea from the spot to complete a remarkable reversal and push Leicester up to seventh in the standings.

United, hoping to win Champions League qualification for next season, languishes in 12th.

Van Gaal, who was talking of the Premier League title after the 4-0 win over QPR, must have believed it might be a reality after his side's superb opening.

But he acknowledged that the frailties which emerged in the second half were of his team's own making. "We have too many players who just want to score goals.

"We have to look to ourselves because we made such big errors as a team an personally," he admitted. Leicester manager Nigel Pearson was still pinching himself after the victory.

"At the moment it's difficult to believe.

"Today's result and performance will suggest that on the day we can be a difficult opponent."

Later in the afternoon, there was a dramatic end to the early title showdown at the Etihad Stadium between champions Manchester City and current leaders Chelsea.

City had 10-men after a red card for Pablo Zabaleta and trailed to an Andre Schurrle goal when former Chelsea star Frank Lampard equalized with virtually his first touch of the ball after coming on as a late replacement.

Lampard spent 13 years at Chelsea before joining a new franchise in New York, who then loaned him out to City, and his celebration of the goal was muted.

"I am a little lost for words. I didn't expect to come on and score like that," he told the UK's Press Association.

"I came on and the Chelsea fans were singing, and that's emotional. Then I am playing for this club, who have taken me in brilliantly as well, so I am really stuck in the middle here."

Chelsea still tops the standings by three points from Southampton and Aston Villa after five rounds, but its 100% record was surrendered by the late strike.

On an afternoon of surprises, West Bromwich Albion moved off the bottom with a 1-0 away win at Tottenham Hotspur, while Crystal Palace stunned Everton 3-2 at Goodison Park.

Meanwhile, in the Spanish La Liga, one of Van Gaal's former teams Barcelona maintained its 100% start to the season with a thumping 5-0 win at Levante.

It did not quite match the 8-2 drubbing handed out by arch rivals Real Madrid to Deportivo Saturday, but was Barca's fourth straight victory to take a two-point lead over Sevilla.

Lionel Messi set up Neymar for the opener, but missed a penalty after being fouled by Loukas Vyntra, who was sent off.

Ivan Rakitic, Sandro Ramirez, Pedro and Messi with the fifth completed the scoring.