(CNN) -- Several surveillance videos show her walking and running alone. But police say new footage of a missing University of Virginia student appears to show someone following her the night she disappeared.

Police in Charlottesville, Virginia, have been searching for 18-year-old Hannah Graham since Sunday. On Thursday afternoon, investigators said they were offering a $50,000 reward for "information leading to the cause" of her disappearance.

Her parents say they're worried something happened to her after she left a gathering with friends Friday night.

"Hannah is beyond precious to us," John and Susan Graham said in a statement released by police Wednesday. "We are truly devastated by her disappearance. It's totally out of character for us not to have heard from her, and we fear foul play."

The man in the video later came to the police department and told officers he was following Graham because she looked distressed, authorities said.

He told police he saw Graham with another man, and the two appeared to know each other. On Thursday afternoon, police released a description of that man, who does not appear in the videos, saying they wanted to speak with him.

The teen's mysterious disappearance comes nearly five years after the unsolved killing of another student in the area, sparking fears from some that there could be a connection.

Morgan Harrington, a 20-year-old Virginia Tech student, went missing after attending a Metallica concert in Charlottesville in October 2009. Her remains were found on a farm months later. Police have yet to track down her killer, and her family has long said they suspected there could be other victims.

Could there be a link to the Harrington case?

"If there comes a time where we believe there is a substantive link to those two investigations, we'll share that with you," he said.

So far, the police chief said, investigators haven't found anything to tie the two cases. And they haven't found any sign of foul play, despite the concerns the teen's parents have expressed.

"As a parent, I'd be very concerned, but we don't have any substantive evidence to confirm that," he said. "But you know, they're speaking from their heart."

Police describe Graham, a sophomore, as a straight-A student, an accomplished athlete and a good friend. She's from Northern Virginia.

She's about 5-foot-11 with blue eyes, light brown hair and freckles, the university said in a release asking for tips about the teen's disappearance.

She left a dinner with a group of friends around 11 p.m. Friday. Around 1:20 a.m. Saturday, she sent a text to friends saying she was lost, CNN affiliate WTVR reported.

Police believe she may have been under the influence of alcohol, Longo said, and may have been vulnerable or unable to defend herself.

Investigators have tracked down several surveillance videos that show her that night outside a pub, near a gas station and in a downtown shopping mall, Longo said. But it's not clear where she's going or whether she's in trouble.

One video shows her running along the road near a Shell station.

But in later videos, he said "it does not appear at least at that point that she's being pursued."

Investigators are looking for more surveillance videos that they believe could show Graham in downtown Charlottesville.

They've interviewed 50 people and received more than 100 tips in the case, police said.

And the search is far from over. As time passes, investigators say their search area grows. Search teams from the Virginia Department of Emergency Management are helping, CNN affiliate WVIR reported.

"This investigation has been aggressive and will continue to be aggressive," Longo said. 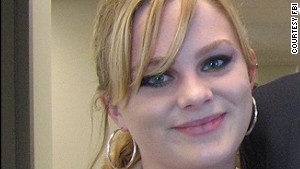 Gil Harrington told CNN affiliate WTVR that it's too soon to draw a direct connection between her daughter's death and Graham's disappearance.

"Your mind goes there, but I think that's premature in a way," she told WTVR. "We have the possibility of having a good outcome with Hannah. We need to keep that in mind."

Right now, Gil Harrington has a poster with pictures of the University of Virginia student on her fridge, beneath the word "MISSING."

Through "Help Save the Next Girl," an organization founded after her daughter's disappearance and death, she's pushing residents of Charlottesville to call in tips.

On Wednesday, the organization tweeted that the Harringtons had left a message in large letters taped on Charlottesville bridge spelled out their support of the search: "PLEASE FIND HANNAH."

"Your mind just sickens," Gil Harrington told CNN affiliate WVIR. "You think, how can it be, another girl taken."

This isn't the first time a woman has gone missing in the area. The disappearances of Harrington and Graham, along with several other past cases in the area known as the Route 29 corridor has given the area an "infamous reputation," WTVR says.

"I don't know. Either there is a commonality or a crime spree," Harrington told WTVR. "We have long passed a critical mass that needs looking at. If you look at the map of missing and abducted along Route 29 -- it's not a normal pattern."