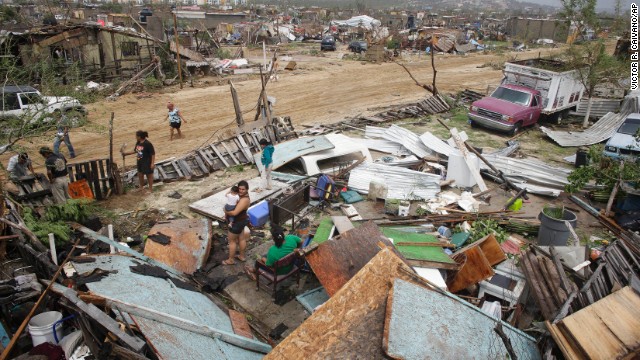 After Hurricane Odile destroyed houses in Los Cabos, Mexico, people sift through what's left on Monday, September 15. A day earlier, the storm made landfall at the southernmost tip of Mexico's Baja California peninsula. 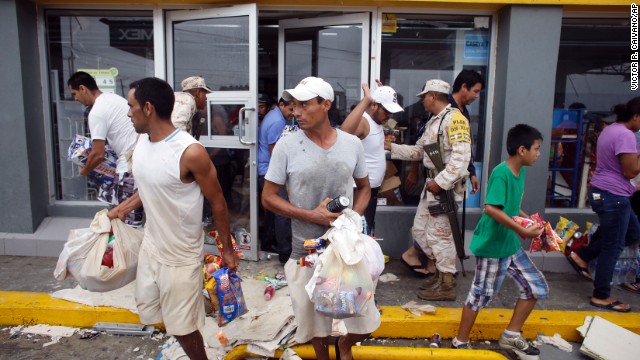 People take items from a Los Cabos convenience store that was destroyed by Hurricane Odile on September 15. 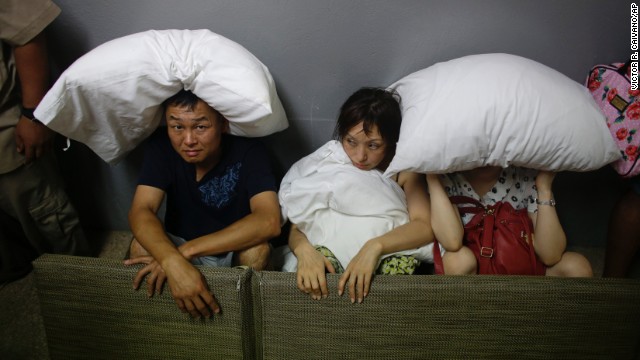 A family from San Jose, California, covers themselves with pillows as they sit in the service area of a Los Cabos resort on September 15. 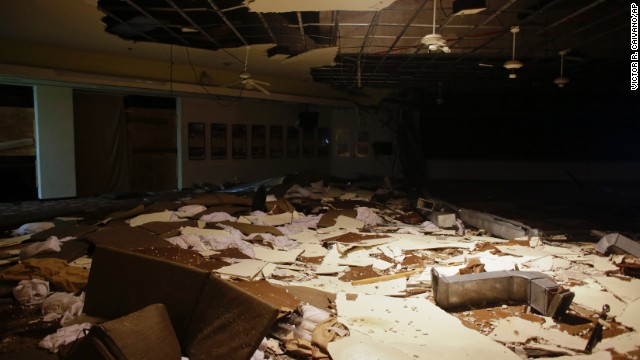 A shelter at a Los Cabos resort is damaged by winds on September 15. 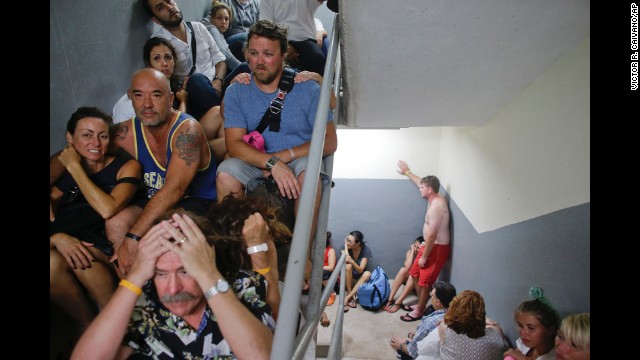 Tourists sit in a stairwell after a resort's shelter was damaged September 15 in Los Cabos. 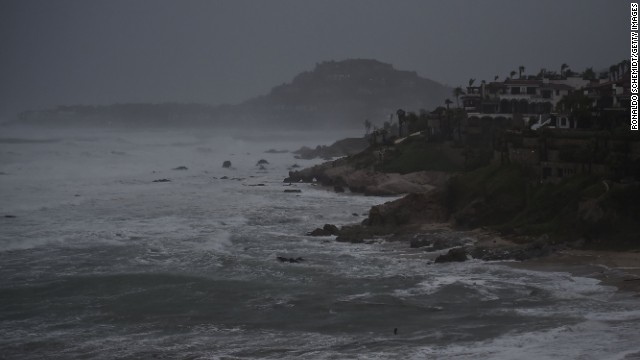 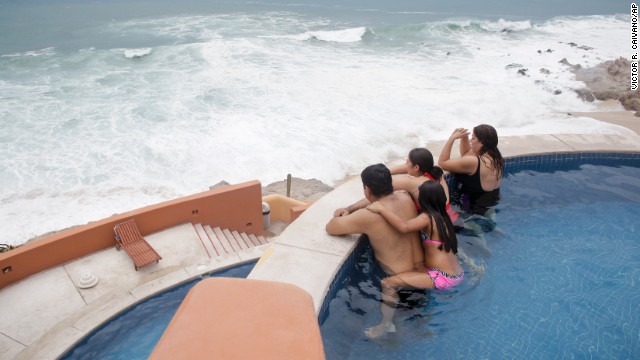 Tourists watch the ocean from inside a swimming pool at a resort in Los Cabos on September 14. 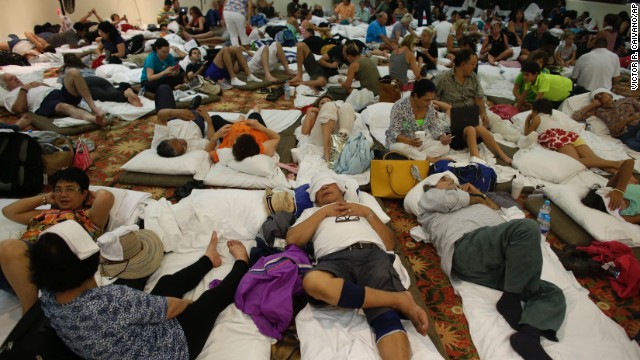 Tourists rest inside a shelter at a resort in Los Cabos on September 14. 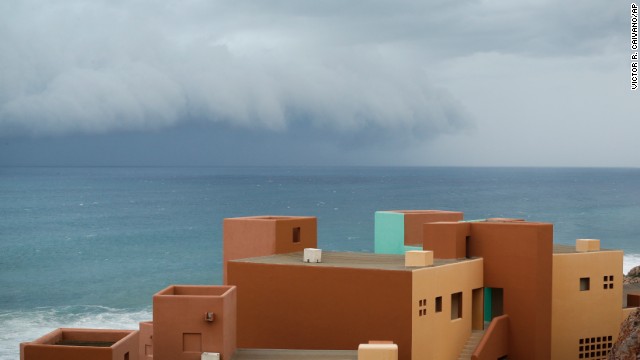 (CNN) -- The once-powerful Hurricane Odile weakened to a tropical storm as it worked its way across the Baja California peninsula early Tuesday.

Still packing 65 mph winds, the storm lashed the region with torrential rains and the potential for flash flooding, according to the National Hurricane Center. Rainfall amounts of 6-12 inches are forecast, with isolated amounts of up to 18 inches.

Odile left a mess in its wake -- snapped palm trees, washed out roads and tapped tourists trapped at Mexican resorts.

The storm left stunned residents and tourists in its wake.

Last day of vacation 'suite' The room is already so loud bc of the wind. Gonna be a long night. #odile #cabo pic.twitter.com/lFvf3IOd3I

Sarah McKinney, who was in Cabo San Lucas on maternity leave from her job in Arkansas when the then-Category 3 storm hit with 125 mph winds Sunday night, tweeted photos of the wreckage Monday: the collapsed roof of a restaurant, a shuttle van flipped over, a resort's swimming pool pushed into the ocean.

Every car she walked by after the storm had broken windows, she wrote. The normally pristine marina in the idyllic resort town was littered with debris.

2 days ago we walked along the marina happy with not a care in the world. Today I'm shocked and saddened. #Odile pic.twitter.com/AK9RO65m3Y

"2 days ago we walked along the marina happy with not a care in the world," she said. "Today I'm shocked and saddened."

Early Tuesday the storm was about 25 miles (40 km) west-northwest of Santa Rosalina, Mexico, packing winds of 65 mph (100 kph) as it headed northwest. It was expected to continue to weaken, becoming a tropical depression on Wednesday, forecasters said.

On Sunday, gales from Odile whipped torrents of rain ashore, chasing visitors in popular tourist destinations into close quarters. Streets in Cabo San Lucas were drenched. Palm trees were knocked over, and outdoor markets were trashed.

Raul Frias, from Mexico City, was at Club Regina in Cabo when he tweeted that he felt a "great vibration" in a shelter and that something "big was coming down."

McKinney and her newborn daughter, Madison, had already evacuated out of harm's way from their first hotel to a second one. But even there, the room roared like a wind tunnel as Odile passed over.

She piled up her belongings in the bathtub to protect them from the water seeping through the door to her room. She dammed it up with a mattress, but it still came in about an inch deep.

"I've cleared the beds and linen closets and have my daughter and I held up in the bathroom," she told CNN.

"The pressure was horrific, but now it is eerily calm -- just how people describe when the eye passes over," she said.

But then the winds smacked the hotel again, and McKinney headed back into the bathroom.

"The backhalf is definitely worse," she posted to Twitter. "More debris and stronger winds and rain. Bedroom is getting soaked from water seeping in."

As hurricane season is in full swing, here's a look at the storms and their impact.
Female hurricanes deadlier than male hurricanes
updated 7:44 AM EDT, Tue June 3, 2014

Apparently sexism isn't just a social problem -- if you're in the path of a hurricane, gender bias might actually kill you.
El Niño could mean fewer storms in Atlantic
updated 5:12 PM EDT, Thu May 22, 2014

The U.S. could be in for another quiet hurricane season this year.
2014 Atlantic Hurricane Season
updated 2:39 PM EST, Tue December 2, 2014

Here is a look at what you need to know about the 2014 Atlantic hurricane season.
Keep a hurricane preparation checklist
updated 12:20 PM EDT, Fri October 26, 2012

In areas where hurricanes can strike, it's a good idea to have a closet or an area set aside for storm preparedness storage.
Food in a weather emergency

All you need to know about keeping your food safe to eat and what to have on hand in the event of a weather emergency.
Staying safe when the lights go out
updated 7:39 PM EDT, Thu July 3, 2014

Water jugs and batteries are not the only things to consider when extreme weather threatens.
Hurricane statistics
updated 10:52 AM EDT, Thu June 5, 2014

Here's a look at some hurricane statistics you need to know.
What to know: Hurricane season
updated 11:53 AM EDT, Wed May 28, 2014

Here's a look at what you need to know about the Atlantic hurricane season, which runs from June 1 to November 30.
Keep your phone charged in a power outage
updated 5:57 AM EST, Sat February 9, 2013

In our increasingly digital world, a mobile phone or other portable device is often a one-stop communication device.
Include pets in emergency plan
updated 3:23 PM EDT, Thu August 30, 2012

You don't have to leave your pets behind in a disaster. Here are ways to keep them safe.