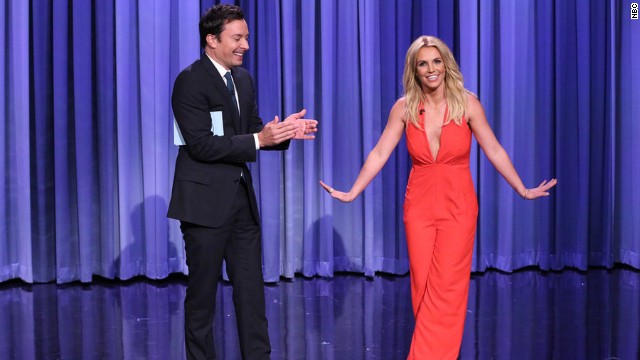 Jimmy Fallon said he signed Britney Spears up for Tinder before the September 9 episode of "The Tonight Show."
STORY HIGHLIGHTS

(CNN) -- Britney Spears is now single and ready to mingle -- maybe even on Tinder.

The 32-year-old pop star has had a very public breakup from ex-beau David Lucado in recent weeks, and has joked about being back on the hunt for "hot guys."

"Well, by now everyone knows my boyfriend cheated on me," she reportedly told the audience at one of her Las Vegas residency shows on August 31. "But the best thing about your boyfriend cheating on you is that you get to go on another first date."

When Spears appeared on Jimmy Fallon's "The Tonight Show" on Tuesday, the late-night host decided to help a girl out.

"Here at 'The Tonight Show,' we're all about making love connections. So before the show you did something cool: you let us sign you up for the dating app Tinder," Fallon told a bewildered Spears. "This is real, we made a profile for you and everything."

Turning to the audience, a chuckling Fallon said he wanted to "stress (that) Britney had nothing to do with this. This is our idea, but she has the password now and it is her profile; she can do whatever she wants with it."

How is she feeling about being on Tinder? "I'm thrilled," Spears said dryly.

But before you hop on Tinder and swipe right, you might want to note the singer's dating pros and cons.

For example, if you get nervous on a date and accidentally call her Ms. Spears, you'll get an "It's Britney, b***h" in response.