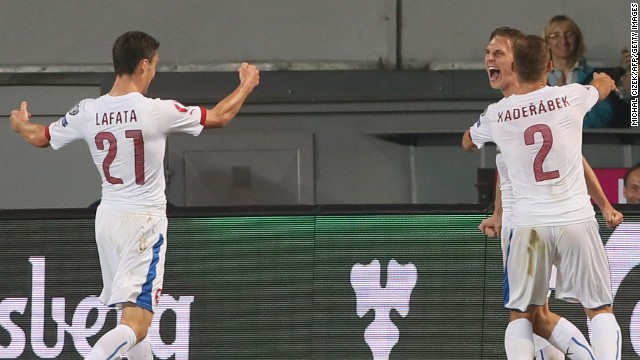 Borek Dockal, right, scored for the Czech Republic in its 2-1 win over the Netherlands in a Euro qualifier.
STORY HIGHLIGHTS

(CNN) -- No one in the Netherlands will be panicking just yet but this isn't how the Dutch wanted to start their Euro 2016 qualifying campaign.

The Netherlands -- fresh off an uplifting third-place finish at the World Cup in Brazil -- lost their first Euro or World Cup qualifier since October 2011 after a slumping Czech Republic overcame Guus Hiddink's weakened side 2-1 in Group A thanks to an injury-time effort.

It stemmed from a defensive blunder, as Daryl Janmaat's header intended for his keeper Jasper Cillessen went past Cillessen, hit the post and gave Vaclav Pilar an easy finish.

Zlatan Ibrahimovic's Sweden topped the Netherlands three years ago when the visitors had already locked up first place in their Euro 2012 qualifying group but the last time the Netherlands lost a meaningful qualifier came seven years ago against Belarus.

It wasn't the start Hiddink wanted in his second stint in charge as national team boss, especially after he saw his team fall 2-0 to Italy in a glamor friendly last week.

Hiddink has been quizzed about formations since he took over from Louis van Gaal, though the absence of winger Arjen Robben might be the biggest reason why the Netherlands only managed four shots on target against the Czechs in Prague.

Robben sparkled in Brazil, and the Netherlands' mediocre display Tuesday will strengthen claims that when he's not in the lineup, it's a different -- and less potent -- Oranje.

Borek Dockal handed the Czechs, who were winless in four games and lost 1-0 to the U.S. at home last week, the lead in the 22nd minute with a fine effort off the post.

Stefan de Vrij leveled in the 55th on a header and it appeared as if the teams would share the points. But in the first minute of injury time, Pilar struck to deliver the Czechs' first win over the Netherlands since a 3-2 result -- that match was a classic -- at Euro 2004.

The last time Italy played a competitive international, it garnered even more attention than usual.

Not because of a win, but Luis Suarez's antics.

Suarez bit defender Giorgio Chiellini -- an offense for which he later received a lengthy ban from FIFA -- and to rub salt into the wounds his Uruguay bundled out Italy in the group stage in Brazil.

It was the second straight time Italy fell at the first hurdle at a World Cup and overshadowed the team's surprising run to the final at Euro 2012.

Out went Cesare Prandelli as manager and in came the man who led Juventus to three straight league titles, Antonio Conte. Conte demands the best from his players, expects them to be disciplined and is very much into team spirit.

He wants the players, too, to play with pride in an Italy shirt -- a shirt that he wore 20 times during his own career.

His appointment was met with approval from the likes of Juventus and Italy legend Gianluigi Buffon, and the Azzurri duly upended the Dutch in Bari, Italy.

Did soccer star BITE other player?!

In Conte's first competitive match as manager Tuesday, Italy ended a 77-year drought by topping Norway 2-0 in Group H. Not since 1937 had Italy triumphed in Norway.

Conte didn't include striker Mario Balotelli in the squad for the two games and he was without the injured Andrea Pirlo, Giuseppe Rossi, Chiellini and Andrea Barzagli.

But the squad he assembled was plenty good enough to defeat the Norwegians, who last played in a major tournament at Euro 2000.

Simone Zaza of modest Sassuolo in Serie A was the star man, opening the scoring in the 16th minute with a deflected effort from a tight angle, hitting the crossbar after a burst of pace in the 77th and seeing his chip cleared off the line moments later.

Leonardo Bonucci's free header in the 62nd minute accounted for the second goal.

Joshua King created mild panic in and around the Italy box in the first half but wasn't a factor in the second as Italy bossed proceedings.