(CNN) -- Two more celebrities have joined comedian Drew Carey in offering a reward to find those responsible for using the widespread ice bucket challenge trend to trick an autistic teenager into being drenched with a bucket of urine, feces and spit.

Jenny McCarthy and Donnie Wahlberg joined Carey on Sunday in offering $10,000 each over Twitter to find those behind the prank on the student from Bay Village, Ohio.

"If the Bay Village PD wants to start a reward fund to find who did this, contact me. I'll donate $10k," Carey tweeted over the weekend.

If the Bay Village PD wants to start a reward fund to find who did this, contact me. I'll donate $10k. http://t.co/ugqeLbu5ob

Bay Village is a suburb of Cleveland, Carey's hometown and the city where "The Drew Carey Show" was based.

A video of the prank shows the teen standing outside a garage door in his underwear when someone from the rooftop dumps a bucket of murky brown fluid over his head.

The 15-year-old boy's mother told CNN affiliate WJW-TV in Cleveland that the video was discovered on her son's cell phone.

"He was embarrassed because he did not know what the contents were until afterwards, and then he didn't want anybody to know," the mother told the station. "They used his phone to tape it, and they put it up on Instagram." 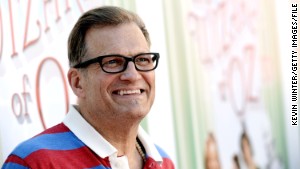 Drew Carey offered to donate $10,000 as a reward to find who was responsible for a prank on an autistic teenager.

The stunt appears to be a spoof of the ALS ice bucket challenge in which participants get a bucket of ice water dumped over their heads. The campaign raises awareness and donations for research on Amyotrophic lateral sclerosis, also known as Lou Gehrig's disease. According to the ALS Association, the Ice Bucket Challenge has raised more than $110 million.

The Bay Village police said it has been interviewing witnesses and trying to identify those involved.

"Preliminary information suggests this occurred prior to the start of the school year at a home in Bay Village," the department said.

"We understand the collective community anger. It is the hope of our community that this anger will be channeled into a positive action and supporting organizations such as Autism Speaks."

The Bay Village Schools superintendent said the school district is "heartsick over the cruel actions taken against one of our students."

"Many of our students and staff members have been participating in fundraising for ALS through the Ice Bucket Challenge," Superintendent Clint Keener wrote. "It hurts us deeply to see such a wonderful effort twisted to deliberately cause someone pain."

Let's face it -- it doesn't take much to convince us to do ridiculous things, document them and share them on the Internet.
Ice Bucket Challenge: Politicians get soaked

Top tech CEOs are taking the "Ice Bucket Challenge" to raise awareness for ALS... and Richard Quest joins the fun.
Can you face the 'ice bucket challenge?'
updated 4:45 AM EDT, Tue August 12, 2014

Celebrities and sports stars are raising money for ALS by taking the "ice bucket challenge." Affiliate WCVB has more.