Get rid of assault weapons 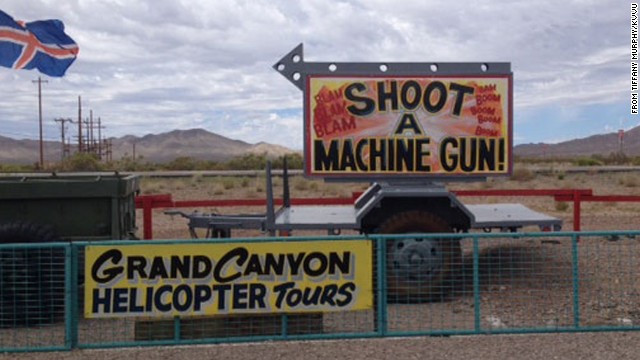 A girl killed a gun instructor as he was teaching her to shoot an Uzi at this Arizona outdoor shooting range.
STORY HIGHLIGHTS

Editor's note: Jay Parini, a poet and novelist, teaches at Middlebury College in Vermont. He has just published "Jesus: The Human Face of God," a biography of Jesus. Follow him on Twitter@JayParini. The opinions expressed in this commentary are solely those of the author.

(CNN) -- The gun outrages continue, the latest the shooting of a gun instructor in Arizona by a 9-year-old girl who was taken to the range by her parents so she could shoot an Uzi, an Israeli-made submachine gun.

The question that the whole world asks is this: Why was a 9-year-old girl allowed even to try to shoot a submachine gun?

I have a further question: Why does anybody not on the front lines of the military in a war zone need to have access to a submachine gun?

It's not as though we haven't had plenty of evidence that this gun thing in America isn't working. Since the ghastly massacre of elementary school children at Sandy Hook on December 14, 2012, by a deranged teenager, as of June there were at least 74 school shootings, on school grounds or in schools themselves. It's commonplace in this country now: A deranged shooter appears, armed to the teeth, out of his mind. Everyone ducks or runs for cover. The shooter proceeds calmly through the building, taking out innocents.

What kind of country have we become? Was this what the Founding Fathers had in mind?

The NRA will scream: The Second Amendment! The Second Amendment! Please be aware that most of what you think you know about the history of this amendment is nonsense. Many good books and articles exist on the subject, all neatly summarized by Saul Cornell a couple of years ago. He wrote: "If the nation truly embraced the Second Amendment as it was originally written, it would be the NRA's worst nightmare."

Look at this amendment again: "A well-regulated militia, being necessary to the security of a free state, the right of the people to keep and bear arms, shall not be infringed."

James Madison and the others who framed this single sentence understood perfectly well that you can't have unregulated mobs running around in the streets with guns. That's why "A well-regulated militia" goes first in this single sentence. Regulation is the key concept here, which is why the framers foregrounded this clause.

So who were these militias in need of regulation? In the South, they were called "slave patrols," and they were paramilitary groups that regularly patrolled slave plantations to make sure restive slaves weren't going to rise up against their white overlords.Remember the line in the movie "Django Unchained"? Leonardo DiCaprio wonders: "Why don't they just rise up and kill the whites?" It was a real question, and the answer was that "well-regulated militias" in the Southern states kept the slaves in check.

Patrick Henry, George Mason and James Madison knew, as they considered the Second Amendment, that it would be essential if they hoped to get the Southern states to ratify the brand-new U.S. Constitution. It was designed to keep these states on board.

There were hundreds of slave uprisings in the South before the Constitution was ratified. For a full history of this, get your hands on Sally E. Haden's book, "Slave Patrols: Law and Violence in Virginia and the Carolinas." As Haden demonstrates, most men in the slave states between age 18 and 45 would have had to serve on one of these well-regulated militias at some point. The Southern states were police states designed to keep slaves in check. Their economy had been built around slavery.

It is clear in the recorded speeches of Patrick Henry and George Mason, two of the Founding Fathers, that the Second Amendment was specifically handed as a bone to the Southern states, manufactured to keep them happy. James Madison, a slave-holder himself, had no doubt about the need to keep these slave militias going in the South. He wrote about this often and without ambiguity. Thom Hartmann discussed these ideas in a recent article.

The National Rifle Association has tried to blur the historical truth about the Second Amendment. In fact, at its headquarters in Washington, the words of the amendment are emblazoned right in front of the entrance. Oops! They have emblazoned exactly half of this brief amendment, leaving off the embarrassing front part, about a "Well-regulated militia, being necessary to the security of a free State." (Notice also, the amendment says State, not Nation -- and these framers knew the difference, as it's a major difference noted elsewhere in the Bill of Rights.)

The idea that owning a gun in America was an individual right only dates to the 1980s. A bunch of right-wing think tanks got to work creating this individual right. In 1991, Chief Justice Warren Burger called this new wrinkle in the Second Amendment "one of the greatest pieces of fraud -- I repeat the word 'fraud' -- on the American public by special interest groups that I have ever seen in my lifetime."

Burger was right. It's a fraud. There just is no right for the individual to bear arms in the Bill of Rights. You have to belong to a well-regulated militia, such as the National Guard, if you want to bear arms.

Of course, the Supreme Court did an end run in recent years around what the framers of the Bill of Rights actually intended. (So much for our famous "originalists," such as Justice Antonin Scalia, who really does whatever he wants and comes up with a bogus argument to say he's going back to what the framers actually meant.) The 2008 case known as Heller is a botched piece of argumentation, as even conservative judge Richard A. Posner has written, tearing Scalia's opinion to shreds as an incoherent piece of tripe.

Let's say, however, that hunters should have the right to possess and use hunting rifles. Why not, if they keep them unloaded except for when hunting? It should be just fine to belong to a gun club and shoot skeet or whatever. But nobody needs an assault weapon who is not fighting in the Middle East, or perhaps going after drug lords in Mexico.

Why, then, do Americans love their guns? I will make a bold suggestion. In a country where Americans sense, quite genuinely, that their freedoms have been taken away by the government -- as in the U.S. Patriot Act, as in NSA surveillance -- people feel powerless. It makes you feel more powerful if you can enhance your personal strength with a gun. There is the romance of the Old West, too, which reinforces this idea. It's "High Noon" all the time in America.

But this is dangerous and false thinking, and it leads to chaos. Chaos is what we now face on the streets in this country every single day. It's time for us to revisit the Second Amendment and get every assault weapon off the streets, for good.