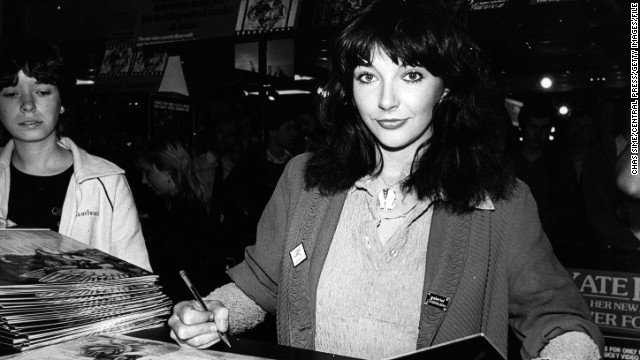 Kate Bush in 1980 -- a year after her last tour. She started a 22-show run in London Tuesday.
STORY HIGHLIGHTS

(CNN) -- After 35 years away, British singer Kate Bush returned to the stage Tuesday night -- and the response was rapturous.

"There was something thrilling about seeing the often bonkers but still delightful imagination of Bush run free after all this time," wrote Bernadette McNulty in the UK Telegraph about the show at London's Eventim Apollo, which included giant paper airplanes, reptilian monsters and sets with odd perspectives. Novelist David Mitchell ("Cloud Atlas") contributed some of the narrative.

"She moves with a lithe grace, clearly still drawing on the mime training she underwent as a teenager forty years on. Her voice too is in remarkable condition: she's note-perfect throughout," wrote Alexis Petridis in the Guardian.

"The most ambitious piece of theatrical pop ever seen on a British stage," noted the Independent.

The show, titled "Before the Dawn," has been hotly anticipated for months. The 77,000 tickets, for a run of 22 concerts, sold out in minutes back in March. Fans are coming from all over the world to see her -- and, in some cases, paying dearly for the privilege.

Among those in attendance: David Gilmour (who helped get her career started), Bjork, Lily Allen and actress Gemma Arterton.

The first-day visitors were glad they came.

"It was just hypnotic," one spectator told the Telegraph.

"Kate Bush last night was phenomenal, one of the best shows I've ever seen," wrote singer Anna Calvi on Twitter.

Kate Bush last night was phenomenal, one of the best shows I've ever seen

The show wasn't without its complaints -- mainly over a request to not use smartphones.

"(Personnel) are patrolling for phones in a very intense way," noted the Guardian in a live blog.

Bush is known for her acrobatic voice and expansive, thoughtful albums, that have sometimes come out years apart -- which only makes her fans more frantic in anticipation. In the U.S., she's probably best known for the 1985 album "Hounds of Love," which contained the single "Running Up That Hill," and her duet with Peter Gabriel, "Don't Give Up," which appeared on Gabriel's 1986 album "So."

She has been reluctant to perform live for a number of reasons. There have been rumors of stage fright and fear of flying. She became a mother and wanted to raise her son, Bertie (who was a key supporter in bringing her back, she wrote in the show program.) There was also a dark experience at the beginning of her previous tour, in 1979, when her lighting director died in a fall.

As recently as 2011, she was uncertain she would ever play live again.

"I still don't give up hope completely that I'll be able to do some live work, but it's certainly not in the picture at the moment because I just don't quite know how that would work with how my life is now," she told the UK music publication Mojo.