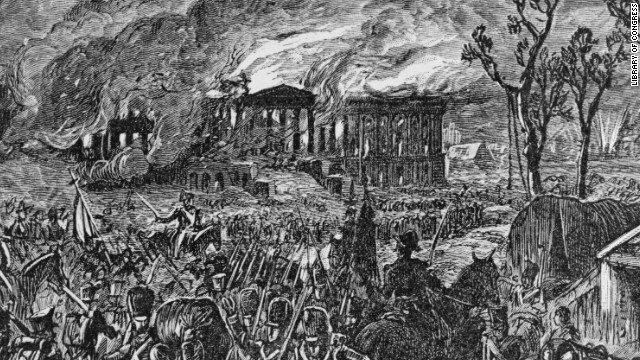 British redcoats burned the White House and other buildings in Washington 200 years ago this month.
STORY HIGHLIGHTS

The British Embassy in Washington has apologized after tweeting a photo marking the 200th anniversary of British troops burning the White House on August 24, 1814, during the War of 1812.

The photo shows a cake featuring the White House, a few sparklers and the Stars and Stripes and Union Jack. Included in the caption: "Only sparklers this time!"

Commemorating the 200th anniversary of burning the White House. Only sparklers this time! pic.twitter.com/QIDBQTBmmL

Not everyone was amused.

One person said on Twitter found the post "in extremely POOR TASTE." Another asked: "What the hell? A commemoration?"

Whereupon the right honorable Embassy sought to make amends. It published a "we're sorry" tweet noting that it "meant to mark an event in history & celebrate our strong friendship today." It also linked to a Huffington Post piece by Patrick Davies, its deputy ambassador to the United States.

Apologies for earlier Tweet. We meant to mark an event in history & celebrate our strong friendship today http://t.co/gs3heJDMzt

He noted that the countries are "closer today than ever," the redcoats' torching of the White House 200 years ago notwithstanding.

"Far from fighting each other, our soldiers, sailors and airmen train together, deploy together and recuperate together," he wrote.