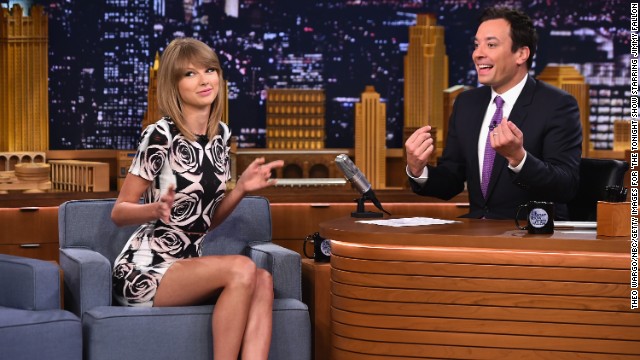 (CNN) -- Are Taylor Swift and country music never, ever, ever getting back together?

Swift released a video Monday for her new single, "Shake It Off," and the song is decidedly more pop than fans are used to from the country singer. It's all in keeping with her fifth studio album, "1989," which Swift announced during a Yahoo livestream.

The new album's title is a nod to the year Swift was born and is being hyped as the star's "first documented official pop album."

Swift sports multiple personas in the music video, including one that is reminiscent of Lady Gaga. The song is an ode to the "haters" that Swift is shaking off -- and, of course, there is the dancing.

"All I think about are metaphors and cats," Swift said in the livestream. "Life itself and who people actually are can be greatly reflected in how people dance. ... I don't mean how good you are but your willingness to dance."

Writing for USA Today, Brian Mansfield said Swift's message seems to be "Hate me all you want ... but you're missing all the fun."

"Lyrically, 'Shake It Off' is 'Mean 2.0,' with the 24-year-old singer/songwriter taking all the criticisms leveled at her and dismissing them flippantly," Mansfield writes. "It's a total swerve musically, however, with horn-blast grooves grounded in early '60s proto-soul and girl-group pop, plus a spoken-word breakdown that would come off as awkward if it weren't so knowingly funny."

Twitter immediately embraced the tune, including some high-profile fans. Talk show host Ellen DeGeneres tweeted, "Don't mess with @TaylorSwift13, or she will write an incredibly catchy song about you."

Don't mess with @TaylorSwift13, or she will write an incredibly catchy song about you. http://t.co/ryYA6Mp25I

But not everyone loved the video. It inspired some accusations of racism on Twitter.

"A number of Twitter users, including rapper Earl Sweatshirt, have accused Swift of perpetuating black stereotypes," Cleveland.com writer Troy L. Smith reported. "Many have pointed out that while all of the graceful ballerinas in the video appear to be white, most of the twerking close-ups feature black dancers (there are white women twerking as well)."

Swift's album will be released October 27. The single is currently available on iTunes.