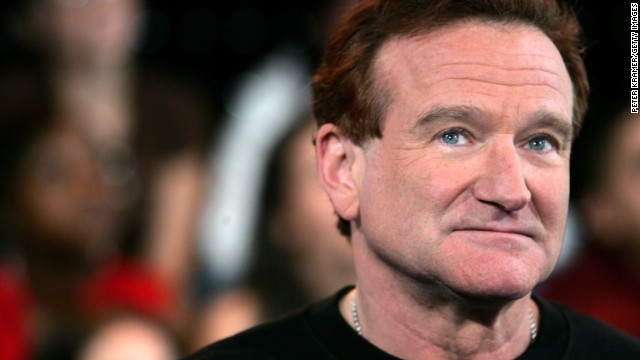 (CNN) -- The sudden death of Academy Award-winning actor and comedian Robin Williams has sent shock waves throughout the world. The 63-year-old was not only known for bringing laughter to so many throughout his career but for bringing compassion to his philanthropic causes as well.

Impact Your World remembers Williams' generosity by looking at some charities with which he worked.

The United Service Organization (USO) was a perfect fit for the comedian. The goal of the organization is to lift the spirits of American troops, and that's exactly what Williams did. During his USO tours, the "Good Morning, Vietnam" star traveled to war zones entertaining troops from Afghanistan to Kuwait.

Our hearts are heavy and our thoughts and prayers are with Robin Williams family.

The entertainer and Christopher Reeve were very close friends. They formed an inseparable bond as roommates while studying at New York's Julliard School.

We are deeply saddened by the death of distinguished alum, generous supporter @robinwilliams He will be missed by all http://t.co/geLkCMUR7A

Williams was the first to bring a smile to his college buddy's face after Reeve's 1995 horseback riding accident left him paralyzed from the neck down. In Reeve's autobiography "Still Me," he wrote how Williams made a surprise hospital visit impersonating a Russian proctologist and was going to perform an exam on him!

Friends 'til the end. #RobinWilliams http://t.co/uem2F7vbne

The comedic actor was a friend to people of all ages.

We send our deepest sympathies to the family of Robin Williams. Thank you for bringing laughter to the patients and families of St. Jude.

In 2006, the father of three was honored with the Muhammad Ali Humanitarian Award at Celebrity Fight Night. The annual event raises money primarily for the Muhammad Ali Parkinson Center in Phoenix. Reba McEntire has emceed the benefit dinner and auction for the past nine years and recalled her favorite memory of Williams.

My favorite memory of @robinwilliams... https://t.co/zJkRGBGDwe

She added, "I will miss Robin so much, as we all will. Thank God we have so many wonderful memories of him, his wit, talent, big heart and generosity."

The late actor was also involved with Comic Relief to raise money for those in need, especially America's homeless.

He hosted a series of HBO TV specials with comedian friends Billy Crystal and Whoopi Goldberg.

Comic Relief founder Bob Zmuda remembered Williams' generosity on CNN's "New Day": "Robin was the one from the get-go that was really insistent that we would raise funds for the homeless community. Robin was kind of born with a silver spoon in his mouth. ... I think he felt that he was given so much and that he needed to give back and he truly did."

Videos: The world according to Robin Williams

Robin Williams, who first made America laugh and eventually touched "every element of the human spirit" in a remarkable range of performances, died at age 63.
Complete coverage

See our complete coverage as we remember comedian and actor Robin Williams.
The world according to Robin

Watch and remember the career of Robin Williams by revisiting some of his best moments from stage, film, and television.
Comedic actor Robin Williams
updated 10:02 PM EDT, Sat October 25, 2014

Robin Williams gave a lot of advice and his words carry as much power now as they ever did.
Robin Williams: Full of talent, full of demons, full of heart
updated 12:33 PM EDT, Thu August 14, 2014

Of all the things to say about Robin Williams, the truest may be this: He made people smile.
Entertainment world mourns passing of Williams
updated 4:59 PM EDT, Tue August 12, 2014

A collection of some of the beloved comedians' more colorful stand-up moments throughout the years.
Behind Williams' genius was the great comic Jonathan Winters
updated 6:00 PM EDT, Wed August 13, 2014

Before Robin Williams, there was Jonathan Winters.
I met Robin Williams: Your stories of the comic legend
updated 12:03 PM EDT, Mon August 18, 2014

Robin Williams was not only known for bringing laughter to so many throughout his career but for bringing compassion to his philanthropic causes as well.
Robin Williams: The man beyond the screen
updated 11:14 AM EDT, Wed August 13, 2014

Who was Robin Williams?
Williams leaves behind 4 films to be released
updated 4:22 PM EDT, Tue August 12, 2014

There didn't seem to be too much that Robin Williams couldn't do.
Robin Williams: King of talk show guests
updated 12:13 PM EDT, Tue August 12, 2014

There was never a dull moment when Robin Williams sat in the guest's chair. Here are some of the best.
Where to stream his essential performances
updated 5:33 PM EDT, Tue August 12, 2014

Robin Williams, who died Monday at age 63, was Peter Pan to some, Mrs. Doubtfire to others, and a beloved actor to many.
Robin Williams' beloved movie characters
updated 4:20 PM EDT, Tue August 12, 2014

Here's a look back at some of the more than 100 movie characters that actor Robin Williams brought to life.
7 Robin Williams movies that made your childhood
updated 8:00 AM EDT, Wed August 13, 2014

If there was any actor who could make the entire family laugh, it was Robin Williams.
Patients' families remember 'comedic Mother Teresa'
updated 2:13 PM EDT, Tue August 12, 2014

As a medical student who used humor to help his patients, Robin Williams' role in "Patch Adams" was touching and memorable.
Robin Williams and the dark side of comedy
updated 3:36 PM EDT, Tue August 12, 2014

By tradition, Drama is represented by two masks: the happy face of the comic muse Thalia and her sad counterpart, the tragic muse Melpomene.
Comedic geniuses who left us too soon
updated 12:45 PM EDT, Tue August 12, 2014

He could do 'em all! Check out some of Robin Williams' best impressions.
Williams' wife: I am utterly heartbroken
updated 8:11 PM EDT, Mon August 11, 2014

Video: A statement from Robin Williams' wife confirms: "This morning, I lost my husband and my best friend."