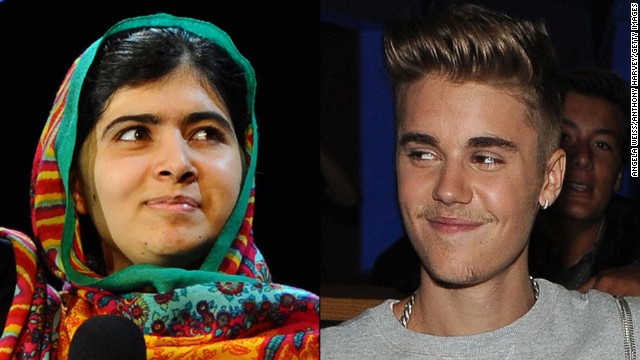 (CNN) -- Justin Bieber's newest friend is Malala Yousafzai, the Pakistani schoolgirl who survived an attack by the Taliban and now advocates for girls' rights.

Yousafzai has met with President Barack Obama, Queen Elizabeth II and many others, but her online encounter with Bieber on Wednesday is likely to make her the envy of teen girls around the world.

Bieber, 20, made sure his fans knew, posting a screenshot of his conversation with the 17-year-old activist on Twitter: "Just got to FaceTime with Malala Yousafzai. She has such an incredible story. I can't wait to meet her in person and talk about how I can support her and the @malalafund. #love"

Just got to FaceTime with Malala Yousafzai. She has such an incredible story. I can't wait to meet her... http://t.co/i295THc8pQ

The Pakistani Taliban targeted Yousafzai for assassination in 2012 because of her outspoken support for girls' education in her native country. 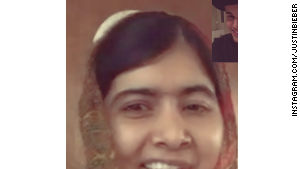 Justin Bieber posts sceenshot on Instagram of his FaceTime with Malala Yousafzai.

Yousafzai, who has not posted any tweets about her time with Bieber, did confide to CNN's Christiane Amanpour last year that she was a Bieber fan.

Bieber's representative said she had "no official comment," including about if there are plans for the two to meet in person.

The Bravest Girl in the World

Who is Malala Yousafzai?

Despite Bieber's reputation as an out-of-control celebrity, earned partly from three arrests earlier this year, the pop idol has an impressive track record of good deeds.

Bieber has helped grant the wishes of more than 200 children through the Make-A-Wish Foundation, which fulfills the wishes of children diagnosed with a life-threatening medical conditions. 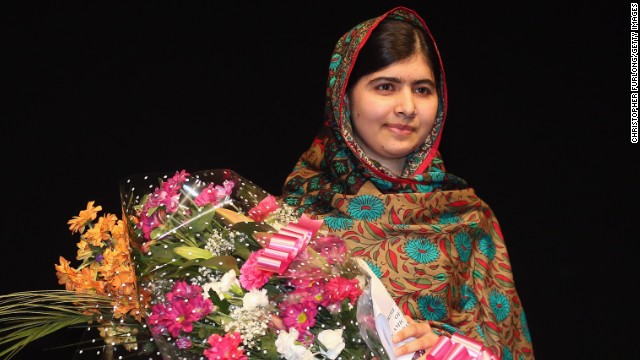 Malala Yousafzai poses on stage in Birmingham, England, after she was announced as a recipient of the Nobel Peace Prize on Friday, October 10. Two years ago, the 17-year-old was shot in the head by the Taliban for her efforts to promote education for girls in Pakistan. Since then, after recovering from surgery, she has taken her campaign to the world stage. 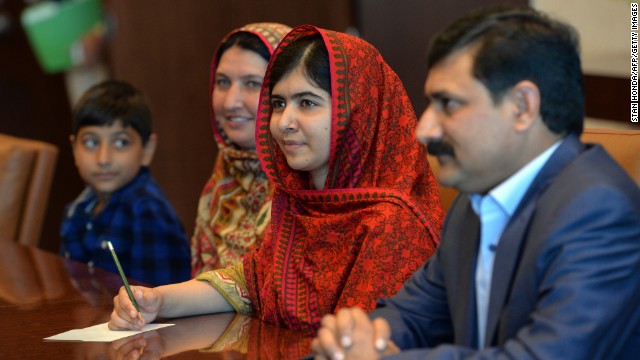 Malala and her family visit the United Nations headquarters in New York before meeting with U.N. Secretary General Ban Ki-moon in August. 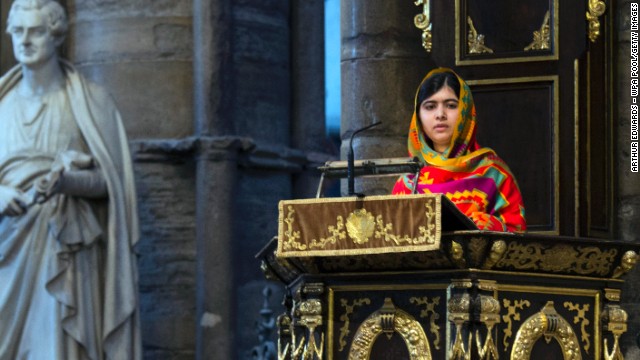 Malala speaks during the Commonwealth Day observance service Monday, March 10, at Westminster Abbey in London. Malala has lived in Britain since the Taliban attack. 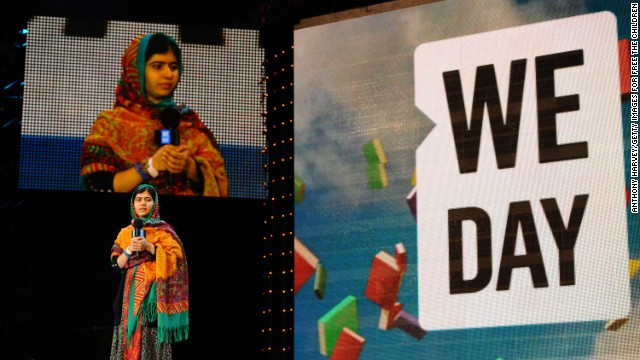 Malala speaks at a youth empowerment event at London's Wembley Arena in March. 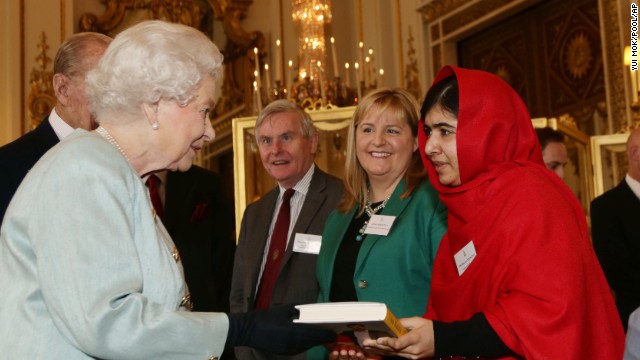 Malala gives a copy of her book to Britain's Queen Elizabeth II during a reception at Buckingham Palace in October 2013. 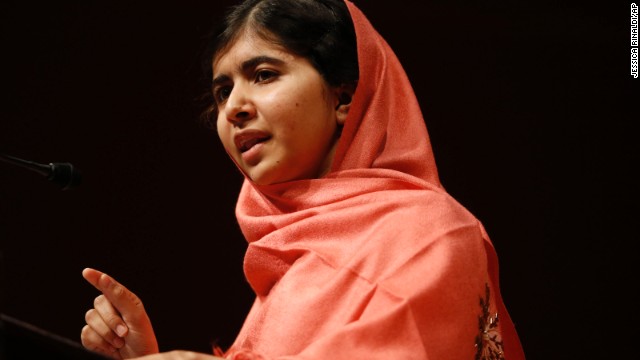 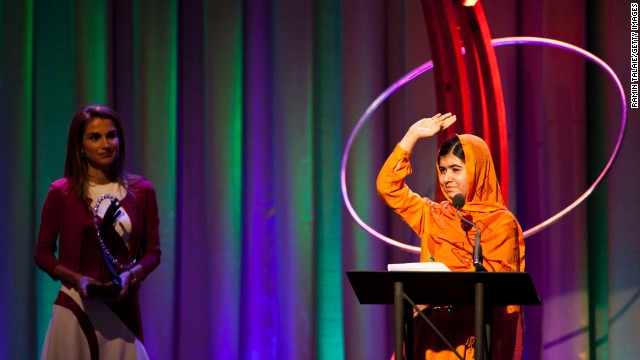 Queen Rania of Jordan presents Malala with the Leadership in Civil Society Award at the Clinton Global Citizen Awards ceremony in New York in September 2013. 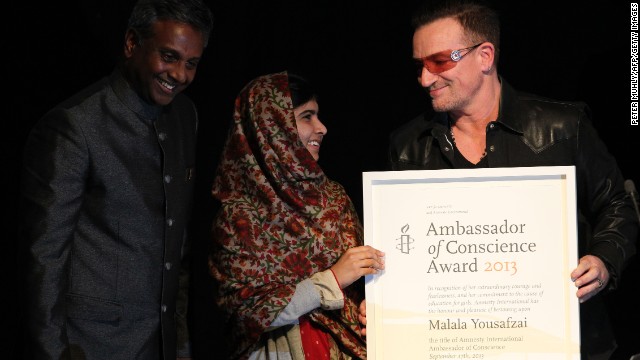 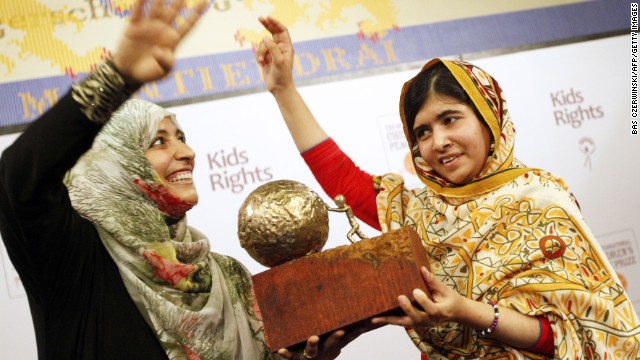 Malala receives a trophy from Yemeni civil rights activist Tawakkol Karman after being honored with the International Children's Peace Prize in The Hague, Netherlands, in September 2013. Karman was one of the Nobel Peace Prize winners in 2011. 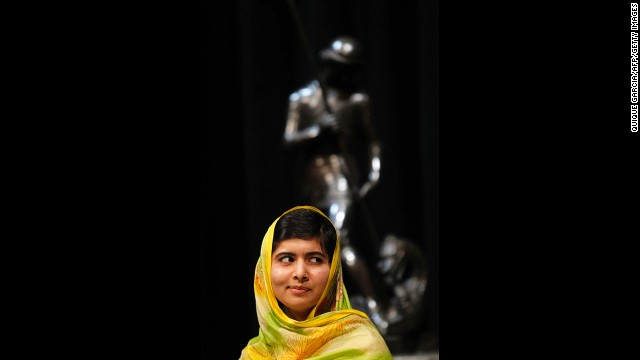 Malala receives the 25th International Prize of Catalonia in July 2013 in Barcelona, Spain. The award recognizes those who have contributed to the development of cultural, scientific and human values around the world. 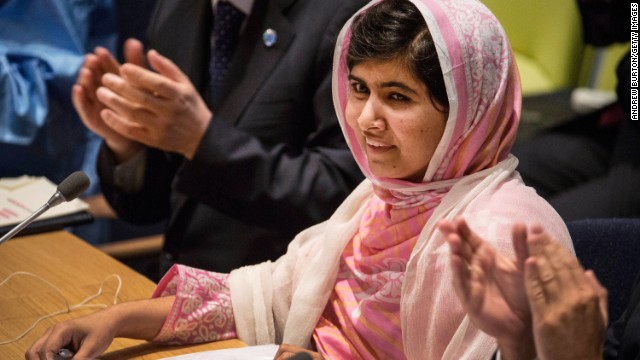 Malala is applauded before she speaks at the United Nations Youth Assembly in New York on July 12, 2013, her 16th birthday. "They thought that the bullets would silence us, but they failed," she said. "And then, out of that silence, came thousands of voices." 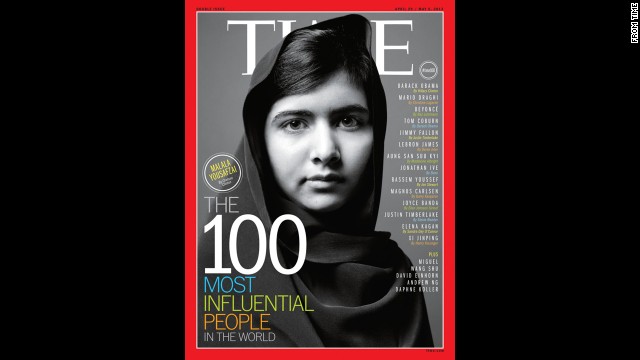 Malala was one of seven people featured on the cover of Time magazine's 100 most influential people edition in April 2013. 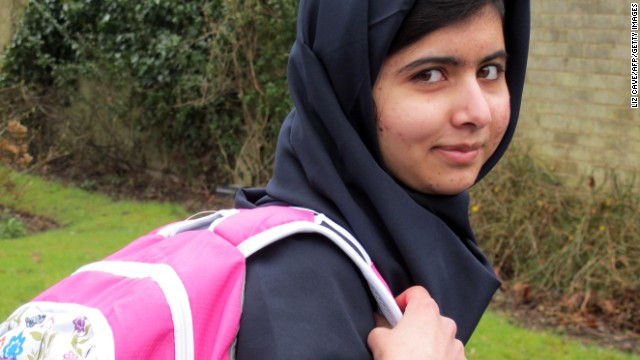 Malala returns to school at Edgbaston High School for Girls in Birmingham, England, on March 19, 2013. She said she had "achieved her dream." 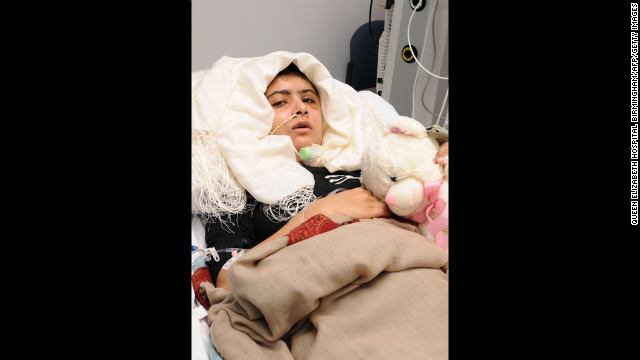 Malala recovers after receiving treatment at Queen Elizabeth Hospital in Birmingham on October 19, 2012. Doctors covered the large hole in her skull with a titanium plate. The teen suffered no major brain or nerve damage, and she even kept the piece of her skull that was removed as a souvenir of her fight. 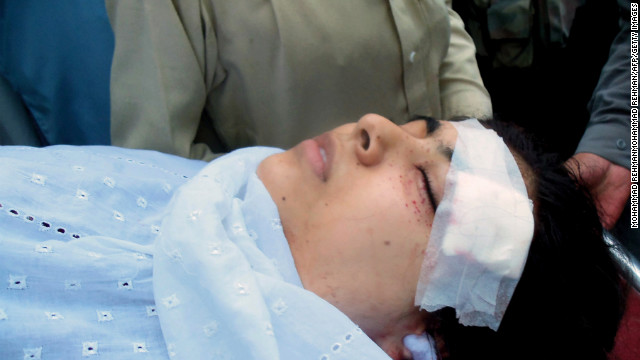 One recent recipient was Grace Kesablak, who was Bieber's date to the Young Hollywood Awards in Los Angeles last month whe the singer was given the "Champ of Charity Award."

Bieber is on supervised probation for egging his neighbor's mansion in January. He also has a pending drunken driving charge in Miami and an assault charge in Toronto.