Editor's note: LZ Granderson is a CNN contributor, a senior writer for ESPN and a lecturer at Northwestern University. He is a former Hechinger Institute fellow and his commentary has been recognized by the Online News Association, the National Association of Black Journalists and the National Lesbian and Gay Journalists Association. Follow him on Twitter @locs_n_laughs. The opinions expressed in this commentary are solely those of the author.

(CNN) -- Robyn Lawley, an Australian plus-size model, is getting a cyber-standing ovation for posting unretouched and makeup-free photos of herself on Facebook in protest against the pathological airbrushing we've grown accustomed to in professional photography. It's a bold move for the 25-year-old, who was also a vocal critic of the recent Sports Illustrated swimsuit issue.

Her message to women everywhere is clear: Beauty comes in many sizes.

The problem is, Lawley is not what average people would call plus-size.

In fact, when I initially saw her unretouched photos, I kept scrolling through the gallery looking for her unretouched photos. Her natural beauty is undeniable, but if her body is what the fashion industry is calling plus size, that world is more screwed up than we know. Like, seriously, what kind of hallucinogen do you have to take in order to look at Lawley and think she's on the heavier side? At worst she looks like a fitness instructor at one of those gyms where the women show up in full makeup. 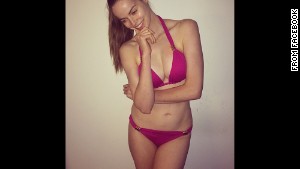 An un-retouched image that Australian model Robyn Lawley posted to her Facebook page showed the plus-sized model in a bikini.

I've been to Australia.

There are plus-size women there.

Lawley, for all of her bravery, should not be considered among them.

Jennifer Lawrence goes off on fat-shaming

A sizing trick to make you feel skinny

It's the body image distortion that crammed her into that category, which, for actual plus-size women, can't be a good thing. If a size 6, or even 8, 9, or 10, is the industry's idea of a plus-size woman, then how should the average American woman -- who weighs roughly 165 pounds and wears size 12 or 14 -- describe herself? Morbidly obese?

Of course not, which is why size designations have been massaged over time. Many women apparently don't want to know their true size, so what was a size 14 or 16 in the 1950s is an 8 today. Vanity sizing, they call it.

This ridiculous shell game is how Lawley, who is a size 12, can be both a plus-size role model and on the thin side of average at the same time.

And while this sickeningly unrealistic idea of what we should look like is something mainly inflicted on women, men are not immune.

The receding hairline of England's Prince William was infamously resurrected as an issue on a 2010 cover of Hello magazine. Tennis great Andy Roddick's arm grew by 10 inches for his 2007 Men's Fitness cover. Cosmopolitan compiled a hilarious gallery of Photoshopped male celebrities like Jon Hamm next to pictures of how they actually look.

Earlier this year male model CJ Richards, talking about photo enhancement, said, "Why would you watch a movie without special effects? You understand that this isn't real. There's Photoshop in magazines and special effects in movies. I mean, it happens. So accept it and know that this is actually a real person underneath all of the computerized effects that they're adding in."

Are we really ready to take a look at 'real women'?

Fair enough. But then recall the fat-shaming of Prince Fielder after he posed nude in ESPN the Magazine's Body Issue. Or notice such things as the increase in steroid use among young men; global sales of male toiletries other than shaving products surpassing purchase of shaving products for the first time; and popularity of the painful sounding "Brozilian" waxes. That's when you see it's not just women who are spending money and risking their health to try to look like a picture in a magazine.

So, while it's puzzling that Lawley is considered plus-size, I guess we can say good for her for putting herself out there a bit. In an industry with such crazy ideas about what's fat, it's brave, I suppose, to put on a bikini and publish an unedited photo. Hopefully the attention she draws will shed light on how stupid it is to listen an industry that labeled her plus-size/fat in the first place.