What is the North Korean riddle?

Statues of Kim Il Sung (left) and Kim Jong Il (right) at Mansudae in Pyongyang. North Koreans gather in front of the statues to lay flowers and bow, showing their respect for the late and current leader. Tourists visiting North Korea are expected to do the same. 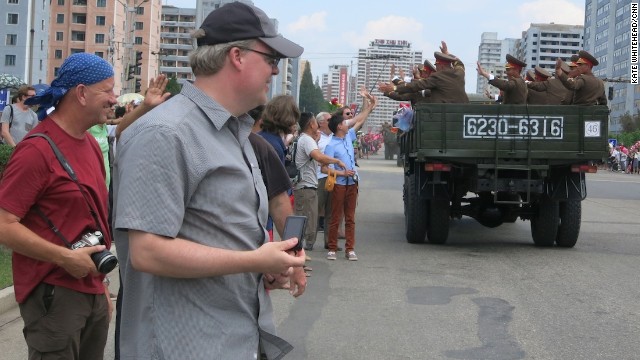 This year's Victory Day, on July 2, attracted a lot of Western tourists. The highlight of the tour was watching the military parade of tanks, troops and missiles. Many tourists got caught up in the spirit of the event, high-fiving soldiers as they drove past. 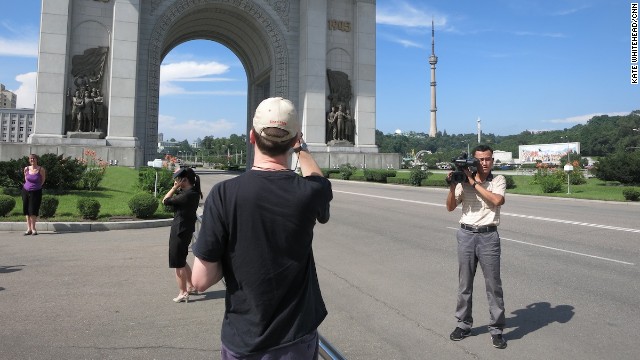 Group tours of Pyongyang are often accompanied by a North Korea cameraman, in addition to two or three guides. The cameraman accompanies the group to many of the main tourist sites and then offers tourists a DVD of their trip for about 15 Euro (US$20). Cynical tourists suggest this is a good way to monitor visitors.

A flower vendor beside a Kim Il Sung statue in Pyongyang sells bouquets of flowers to locals and tourists to lay at the foot of the statue. 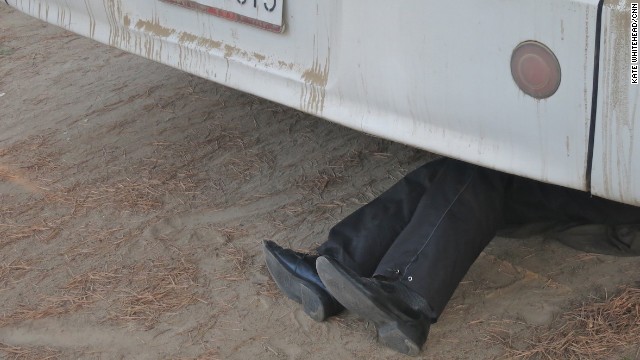 Tours of North Korea are carefully choreographed affairs so an unexpected mishap, such as the bus breaking down, visibly rattles the guides. Australian tourist Mark Freeman compares such occasional glitches to the "black cat" scene in "The Matrix."
HIDE CAPTION
Bowing is mandatory
Victory Day parade
Always watching
Paying respects
A crack in the Matrix?
<<
<

Editor's note: Frida Ghitis is a world affairs columnist for the Miami Herald and World Politics Review. A former CNN producer and correspondent, she is the author of "The End of Revolution: A Changing World in the Age of Live Television." Follow her on Twitter @FridaGhitis. The opinions expressed in this commentary are solely those of the author.

SEOUL, South Korea (CNN) -- The last bit of news I heard before boarding a plane to Seoul a few days ago was that North Korea had just fired 100 artillery shells into the sea near the border with South Korea.

Disturbing news from North Korea comes just as often as stories that make us laugh in disbelief. The many quirky, mystifying, baffling developments in Pyongyang make its young ruler, Kim Jung Un, an irresistible target for comedians.

It was hard to suppress a laugh, for example, when North Korea severely declared that an upcoming satirical Hollywood movie constituted "an act of war" and filed an official complaint with the United Nations.

Those are two sides of North Korea -- deliberately frightening and inadvertently comical. Then there's a third side -- the part that makes us gasp in horror.

A yearlong investigation conducted by the United Nations found that North Korea is a country whose depth of brutality "does not have any parallel in the contemporary world."

According to the report, North Korea engages in murder, torture, slavery and mass starvation to terrorize the population into submission. Stories from refugees who have escaped from North Korea are a chilling reminder that the regime is not just a military threat, it is causing a terrible humanitarian crisis.

North Korea is a Riddle Kingdom that is simultaneously threatening, bizarre and brutal. The regime's unpredictability is one of the factors that allow a small, impoverished state, unable to feed its own people, to stand toe to toe with much more powerful rivals.

It is those random, capricious, frequently dangerous behaviors that allow fragile, brittle, bankrupt North Korea to force its dazzlingly successful neighbor, South Korea, to maintain a constant state of alert, to wonder if its capital city can survive an attack across a border that lies just 35 miles away.

With its conventional and nuclear arsenals, North Korea manages to keep the international community, including the United States, scrambling for an approach that might neutralize the danger and send a lifeline to the victims of the cruel regime.

How to make the perfect propaganda film

Is Seoul visit a snub to North Korea?

It's tempting to ignore North Korea's antics as bluster, as empty threats. But Pyongyang has launched deadly attacks. For example, in 2010, it bombed a South Korean island about 70 miles from Seoul, killing four people. It may also have launched a torpedo that same year which sank a South Korean navy ship, killing 46. In 2013, the North detonated a nuclear device and brazenly threatened to launch a "pre-emptive nuclear attack" against the U.S. A fourth nuclear test could be imminent.

After the most recent escalation, South Korean President Park Geun-hye spoke to military leaders and told them to prepare to retaliate. She described Pyongyang as so erratic that you cannot see "even an inch ahead."

The news from North Korea can be so disconcerting that spoofs and rumors regularly make it into the news and social media as if they were fact. Ahead of the World Cup finals a satirical video purportedly showing a North Korean newscast declaring the North's team a finalist for the World Cup went viral, repeated as if it were true, as just another amusing moment from Pyongyang.

And, why not? Truth and fiction are hard to tell apart.

Pyongyang has created its own version of the world for domestic consumption. North Korean government researchers announced their country is the second happiest in the world -- second only to China. The late ruler, Kim Jung Il, was reported to have bowled a perfect game the first time he set foot on a bowling alley. He was also supposedly the world's best golfer.

The official biography of the country's rulers has looked like something out of a Marvel Comics book story. No official biography of the current Kim has been released, other than an account that says he was "born in heaven." That would fit with his father, Kim Jong Il's official story, which claims he was born under a double rainbow with the seasons spontaneously changing and a new star appearing in the sky for the occasion.

The three generations of Kim men who have ruled the North are painted as supernatural to the local population. Abroad, they are cartoonish figures, whose behavior can leave diplomats and strategists scratching their heads.

Just a few months ago, the government published a gasp-inducing racist tirade against President Barack Obama, calling him a "clown" who "does not even have the basic appearance of a human being." It suggested he live with monkeys in a zoo. Racism, a myth of racial superiority, is a striking feature of the culture promoted by the regime.

The authorities have created their own reality, brainwashed the population to keep the state functioning and the regime secure. To anyone who commits what the government deems an infraction, the punishment is inconceivably harsh.

It's all part of the riddle that keeps the world guessing, off-balance and nervous. By firing missiles, threatening neighbors and acting erratically, North Korea portrays itself as mysterious and volatile, and even that perception magnifies its ability to create fear, adding to its power and helping keep the despotic regime in control.