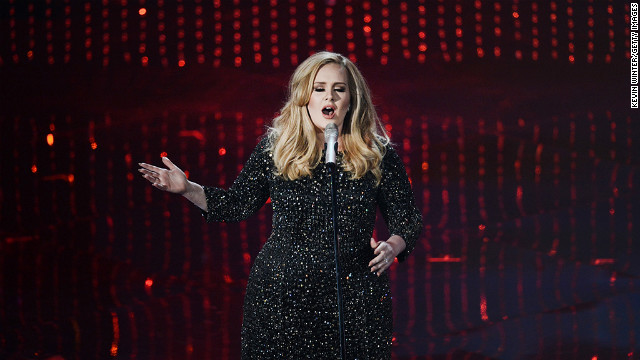 Singer Adele performs at the 2013 Oscars. "No truth" to rumor that a new album is coming, says label exec.
STORY HIGHLIGHTS

The confusion started with a tweet from the World Music Awards, an international contest that has been broadcast from such locales as Los Angeles, Las Vegas and Monaco.

There's "no truth in this," he told Billboard.

So what's the deal with the World Music Awards? It may have gotten attention for the tweet, but Billboard observed that the contest is "something of a curiosity on the international awards calendar." The American broadcast of its 2014 show was supposed to run on NBC but didn't because of "technical issues."

Adele herself has said little. She did hint in May that a new work could be in the offing, but her Twitter account has mostly been silent, with just three tweets since that May 4 post. (The most recent promoted an album by Example.)

Certainly, even a smidgen of Adele news is eagerly awaited by her fans -- and the music business, which would love to see any material equal the performance of the English singer's last record, "21."

That album sold 3 million copies through digital streaming alone, which set a record. Altogether, it's sold more than 10 million copies and topped Billboard's year-end sales list in both 2011 and 2012 -- the first album ever to do that.

Since "21's" success, Adele has won an Oscar for best original song (for "Skyfall," from the James Bond movie of the same name) and given birth to a son with her partner, Simon Konecki.